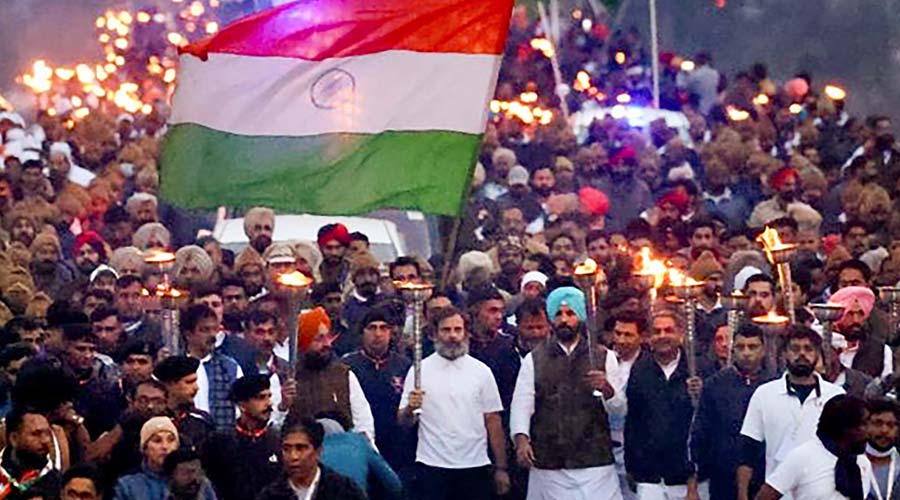 The Yatra was scheduled to reach Banihal town but halted at Ramban. Rahul Gandhi returned to Jammu.

The second leg of the Bharat Jodo Yatra was suspended on Wednesday after “shooting stones” — loose boulders falling down mountain slopes at high speed — triggered by heavy rains blocked the national highway in Jammu’s Ramban district.

A truck driver was killed and two other people were injured. They were not part of the Yatra. The Yatra was scheduled to reach Banihal town but halted at Ramban. Rahul Gandhi returned to Jammu.

The 45km road between Ramban and Banihal towns is an incomplete but dangerous stretch of the four-lane Jammu-Srinagar national highway.

Located midway between Jammu and Srinagar, it is prone to landslides at multiple places.

Officials said Muneeb Ahmad, a 21-year-old truck driver from south Kashmir, was killed on the spot after his vehicle was crushed by massive boulders at Magarkot.

Gopal and Rajinder Kumar Son from Batote in Ramban, who were in an oil tanker, were injured.

“But we had to halt the Yatra at Ramban after reports of shooting stones. Some of us, including Rajani Patil ji and myself, marched ahead to see the condition. We were waiting for four hours on a road ahead of Panthyal, which had witnessed shooting stones,” Sharma told The Telegraph.

“Rahul ji left for Jammu to fly to Delhi (for Republic Day). Other Yatris are safe and are camping at several places. Rahul ji will return and resume the Yatra on January 27.”

The Yatra was scheduled to enter the Valley on January 27 through Qazigund in south Kashmir but the journey will now depend on the weather.

Heavy snowfall has been reported from Banihal. The Congress said Thursday would be a rest day for the Yatris.

In the evening, Jammu and Kashmir traffic department said the highway was still closed because of shooting stones and mudslides between Chanderkot and Banihal.

The Yatra is expected to reach Srinagar in the next three days before a mega rally on January 30.