India experienced a bone chilling cold wave in the past week as minimum temperatures plummeted to sub-zero in multiple stations in the northern parts.

It was the passage of a western disturbance that triggered the flow of icy north west winds in the plains of North India which lead to a phenomenal drop in Temperatures.

Sub-zero temperatures are very common at the hill stations, even plains do witness time to time but not on a scale like this time, majority of the stations in Punjab, Haryana, Rajasthan and Delhi NCR temperature dropped below 2 per cent, many of them recorded near the freezing point and dipped to as low as -4.5°c in Fatehpur Sikar on 17 January.

The below freezing temperatures adversely affected the standing mustard crops in the states as widespread ground frost led to 50-70 per cent damage in some parts of Haryana and Rajasthan, claims local farmers. A day later on 18 January another automatic weather station of the Indian Meteorological Department recorded -0.2°c in Gurgaon, Haryana.

Evidently Along with Punjab, Haryana and Rajasthan parts of the national capital region experienced bone chilling mornings in the beginning of the past week.

Not just the northern parts of the country but also central, west, southern and eastern shores saw a dip in temperatures amid cold winds from the Himalayas and multiple stations in various cities dipped to the season’s lowest.

Meanwhile here are the minimum temperatures from Ladakh – the coldest region of the country on 18 January: What led to the exit of the chilling coldwave?

The cold wave conditions continue to impact India until 18 January, a weak western disturbance appeared over western Himalayas and plains of North India during 19 January lead to break in flow of the cold northerly winds, additionally cloudy weather lead to a steep rise in minimum temperature across the northern plains and the deadly coldwave abated completely.

The winter precipitation in the country so far has been fairly below normal in absence of the typical active western disturbance that generally influence the region around this time:

During the first three weeks of January, India as a whole received a total of 4.6 mm rainfall against the climatological normal of 10.6 mm, the departure from normal stands at -56 per cent.

Subdivision wise seasonal rainfall in the period of 1st till 21 January, 2023:

• Southern Peninsula: Actual 0.5mm against the average of 6.3mm, -92% departure from normal. 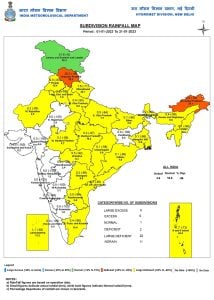 Below normal seasonal winter rains in India since 1st January, 2023

• The Western Disturbance as a cyclonic circulation over Afghanistan and neighbourhood between 3.1 km and 7.6 km above mean sea level persists.

• The induced cyclonic circulation over southwest Rajasthan and neighbourhood persists and extends up to 1.5 km above mean sea level.

• The other Western Disturbance as a cyclonic circulation over Jammu Division and neighbourhood at 3.1 km above mean sea level has moved away east-northeast awards.

The dry weather in this winter season has stretched too long but it is all set to end as two back to back active western disturbances impact most parts of North India in the upcoming week.

A western disturbance along with the formation of cyclonic circulation over South West Rajasthan will drag a lot of moisture from the Arabian sea and an ridge(anti-cyclonic circulation) over West Bengal will be an additional source of moisture from bay of Bengal, the synoptic features are all set to create a moisture convergence zone over plains of North India during 23rd to 30th January.
Western Disturbance is an upper air weather system while the moisture is being dragged from both the sea’s are on lower levels, combination of such weather systems results in moderate to heavy rains along with possibility of hail storms.

In the period of 23rd January till 30th January, fairly widespread rainfall is expected in Punjab, Haryana, Delhi NCR, Uttar Pradesh and Rajasthan, at the same time widespread moderate to heavy snowfall expected in Ladakh, Kashmir, Uttarakhand and Himachal Pradesh.

The prolonged spell of snowfall might affect the tourism activities over the himalayan states as roadblocks are very common due to heavy snowfall, whereas crop damage looms large over plains as the possibility of hailstorm is high.

Expected rainfall accumulation in the states of North India till 28 January: The feeling of cold weather is slowing escaping from central parts of the country as temperature’s have seen rising this weekend, In the upcoming week under the influence of the western disturbance over northern India, wind instability is all set to develop in interiors of Madhya Pradesh, Maharashtra and Chhattisgarh, under such circumstances moderate rains and thunderstorms pop-up over the region.

Scattered light to moderate rains along with isolated hail storms may occur in Maharashtra, Madhya Pradesh and Chhattisgarh during 24-26th January, minimum and maximum temperatures are expected to stay above normal in the region including Gujarat in the upcoming week.

Expected rainfall in the region till 28th January:

An anticyclonic circulation or a ridge is present over West Bengal and adjoining Jharkhand region, due the weather system abnormally warm weather is expected in most parts of Bihar, Jharkhand, Odisha, West Bengal and states of North East India, minimum and maximum temperatures can be 3 to 7°c above normal with least possibility of rainfall as ridge continue to dominate the region.

” Warm and slightly wet as it gets”

The weather conditions have been fairly dry across most parts of the southern peninsula in the past week with a wintery feel as multiple cities experienced the coldest morning of the season.

Now as the western disturbance blocks the flow of northern winds in the Deccan it will start warming up in the upcoming week as temperature’s set to rise gradually.

A wind instability will develop on the lower levels around Kerala which can bring in light to moderate rains over Kerala, Western Karnataka and Southern Tamil Nadu during 24-26th January, while parts of Goa, Andhra Pradesh, Telangana to remain largely dry during the upcoming week with pleasant temperatures.

Expected rainfall in the region till 28th January: