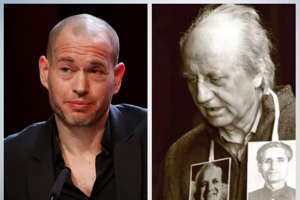 © Provided by News18 Outrage After Israeli Filmmaker Nadav Lapid’s Remarks on ‘The Kashmir Files’, Police Complaint Filed | What All Has Happened


The remarks made on the Hindi film ‘The Kashmir Files’ at the 53rd International Film Festival of India (IFFI) by Israeli filmmaker Nadav Lapid, who was also the jury head of the event, seems to have sparked massive outrage with Israel’s ambassador to India, Naor Gilon, issuing an open letter over the matter, many other political reactions also coming in, and now police complaint also filed against the filmmaker.

Israeli filmmaker Nadav Lapid, the jury head of the 53rd IFFI, on Monday described ‘The Kashmir Files’ as “propaganda” and “vulgar”. The film, that is based on Kashmiri Hindu genocide was released in theatres on March 11, was part of the Indian Panorama Section at IFFI and was screened on November 22. A Supreme Court lawyer has now filed a police complaint in Goa against Lapid over his remarks.

“I feel comfortable to openly share this feeling with you since the spirit of the festival can truly accept critical discussion which is essential for art and life”, Lapid added.

After actors of the film Anupam Kher, Darshan Kumar reacted to Nadav Lapid’s ‘propaganda’ comment, Israeli ambassador to India Naor Gilon issued an open letter in which he told Nadav Lapid that he “SHOULD BE ASHAMED”.

Here’s What the Israeli Envoy Said:

Taking to Twitter, Naor Gilon wrote: An open letter to #NadavLapid following his criticism of #KashmirFiles. It’s not in Hebrew because I wanted our Indian brothers and sisters to be able to understand. It is also relatively long so I’ll give you the bottom line first. YOU SHOULD BE ASHAMED. Here’s why:

1. In Indian culture they say that a guest is like God. You have abused in the worst way the Indian invitation to chair the panel of judges at @IFFIGoa as well as the trust, respect and warm hospitality they have bestowed on you.

2. Our Indian friends brought @lioraz and @issacharoff from @FaudaOfficial in order to celebrate the love in #India towards #Fauda and #Israel. I suspect that this is maybe also one of the reasons they invited you as an Israeli and me as the ambassador of Israel.

I understand your need in retrospect to “justify” your behavior but I can’t understand why you told @ynetnews afterwards that the minister and I said on stage that there is similarity between our countries because “we fight a similar enemy and reside in a bad neighborhood”.

We did speak about the similarities and closeness between our countries. The minister spoke about his visits to Israel, it being a Hi-Tech nation and the potential of combining this with the film industry. I spoke about the fact that we grew up watching Indian films.

I also said that we should be humble when India, with such a great film culture, is consuming Israeli content (Fauda and more).

3. I’m no film expert but I do know that it’s insensitive and presumptuous to speak about historic events before deeply studying them and which are an open wound in India because many of the involved are still around and still paying a price.

4. As a son of a holocaust survivor, I was extremely hurt to see reactions in India to you that are doubting Schindler’s List, the Holocaust and worse. I unequivocally condemn such statements. There is no justification. It does show the sensitivity of the Kashmir issue here.

5. From your interview to Ynet the connection you make between your criticism of #KashmirFiles and your dislike to what is happening in Israeli politics was quite evident.

My suggestion. As you vocally did in the past, feel free to use the liberty to sound your criticism of what you dislike in Israel but no need to reflect your frustration on other countries. I’m not sure that you have enough factual basis to make such comparisons. I know I don’t.

6. You will go back to Israel thinking that you are bold and “made a statement”. We, the representatives of Israel, would stay here. You should see our DM boxes following your “bravery” and what implications it may have on the team under my responsibility.

Israel’s Consul General to Mumbai Kobbi Shoshani also opposed Lapid’s comments and said, “I saw the Kashmir file and met the cast. I have a different opinion than Nadav Lapid. After his speech, I told Nadav my opinion. @vivekagnihotri”.

What Actors of The Kashmir Files Said:

Actor Anupam Kher called Lapid’s comments on The Kashmir Files “pre-planned” and hinted that the “toolkit gang” may have something to do with it.

“Its a pre planned i think , toolkit gang is also active now . Its shameful for him to make a statement like this . Jews have suffered hollocast and he comes from that community , it had pained those people who faced it,” Anupam Kher said.

Anupam Kher, who played a pivotal role in the film, also shared his thoughts on Twitter. He wrote, “No matter how high the height of the lie is..It is always small in comparison to the truth.”

Darshan Kumar, who was upset with the remarks said that the film is not on vulgarity but it is on reality. The Vivek Agnihotri directorial is based on the 1990s exodus of the Kashmiri Pandits and the events that led to it. Darshan said, “Everyone has their own individual opinions on anything they see and perceive. But one can’t deny the fact is that The Kashmir files is a film which has depicted the actual plight of Kashmiri pandit community, who are still fighting for justice against the brutal acts of terrorism.”

The Kashmir Files director Vivek Agnihotri shared a note on Twitter amid the row over Lapid’s statement and said, “GM. Truth is the most dangerous thing. It can make people lie. #CreativeConsciousness.”

Bharatiya Janata Party (BJP) also reacted to the comments by Nadav Lapid and said that just like people denied the Holocaust and called Schindler’s List a propaganda, some people are doing the same to Kashmir Files.

Israel’s Ambassador responds to compatriot filmmaker Nadav Lapid’s criticism of Kashmir Files. For the longest time, people even denied the Holocaust and called Schindler’s List a propaganda, just like some are doing to Kashmir Files.

Prominent Kashmiri pandit leader and leader of Panun Kashmir organization, Dr Agnishekhar, condemned Nadav Lapid for “insulting the whole Kashmiri Pandit community”. He said that The Kashmir Files showed the actual happenings which happened in Kashmir during 1990’s AND termed the comments “adequate as part of conspiracy to defame KP community”.

Congress party, which had criticised the film at the time of its launch as well, had the same stand on it now as well with its senior leaders still saying that the film was a “propaganda.

Senior Congress leader Ravinder Sharma said that “the way government promoted The Kashmir Files and launched a campaign itself showed propaganda”, adding that the statement of Nadiv Lapid is an “embarrassment for the government”.

Hate gets called out, eventually pic.twitter.com/VJ5dFRKnaT

When the The Kashmir Files was a talk of the town at the time of its launch and had divided opinions, director Vivek Agnihotri had likened making the film in the current climate to making Schindler’s List at the peak of Nazism in the 1940s.

Former Israeli Ambassador to India and Sri Lanka Daniel Carmon also joined the voices slamming Lapid over his comments and said the filmmaker “definitely should apologize for his revolting personal remarks on historical facts without any sensitivity, not really knowing what he was talking about”.

I strongly urge our many friends in India not to be drawn by one person’s remarks to doubting the facts about the Holocaust, Carmon added. Carmon called Lapid’s comment “unfortunate which reflects his own and only his own views and total lack of basic sensitivity or knowledge of what he talked about”.

An unfortunate comment which reflects his own and only his own views and total lack of basic sensitivity or knowledge of what he talked about. https://t.co/zRY7t6a1bk

He termed Israeli envoy Gilon’s open letter “excellent”, saying it “speaks for all of us & reflects our true feelings. As the Ambassador said-the friendship between the people & the states of India & Israel is very strong and will survive the damage the film maker has inflicted”.Monica Verma, a PhD in International Relations from the Department of International Relations, South Asian University, said Nadav Lapid is a leftist film-maker whose films border on criticising the armed forces and Israeli national identity.

Nadav Lapid is a leftist film-maker whose films border on criticising the armed forces and Israeli national identity.

When will we learn to invite people after vetting which side do they fall on? Using political power to set narrative is too complex an art?

“When will we learn to invite people after vetting which side do they fall on? Using political power to set narrative is too complex an art?” she said.

Shiv Sena MPs Priyanka Chaturvedi and Sanjay Raut joined the opposing voices in this row, with the former tweeting ‘it is obvious… that Lapid at no point denied the Kashmiri Pandit exodus or dismissed it’. She said the filmmaker’s comment “were only about the ‘way the film treated the subject’ and ‘made it a propaganda’ production. Raut claimed the movie ‘was propaganda by one party…”