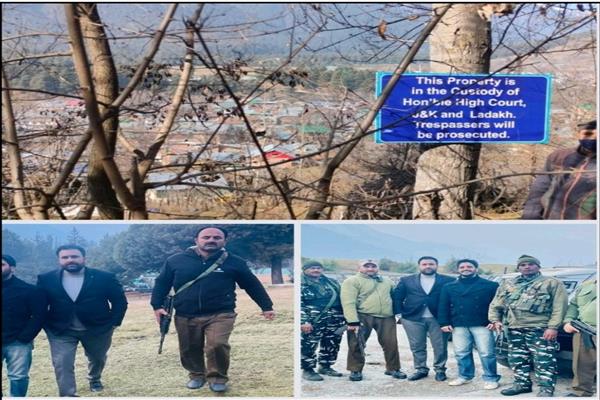 Srinagar, Nov 27: An Official Liquidator has taken possession of a property in south Kashmir’s Pahalgam area, in a case pertaining to a private limited company in which the High Court has ordered the liquidation back in 2001 and 2003.

Haamid Bukhari, an Official Liquidator attached to High Court of J&K and Ladakh, who is appointed as Provisional Liquidator in this case recently at Srinagar bench of High Court, took the physical possession of the property of the company located near hutment areas at Pahalgam.

In this case, Haamid Bukhari was assisted and accompanied by the administrator appointed by the court who is a retired district judge. These officers are vested with the powers by High Court and the orders passed by them are binding on all the official authorities.

Official Liquidator received active support of the District Magistrate Anantnag who had passed directions to the subordinate Civil & Police authorities in Pahalgam to ensure complete cooperation during the process of takeover of the possession of the property. Tehsildar Pahalgam was present on the spot along with his revenue team under the direct supervision of SDM Pahalgam during this takeover process.

“This is one of the significant cases of Company Liquidation in which the significant progress was made in the last one year soon after the effective operationalisation of Srinagar Office of Registrar of Companies & Official Liquidator,” an official said in a statement.

“The offices of Official Liquidators are attached to High Courts in all the states and UTs and they function as quasi judicial bodies dealing with liquidation matters under Companies Law, 1956 & 2013. There are more than 11 cases pending as on date in which High Court benches both at Jammu and Srinagar has ordered compulsory liquidation of the companies and it is being learnt that many of these cases are 10 to 15 years old in which no significant progress has been achieved. However there is no Voluntary liquidation matter pending with any of the offices of liquidator, each one located in the capital cities of Jammu and Srinagar attached to respective permanent benches of High Court of J&K and Ladakh,” he said.

Soon after legal formalities of the liquidation matter is done followed by entries in the revenue records, the property as per the set liquidation process shall be put to auction with the permission of the High Court and accordingly all the creditors will be given their monies whatever is due after proper verification of the documents.