The exercise between the two armies, which will continue till 11 December, will be a yearly event that will occur in India and Australia alternatively.

“Bilateral training exercise ‘AUSTRA HIND 22’ between contingents of the Indian Army and the Australian Army is scheduled to take place at Mahajan Field Firing Ranges (Rajasthan) from 28 November to 11 December, 2022. This is the first exercise in the series of AUSTRA HIND with participation of all arms and services contingent from both armies,” the ministry had said in a statement on Sunday.

Let’s take a closer look at this exercise and why it is a warning to China:

What do we know about the exercise?

The Australian Army contingent comprises soldiers from the 13th Brigade of the 2nd Division, while the Indian Army is being represented by troops from the Dogra Regiment.

The aim of the exercise is to build positive military relations, imbibe each other’s best practices and promote the ability to operate together while undertaking multi-domain operations in semi-desert terrain under a UN peace enforcement mandate.

This joint exercise will enable the two armies to share best practices in tactics, techniques and procedures for conducting tactical operations at company and platoon level for neutralising hostile threats.

During the exercise, participants will engage in a variety of tasks ranging from joint planning, joint tactical drills, sharing basics of special arms skills and raiding a hostile target.

The joint exercise, besides promoting understanding and interoperability between the two armies, will further help in strengthening ties between India and Australia, the ministry further said.

Why is this a warning to China?

The exercise comes amid India’s lingering border stand-off with China in Ladakh and tensions on the rise between Beijing and Canberra.

New Delhi is conducting a series of military drills with friendly nations including members of the QUAD –  the grouping seen as a counter-balance to the rise of Beijing in the Indo-Pacific.

The Australian Navy was part of the Malabar naval exercise hosted by India in November 2020 as well as last year.

As per Eurasian Times, Admiral Hari Kumar speaking during the Naval Commanders’ conference said India’s credibility at home, in the region and across the world was underscored after the maiden concurrent deployment of Indian Navy ships across six continents on 15 August.

In the last six months, operational deployments have also emphasised India’s credibility, with a footprint covering all major oceans of the world, he added.

“All this is said to be India’s signal that it will challenge China’s hegemonistic activities in the Indo-Pacific and the IOR in particular. And in this, India is not alone. India has solid support from Australia, Japan, and the United States in maintaining a rules-based order in the Indo-Pacific,” the Eurasian Times article concluded. 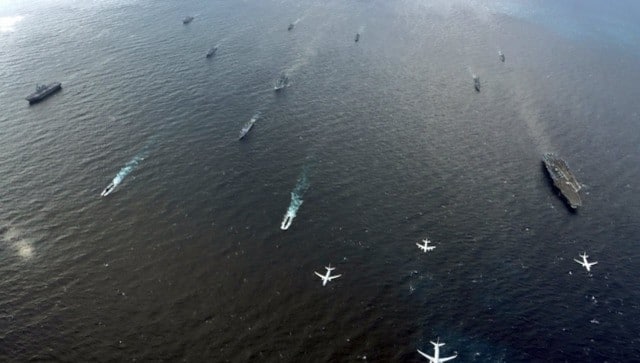 India is also slated to conduct a battalion-level exercise with the US Army in Uttarakhand’s Auli – only 100 kilometres from the line of actual control (LAC) – allowing the Indian army to rehearse for high-altitude combat.

Joint exercises with three members of the Association of South East Asian Nations (ASEAN) are also in the offing, as per Outlook.

Meanwhile, Australia is locked in a spat with its largest trading partner China in the wake of the COVID-19 pandemic – with no indication that things are set to ease – even as it deepens ties with India.

Australia in September held exercise ‘Pitch Black’ – a mega air combat exercise that witnesses the participation of around 100 aircraft and 2,500 military personnel from 17 countries including India.

Defence and security ties between India and Australia have been on an upswing in the last few years.

In June 2020, the two countries elevated their ties to a comprehensive strategic partnership and signed a landmark deal for reciprocal access to military bases for logistics support.

The Mutual Logistics Support Agreement (MLSA) allows the militaries of the two countries to use each other’s bases for repair and replenishment of supplies, besides facilitating scaling up of overall defence cooperation.

Another example of the stark contrast between Australia’s outlook towards India and China came at the G20 in Bali.

As per the Sydney Morning Herald, when Anthony Albanese met Xi Jinping the handshake was merely ‘polite’ and the language ‘cautious’.

While Albanese said that meeting, the first between an Australian prime minister and the Chinese president for six years, was an “important step towards the stabilisation of the Australia-China relationship”, it stood in stark contrast to his meet with Prime Minister Narendra Modi where the body language was described as ‘effusive’.

“So wonderful to see my friend @narendramodi and to celebrate the rich connections between our two countries and our people,” Albanese later tweeted. Lisa Singh, chief executive of the Australia India Institute, which promotes research and understanding about the two nations, told the newspaper 2022 has been a “watershed moment” in India-Australia ties.

“This has been the most impactful year for the relationship that I’ve seen,” she said.

While India’s goods exports to Australia stood at $8.3 billion and imports from the country aggregated to $16.75 billion in 2021-22, that figure is expected to witness a massive increase after the Australian Parliament in November approved the India-Australia Economic Cooperation and Trade Agreement (ECTA).

The agreement, signed in April, paved the way for the rollout of the pact on a mutually agreed date—a move which would help in almost doubling the two-way commerce to $45-50 billion in about five years.

The pact is expected to come into force from January 2023.

Meanwhile, as per The Print, Indian officials hope ECTA will give rise to a larger pact — the Comprehensive Economic Cooperation Agreement (CECA).

Top official sources told The Print New Delhi is hopeful it will now be able to tap into Australia’s vast and rich mineral resources enabling it to reduce dependence on China.

Sources also said India will be able to now import coking coal and uranium from Australia for zero duty even as New Delhi will seek to enhance services trade between both the “complimentary economies”.

ECTA, which was signed on 2 April, would provide duty-free access to Indian exporters of over 6,000 broad sectors including textiles, leather, furniture, jewellery and machinery in the Australian market.

Commerce and Industry Minister Piyush Goyal said the agreement is likely to push the bilateral trade to USD 45-50 billion in the next five-six years from the present $31 billion.

“Australia will open 100 per cent of their lines (products) with no restriction on even quota. This is the first time Australia has done for any country…We see job opportunities when Australian investment comes here,” Goyal told reporters.

Soon after getting approval from the Executive Council of Australia and assent from the Indian President, both the countries will fix a date and implement the pact.

Though the minister did not commit to any date, official sources said the agreement could be implemented from 1 January next year.

“BREAKING: Our Free Trade Agreement with India has passed through parliament,” Australian Prime Minister Anthony Albanese said in a tweet.

Replying to the tweet, Prime Minister Narendra Modi tweeted, “Thank you PM @AlboMP! The entry into force of IndAus ECTA will be greatly welcomed by our business communities, and will further strengthen the India-Australia Comprehensive Strategic Partnership.”

Goyal said there will be harmonisation of codes and customs regime on both sides so that “we can enter into force at an early date”.

The deal is fair and good for India, he added. 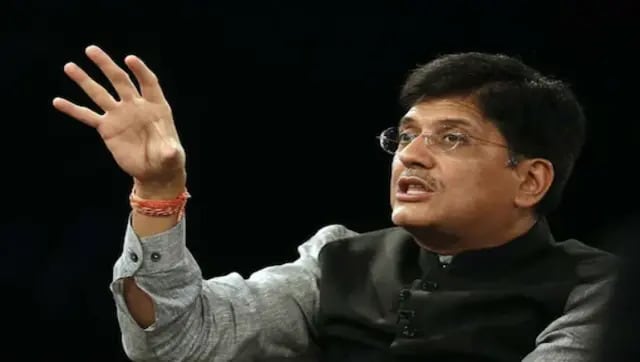 Australian trade minister said in a statement that the ECTA will enter into force 30 days (or another mutually agreed time) after the respective parties have confirmed in writing that they have completed their domestic requirements.

“The Albanese government has worked hard to expeditiously advance all processes necessary” to ensure that Australia is in a position to implement the free trade agreements before the end of 2022, the statement said.

Australia’s Minister for Trade and Tourism Don Farrell said they will work closely with the Indian government to implement the trade agreement “as soon as possible”.

Under the pact, Australia is offering zero-duty access to India for about 96.4 per cent of exports (by value) from day one. This covers many products that currently attract 4-5 per cent customs duty in Australia.

The Australian Parliament has also approved an amendment to the the Double Taxation Avoidance Agreement (DTAA), a move which would help the Indian IT sector in operating in that market.

It would stop the taxation on the offshore income of Indian firms providing technical support in Australia.

Goyal said Indian IT sector is the “biggest gainer” of that amendment.

“If the tax will go, they can see a quantum jump in their business with Australia,” he added.

The move, as per estimates, may lead to savings of about USD 200 million each year for over 100 Indian IT firms operating in Australia.

About beginning of talks for expanding the scope of the India-Australia Economic Cooperation and Trade Agreement, Additional Director General of Foreign Trade (DGFT) Tapan Mazumder said it may start from January next year.

Issues which can figure in that meeting include government procurement and digital trade.

Goyal also said for the “first time”, India has got visas for Indian chefs and yoga instructors and also got a commitment that every child going to study in Australia will get an opportunity to work there depending on the level of education.

This is the first agreement with a developed country after a decade, he added.

He also said the pact will help farmers growing grapes for making wine to explore more business opportunities in Australia.

“Today there are 6,000 grape farmers (in India) who grow grapes for wine purpose…wine industry has welcomed it wholeheartedly. It will help attract investments, new farmers can also come in the sector,” he added.

Commenting on the move, Federation of Indian Export Organisations (FIEO) Director General Ajay Sahai said the agreement has opened vistas of opportunities for domestic exports as over 98 per cent of the tariff lines will have tariff advantage from day one.

“We will also get duty-free imports of critical raw material like coal, alumina, manganese, copper, nickel, wool, hides and skin. It will impart further competitiveness to our manufacturing and exports,” Sahai added.

“The FTA is a win-win for both. On one hand it would open up the Indian market for quality Australian wines, and on the other it would help Indian wine industry evolve further benefiting from the expertise and investment from their Australian counterparts,” Giri said.

With inputs from agencies