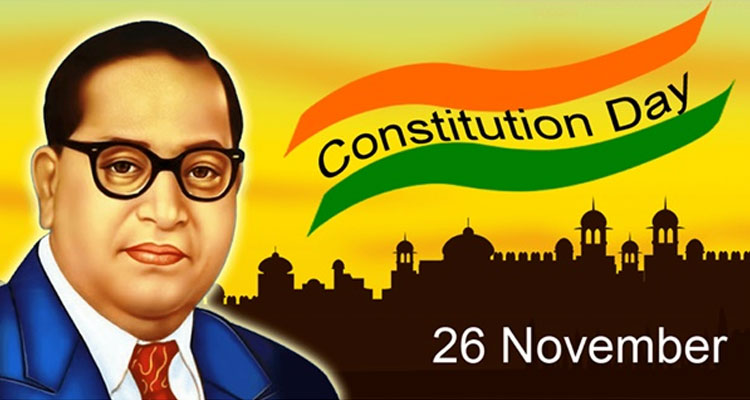 Chief Secretary, Dr Arun Kumar Mehta, while reading the preamble of the Constitution at Spiritual Growth Center, Katra highlighted the significance of observing Samvidhan Diwas. He elaborated that the day is being celebrated to commemorate adoption of the Constitution of India and to honour and acknowledge the contribution of founding fathers of the Constitution.

“Our Constitution has played a key role towards empowerment of downtrodden and needy people in the last row,” he said and highlighted that this document guarantees Justice, Equality and Liberty besides promoting Fraternity among citizens.

Preamble of our Constitution is like the lighthouse for the journey of Modern Democratic India, said the Divisional Commissioner (Div Com) Kashmir, Pandurang K Pole during ‘Constitution Day’ celebration function. All the Officers and Officials of Div Com Office participated in reading the preamble of the constitution which provides an overview of democratic, republic and secular structure of the country.

Speaking on the occasion, the Div Com highlighted the importance of constitution, its fundamentals and the preamble. He gave a historical background of formation of Constituent Assembly of India, adoption of constitution besides he also spoke about the basic structure of constitution.

The training programme was inaugurated by Justice Sindhu Sharma, Chairperson, Governing Committee for Judicial Academy in the presence of Justice Rahul Bharti, Judge, High Court of J&K and Ladakh who was also the resource person for the workshop.

In the inaugural session, Justice Rahul Bharti, in his special remarks described the judicial officers as being the mainstay of the entire judicial system and emphasised the important role of district judiciary as torch bearers of the administration of justice system. He also called upon the judicial officers to discharge their duties with utmost sincerity and commitment.

Justice Sindhu Sharma emphasised the qualities of compassion, performance of duty and impartiality as being the hallmark of judicial conduct which must be of impeccable character. She exhorted the judicial officers to ensure that the cause of justice should not suffer.

Shahzad Azeem, Director, J&K Judicial Academy presented the welcome address and gave an overview of the programme. He said that the judges being at the pivot of the temple of justice must exhibit the highest standards of personal and professional conduct and must inspire the trust and confidence of people through his ability and efficacy. On the occasion, the Preamble reading ceremony was also held.

The 73rd Constitution Day (Samvidhan Divas) was celebrated by Jammu & Kashmir Police across the UT with great passion and patriotic fervor. The main function was organized in the premises of Police Headquarters J&K here. Additional Director General of Police (Hqrs) PHQ, M K Sinha presided over the function and read out the Preamble of the Constitution of India to officers and jawans.

ADGP Coordination PHQ, Danesh Rana, IGP Headquarters PHQ, B S Tuti, DIG Administration PHQ, Sara Rizvi, AIsG of PHQ, SO to ADGP Armed Mehmood Ahmad, senior officers of  Telecommunication & Prosecutions, Gazetted and Staff members of PHQ, APHQ and Telecom J&K attended the function. On the occasion, ADGP Headquarter, PHQ read out the Preamble of the Constitution which was followed by the officers and jawans.

Meanwhile, the J&K Police celebrated the day at all wings, units and district headquarters across the UT where the concerned police heads read out the Preamble of the Constitution to the officers and jawans.

SO to ADGP, Railways Umesh Kumar and other staff members of headquarters attended the function. Similar functions were organised at all other Railway Police establishments of Jammu and Kashmir with full fervor and enthusiasm.

All the necessary arrangements for Preamble Reading Sessions were made in advance at Zonal and District level subordinate offices of the Department as well.

Director of the Department of Youth Services and Sports J&K while congratulating all the ranks of the department for celebrating the day with zeal and enthusiasm said, “It is indeed a great honour and moment of pride for every citizen of the nation to celebrate the day while remembering the great minds behind the construction of our great Constitution.”

Central University of Kashmir (CUK) under the aegis of Directorate of Students Welfare (DSW), Saturday commemorated the Constitution day or “Samvidhan Divas,” which was attended by all the teaching and administrative staff of the varsity.

Registrar, Prof M Afzal Zargar read the preamble and administered its oath among the participants. In his address, he discussed various contours of the Constitution ranging from different amendments to directive principles, laws and its basic framework. He impressed upon all to read the Constitution threadbare for better understanding of fundamental rights and duties.”

Asstt Prof Deptt of Politics and Governance, Dr Khalid Waseem gave a detailed presentation on the theme during the event.

On the occasion, many activities were organised that include Recitation of Preamble by members, quiz programs on the Indian Constitution and addresses by Prof Naseer Iqbal, Dr Anisa Jan and Dr Akhter Hussain Khan, IUST faculty and members from IUST Student Council.

Prof Naseer Iqbal encouraged the students and faculty members to read the Constitution and be knowledgeable citizens. “Every right comes with a responsibility and we need to understand our responsibilities also along with the understanding of the rights,” he said.

Dr Anisa Jan, Dean of Students said that universities being the highest seat of learning have a responsibility to sensitise the citizens of country regarding their rights as well as their duties as prescribed by the constitution and this day holds special significance in this direction.

Chief Secretary, Dr Arun Kumar Mehta, Divisional Commissioner, Jammu, Chief Executive Officer, SMVDSB along with senior officers of SMVDSB and District Administration, and officers and officials Shrine Board and JKUT on Saturday read out ‘Preamble’ of the constitution of India at Spiritual Growth Centre, Katra to mark the anniversary of the adoption of the Constitution of India on 26th November, 1949.

Mayor, Jammu Municipal Corporation, Rajinder Sharma led the Constitution Day Celebrations held here in the Conference Hall of JMC. Conveying his greetings of the Constitution Day, Mayor, Rajinder Sharma recalled that in 1949, on this day, Independent India laid the foundation for its future. The celebrations were attended by Commissioner, JMC, Rahul Yadav and all Officers of JMC.

The Mayor exhorted upon all to discharge their duties as envisaged in the Constitution with due diligence in the larger interest of Nation and the Society. He spoke about the social justice aspect emphasizing the equality of justice for one and all and impressed that the social justice to the economically backward and weaker section shall bring them at par with the affluent class and dealt at length on the constitutional provisions for ensuring social justice.

The Mayor paid rich tributes to Dr B R Ambedkar for his peerless contribution in the making of our Constitution, which has guided the destiny of India to become a great democracy. Touching upon the basic contours of the Constitution, the Mayor highlighted that this document guarantees justice, equality and liberty besides providing fraternity among citizens. On this occasion, the Mayor and all participants also read out the preamble to the Constitution.

BSF School Jammu celebrated Constitution Day with great zeal and enthusiasm. To mark the occasion, a variety of events encompassing informative lectures, poems, patriotic songs etc concerning the Constitution of India were organized. The students spoke at length about the various constitutional provisions with special mention of those which provide equality, justice and brotherhood. They also highlighted the importance of Constitution, its inception and adoption. The oath of the Constitution was also administered to the students.

Principal BSF School Jammu Dr S K Shukla threw light on the significance of celebrating Constitution Day and asked students to acquaint themselves with the fundamental rights and duties and give respect to the Constitution of India.