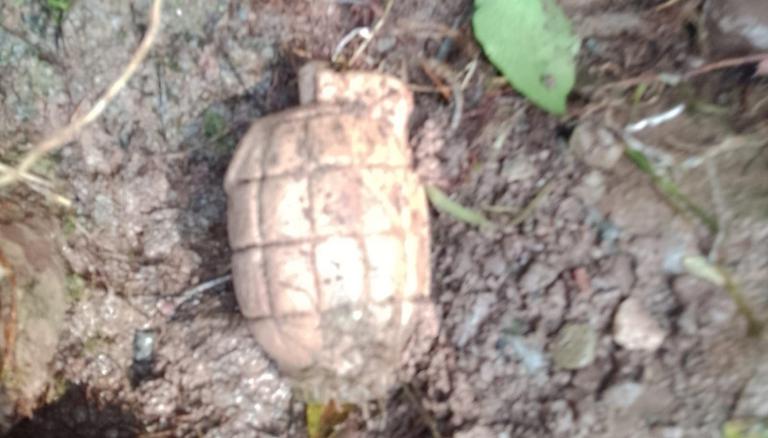 A live hand-grenade was found at Kallar Kattal village in Surankote block Jammu and Kashmir’s Poonch district, officials said on Saturday. The explosive weapon was found lying on the ground, they said.

According to sources, the live hand grenade was found by the locals who immediately alerted the police.

Special Operations Group (SOG) of Surankote police station was rushed to the spot. The grenade has been diffused by police to avert a tragedy.

Recently, locals had reported suspicious movement of unidentified people in the forests of Surankote in Poonch district and Budhal in Rajouri district following which a joint search operation by the Army and CRPF was launched.

Village defence group guard Subash Chander opened fire in the air on Tuesday night after some unidentified persons pelted stones on his house in the Budhal area, they said. In the stone pelting, Chander suffered minor head injuries. He also claimed that he was also fired upon by the attackers.

With the arrest of two Jammu and Kashmir Ghaznavi Force (JKGF) operatives, police on Saturday said that they have solved a blast case outside a police post in Rambhan within 72 hours.

In the attack, two police personnel had suffered minor wounds when unidentified terrorists hurled an explosive device on a police post at Ind village on August 2.

Those arrested have been identified as Mohd Farooq and Shah Din Padyar. According to police, more arrests are possible after the identification of a terror financer in the case.

“A case under various sections of Indian Penal Code and Explosives Act was registered in Police Station Gool and the investigation was taken up. Soon after the incident, security forces including police, Army and CRPF launched a massive joint operation in Ind and adjoining areas of Gool to apprehend the person responsible for the attack,” Senior Superintendent of Police, Ramban, Mohita Sharma said. Subsequently, the two terrorists were arrested.

JKGF, a Pakistan-sponsored terrorist outfit, came to light last year and is making repeated attempts to revitalise militancy in the Jammu region.