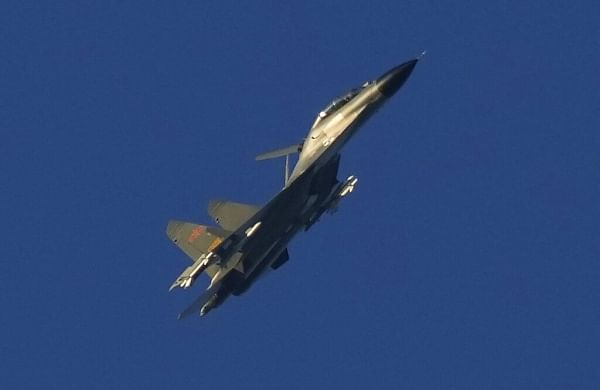 NEW DELHI: Amidst the rising tensions between China and other countries, the military officers of India and China met on Tuesday to discuss issues of rising air force activities and the recent air space violation by the China fighter. Confirming the meeting as the source said,

“Talks were held in Chushul-Moldo meeting point on Tuesday which included a Major General of the Army and an Air Commodore of the Indian Air Force from India. The meeting, along with other things, also discussed the recent reported air space violation conducted by the Chinese PLA Air Force J-11 fighter.”

The fighter was said to have crossed the set limit for aircraft of the forces from both sides.

The combat, transport and fixed-wing aircraft cannot get closer than 10 kilometers from the Line of Actual Control.

The IAF Chief Air Chief Marshal VR Chaudhari said recently that the activities of the aircraft of China are closely monitored and as soon as they are seen getting close to the LAC appropriate measures are taken either by scrambling Indian aircraft for putting them on alert.

The Indian team, comprising an Air Commodore and a number of senior Army officials, highlighted the need for focusing on confidence-building measures to avoid any untoward incident, the sources said.

The special round of talks took place over a month after the instances of Chinese combat aircraft flying close to the LAC in eastern Ladakh that had prompted the Indian Air Force(IAF) to scramble its jets.

“The Indian team highlighted the need for having confidence-building measures and to have a better understanding between the two sides,” said a source, adding it was conveyed that both sides should not fly within 10 km of the buffer zone from the LAC.

A Chinese J-11 fighter jet flew close to the LAC in eastern Ladakh in the last week of June following which the IAF also initiated counter-measures.

There were reports of similar incidents earlier as well.

The sources said both sides held meetings like the one on August 2 including between ground commanders after the face-off in eastern Ladakh erupted in May 2020.

They said it was for the first time in the recent past that an IAF officer joined the talks.

Indian and Chinese troops are engaged in a standoff at a number of friction points in eastern Ladakh for over two years.

The two sides carried out a disengagement process in several areas in the region as a result of high-level military talks.

However, both sides are yet to make any breakthrough in ending the face-off in the remaining friction points.

The last round of Corps Commander-level talks took place last month but it failed to achieve any concrete outcome.

The 16th round of military talks was held 10 days after External Affairs Minister S Jaishankar met his Chinese counterpart Wang Yi in Bali.

At the one-hour meeting on the sidelines of a conclave of foreign ministers of the G20 nations, Jaishankar conveyed to Wang the need for an early resolution of all the outstanding issues in eastern Ladakh.

The eastern Ladakh border standoff erupted on May 5, 2020, following a violent clash in the Pangong lake areas.

Both sides gradually enhanced their deployment by rushing in tens of thousands of soldiers as well as heavy weaponry.

As a result of a series of military and diplomatic talks, the two sides had completed the disengagement process last year on the north and south banks of the Pangong lake and in the Gogra area.

Tensions have flared up between China and the US since the visit of the US Speaker of the House of Representative, Nacy Pelosi, to Taiwan last week.

Meanwhile, China’s Special Envoy for Afghanistan Yue Xiaoyong paid a quiet visit to India this week during which he held talks with a senior Indian official on ways to ensure peace and stability in the war-torn country.

It was Yue’s first trip to India which came over four months after Chinese Foreign Minister Wang Yi visited Delhi.

On Twitter, the envoy described his visit as “good” and said both sides agreed to “encourage engagement, enhance dialogue and give positive energy for Afghan peace and stability”.

The talks were learnt to have taken place on Thursday.

There is no official word from the ministry of external affairs on Yue’s visit.

The people cited above said the visit by the Chinese envoy reflected China’s acknowledgement of India’s important role in Afghanistan.

They, however, said the talks should not be seen as the resumption of all kinds of engagement by India with China without complete resolution of the eastern Ladakh border standoff.

India has been consistently maintaining that peace and tranquillity along the Line of Actual Control (LAC) were key for the overall development of bilateral ties.

India has been in touch with several leading powers on the situation in Afghanistan.

In June, India re-established its diplomatic presence in Kabul by deploying a “technical team” in its embassy in the Afghan capital.

India had withdrawn its officials from the embassy after the Taliban seized power last August following concerns over their security.

The reopening of the embassy came weeks after an Indian team led by Singh visited Kabul and met Acting foreign minister Amir Khan Muttaqi and some other members of the Taliban dispensation.

In the meeting, the Taliban side had assured the Indian team that adequate security will be provided if India sends its officials to the embassy in Kabul.

India has not recognised the new regime in Afghanistan and has been pitching for the formation of a truly inclusive government in Kabul besides insisting that Afghan soil must not be used for any terrorist activities against any country.

India has been pitching for providing unimpeded humanitarian aid to Afghanistan to address the unfolding humanitarian crisis in the country.

Concerned over developments in Afghanistan, India hosted a regional dialogue on the situation in the country last November that was attended by NSAs of Russia, Iran, Kazakhstan, Kyrgyzstan, Tajikistan, Turkmenistan and Uzbekistan.

The participating countries vowed to work towards ensuring that Afghanistan does not become a safe haven for global terrorism and called for the formation of an “open and truly inclusive” government in Kabul with representation from all sections of Afghan society.