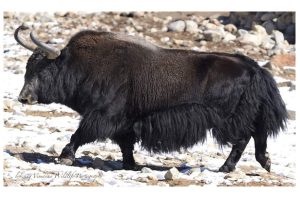 Dr. Mishra briefed about their work on the identification, characterisation, registration, documentation, monitoring and conservation of animal genetic resources. He apprised about the mission towards Zero Non-Descript AnGR of India that emphasises the significance of characterisation and registration of the non-descript population of the country along with their conservation and improvement.

Dr. Mishra informed about their plan to make Ladakh the first Indian Zero Non-Descript AnGR region. He also briefed about the ongoing process to identify and characterise the new and non-descript populations of Ladakh such as Chang-khi (wild dogs found in the Changthang area), yak, and donkey. He informed that the native cattle from Ladakh called ‘Ladakhi cattle’ was recognised as the 42nd cattle breed of India.

Dr. Mishra informed that Ladakhi cattle are a natural source of A2 milk. He apprised about the presence of hypoxia-inducing factor-1 (HIF-1) and its regulatory genes in Ladakhi cattle that produce homeostatic responses to hypoxia in higher altitudes of the Trans-Himalayan region.

LG Mathur suggested that the milk of Ladakhi cattle and yak may be promoted among tourists as the milk is enriched with anti-oxidant and hypoxic properties to promote high-altitude areas of Ladakh. He stated that this would also enable locals to earn more money for their livelihood.

He stated that a breeding programme may be conducted for Chang-khi once they are recognised as a native breed of Ladakh.