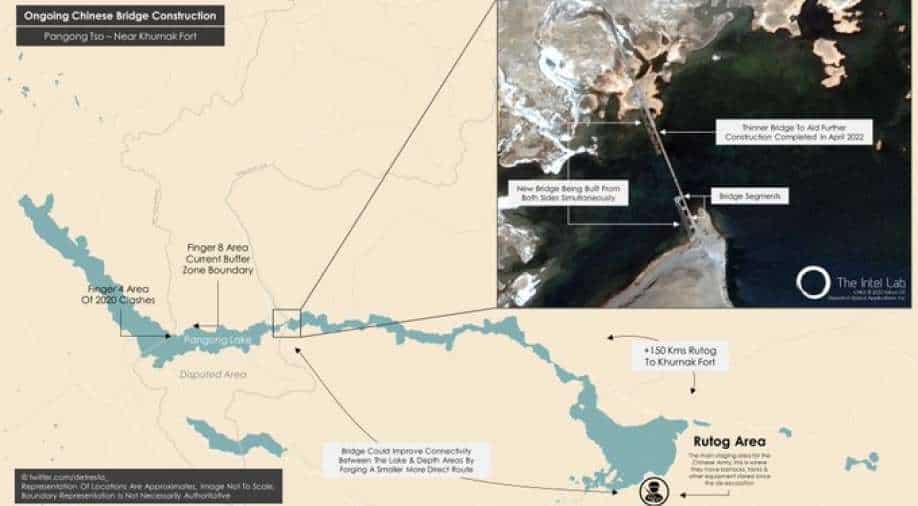 Latest satellite images have come to the fore, showing China’s increased infrastructure activity close to the Indian borders near the northern Ladakh territory.

The image shows China’s People’s Liberation Army making a massive bridge to carry heavier vehicles near the Pangong Tso Lake—the 135-km-long landlocked lake that is partly in the Ladakh region and partly in Tibet and has witnessed skirmishes between India and China since May 2020.

According to a report in The Print, this is the second bridge that China is building over the territory held by it at Pangong Tso. The report claims that it is capable of carrying armoured columns.

The report states that the first bridge—whose construction started at the end of 2021 and finished in April—will be used as a service bridge for the construction of the second.

Quoting defence sources, the report claimed that China is using the first bridge to install its cranes and bring other construction materials. The new bridge is right next to the bridge built earlier. This new bridge is much bigger and wider than the previous one.

The source said that China’s construction of the new bridge was seen three weeks ago.

Watch | Gravitas: China blows up replica of Taiwan’s naval base

The sources further said that the aim of constructing these bridges is to move their heavy armoury vehicles close to the Indian border and have multiple routes to counter any possible operations by the Indian forces on the southern banks of the Pangong Tso in the future.

This comes at a time when the stand-off between India and China in Ladakh enters its third year. In May 2020, Indian and Chinese forces engaged in an aggressive melee along the border, including disputed Pangong Lake in Ladakh and the Tibet Autonomous Region.

The skirmish was said to have been triggered after the Chinese forces objected to the Indian road construction at the Galwan Valley.

The fight led to casualties on both sides. While the Indian Army lost 20 soldiers, the Chinese side allegedly lost over 40 troops—which Beijing has not officially acknowledged.