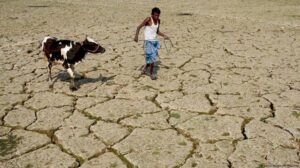 The spectre of climate change is here to stay and even worsen, say climate scientists as searing winds blow across swathes of north India, including New Delhi where temperatures have crossed 49 degrees Celsius, and flash floods ravage parts of the northeast.

A day after two weather stations in Delhi saw temperatures of more than 49 degrees Celsius and neighbouring Gurgaon registered 48 degrees Celsius, the highest since May 1966, experts on Monday analysed the incidence of extreme weather events and sounded a dire warning.

With increasing temperatures as a result of global warming in South Asia and the consequent exceeding levels of heat and humidity, it is predicted that we will have more intense, longer and frequent heat waves in India, environmentalist and climate scientist Shakil Ahmad Romshoo told PTI in a phone interview from Srinagar.

Over the last few decades, global warming has been on an accelerated pace and its marks can be seen in any single day of global weather since the 2000s. Generation Z has never lived a day without feeling the influence of global warming, added Roxy Mathew Koll from the Indian Institute of Tropical Meteorology in Pune.

The national capital recorded its second hottest April this year since 1951 with a monthly average maximum temperature of 40.2 degrees Celsius. Other north Indian states, including the hill areas of Uttarakhand, Himachal Pradesh, Jammu and Kashmir and Ladakh, also recorded temperatures way above the normal level this season.

While north India battled high temperatures, parts of Kerala and Lakshadweep islands saw heavy rainfall on Sunday. Besides, the weather office sounded a red alert across five districts in Kerala. And in the east, Assam’s Dima Hasao district has been hit by flash floods and massive landslides at several places, snapping rail and road links.

According to Indian Meteorological Department data, the average maximum temperature over northwest and central India for April this year has been the highest in 122 years.