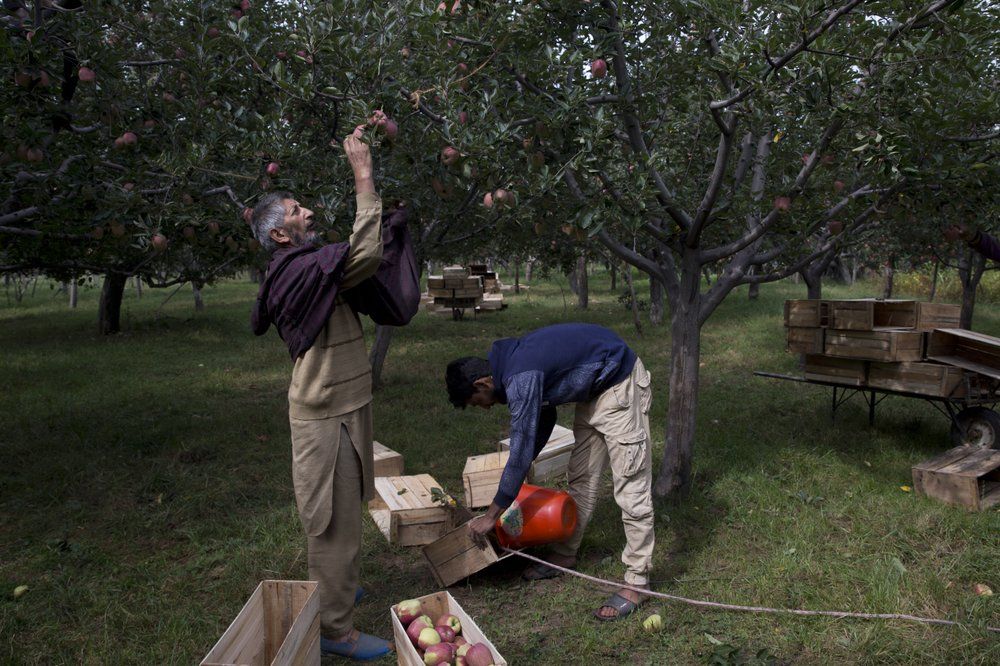 Not too long ago, villages in north Kashmir’s Pattan sub-district were surrounded by vast paddy fields. The villagers would produce enough rice—a staple diet in Kashmir—to be self-sufficient.

A few kilometres away from Pattan town stands Shirpora village. A narrow road lined with willow and poplar trees runs parallel to bounteous apple orchards at the entrance to the village, which sits at the base of a hill, now defiled by soil excavators. Thousands of truckloads of soil have been dug from the hillside to build Kashmir’s only rail line, and for a thriving construction industry.

In this pastoral backyard, the education and economic standards of most of the people could be classified as middling. While quite a few families depend on government employment or businesses, the majority depends on horticulture as their livelihood. The average landholding here is half an acre.

Since the 1950s, when the “land to the tiller” reforms across Jammu and Kashmir empowered peasants by giving them possession of the land they were already cultivating under the oppressive Dogra rule, the villagers were financially well-off till the mid-1990s. Then they started facing water shortage, affecting irrigation of their paddy fields. By 2000, there was no water for irrigation left. The stream that used to supply water for both homes and fields had dried up.

That year, around 70 per cent of the villagers converted their paddy fields into apple orchards. By 2001, the rest had also planted apple on their farmland. But long before they had converted the paddies into apple orchards, the villagers were already suffering from a severe shortage of drinking water. While pipes were laid to shore up the drinking water supply, irrigation remained a challenge.

“Every year, we were facing water crises. Rice cultivation was turning unprofitable. So the entire village decided to switch to horticulture and grow apples,” said Tariq Ahmad Tantray, 39.

Tariq is also the village headman. On May 8, this correspondent caught up with him and other villagers in the main market, where they explained how changing weather had affected their livelihood. From rice cultivators three decades ago, they had become apple farmers overnight. Now, they were worried about falling apple produce.

Despite the sultry weather, many youngsters could be seen lounging near shops, some wearing pherans—the long woollen cloak Kashmiris use during winters. One of them said the weather couldn’t be trusted, that it could quickly turn chilly, so it was better not to remove the pheran.

They pointed at the dry bed of a stream that ran along the shopfronts, saying it had dried up before their eyes. It had once been the main source of water in the village.

“Unlike apple orchards, paddy needs plenty of water. So it was collective wisdom to shift to apple cultivation,” said Tariq.

Like other villagers, Tariq too planted the Red Delicious apple variety. Those days, farming was not difficult as they didn’t need much pesticide. Every year in March, Tariq would spray pest-repellent oil on the apple trees before the trees would start to bud new shoots. In summer, he would follow up with a round of Dithane spray—a broad spectrum fungicide—to prevent a fungal outbreak.

Three decades ago, the neighbouring villages of Zangam, Mamosa and Nehalpora were also cultivating paddy. They grew apples only in the karewa (elevated table-land) at Nehalpora.

Tariq’s father owned four kanals of karewa at Nehalpora, where they grew apples, before he sold it in 1996 after the trees got affected and leaves started drying up.

For a few years after converting the paddies into orchards, Shirpora residents were happy. In the first year of production, Tariq donated 70 boxes of apples to a local mosque. In the following years, his apple orchard, spread over eight kanals (6.4 acres) behind his two-storey house would produce “substantial quantity of good quality apples”.

But output started falling in 2014. Tariq and other villagers started spraying pesticides to save their crops. He said not even 14 to 16 rounds of pesticide spray could stem the crop loss.

“We have small landholdings, and it is decreasing by the decade, even as our families keep growing. It takes us more to keep an apple orchard running than what we earn from it,” said Tariq. Ghulam Ahmad Tantray, 85, agreed. Tariq said the fast-changing weather is playing havoc with the produce.

As the discussion intensified, the villagers ask us to go on a tour of their orchards. Tariq points towards a tree with dense foliage, saying that a week ago, it could have easily produced 15 to 20 boxes of apples. “But after last week’s hailstorm, at least 90 per cent of the apples are damaged,” says Ghulam.

Another farmer, Mohammad Rafiq Rather, said that last year, following expert advice, he had sprayed pesticides on his apple orchard, spread over two kanals. This year, there are no apples on the trees, and the leaves have also dried up.

While Tariq blamed climate change for his losses, Rather blames an unregulated influx of low-quality or spurious fertilisers and pesticides in the market.

“There are scores of pesticides in the market. You don’t know which is genuine and which isn’t before the damage is done,” he added.

Ghulam disagreed. “I’ve seen more than 80 springs in my life. I haven’t seen such weather change as mow. It is scorching hot one day. Next day, there’s a hailstorm. It is followed by strong winds, then sunny weather and then, biting cold. What can a farmer do in such mercurial weather conditions? We are at a loss. Only God can save us,” said Ghulam, looking towards the sky.

If apple production in Kashmir gets impacted by climate change, as most of these villagers felt, it can devastate Kashmir’s economy. Jammu and Kashmir are already food deficit, and any crisis in apple production will destroy its thriving apple economy.

Apple cultivation in India is dominated by Kashmir, which produces 78 per cent of India’s total annual output of around 25-26 lakh metric tonnes (MT). The apple industry is Kashmir’s largest employment generator, providing 400 man-days of work per year per hectare of orchards, employing 3.5 million people, and contributing about 10 per cent to its GSDP.

Kashmir’s apple story started in the 1950s, soon after the land reforms. Cultivation was confined to Sopore in north Kashmir, with orchards planted over 12,000 hectares of land by 1952. Over the next decade, the Valley would produce around 48,000 MT of apples, which were locally consumed.

Since 1962, the state horticulture department and the Sher-i-Kashmir University of Agriculture, Science and Technology (SKUAST), turned around the apple economy for the farmers, providing timely advice and introducing high-growth varieties to the Valley. By 2020-21, the area un-d-er apple cultivation was 3,35,000 hectares and production was 19.85 lakh MT.

The government concedes that J&K has to import about 7.51 lakh MTs of foodgrain every year. Foodgrain production in Kashmir had touched 9.9 lakh MTs by end-2013-14. But the deficit remains.

The government says the deficit is mainly due to geographical and climatic conditions, and the conversion of agricultural land for horticulture and other purposes. Independent research by the office of the Supreme Court commissioners in 2008, titled Hunger in the Valley, revealed that the shortfall arose very recently. Until 1990-91, J&K had produced surplus food. Thereafter, the deficit in foodgrains began, reaching 35 per cent in 2000-01, with the upward trend continuing since then.

Villagers in Shirpora are not concerned about larger issues like the food deficit. They are getting rations from the local food department store and the market, but falling apple production is a real worry.

“If apple production falls, our fields will turn barren,” said Ghulam. And his apprehensions are real.