Leh: The 114 Indian Army soldiers who died defending Rezang La in the 1962 war with China were remembered at the Rezang La War Memorial with a stirring anthem composed in their honour at the four-day Ladakh International Music Festival.

The anthem was sung by singer and composer Joi Barua and his band on May 4, 2022.

The anthem is a tribute to Major Shaitan Singh and his men, who went into battle with little more than their indomitable spirit on November 18, 1962. For the record, the 13th battalion of the Kumaon Regiment was entrusted with the defence of Chushul. Its C Company, consisting of 117 men, was responsible for holding Rezang La.

General K.S. Thimayya, a most celebrated Kumaoni and independent India’s fourth Army chief, has applauded the defenders of Rezang La thus: “In military history, you rarely come across such examples when facing such heavy odds; the men fought to the last bullet and the last man.”

The Rezangla Anthem was conceptualised by Sushil Chaudhary, founder and chief executive, Picturetime, composed and sung by Joi Barua, and written by Ibson Lal Baruah. The production was handled by Pawan Rasaily, and mixing was done by Abani Tanti in Mumbai. Chaudhary is also director of the Ladakh International Music Festival.

While performing live at the festival, band members Manasquam Mahanta and Siddhartha Barooa were on guitars, Amitabh Barooa on bass, Pritam Boro on keyboard and Simanta Choudhury on drums. Rocky Gogoi was the sound engineer.

“When I sang and launched it [the anthem] – I was in a dream or trance-like state. I, along with the band members, were looking at the Rezang La mountain pass where the famous battle had happened. We did feel another force channeling into us while we were playing and singing it. The legacy of Shaitan Singh, perhaps! Suddenly, the sun had an otherworldly halo – it was like a cosmic phenomenon was directly above us. Everyone noticed. It was like a sign from the gods who were showing up for this. I was left mesmerised. As an Indian, I felt truly unique and special at that moment, to be able to be sing this to the Indian Army which was seated in front of me. Instantly, like a whiff of fresh breath, a sense of purpose was installed in my life once again… Jai Hind!” Barua said. 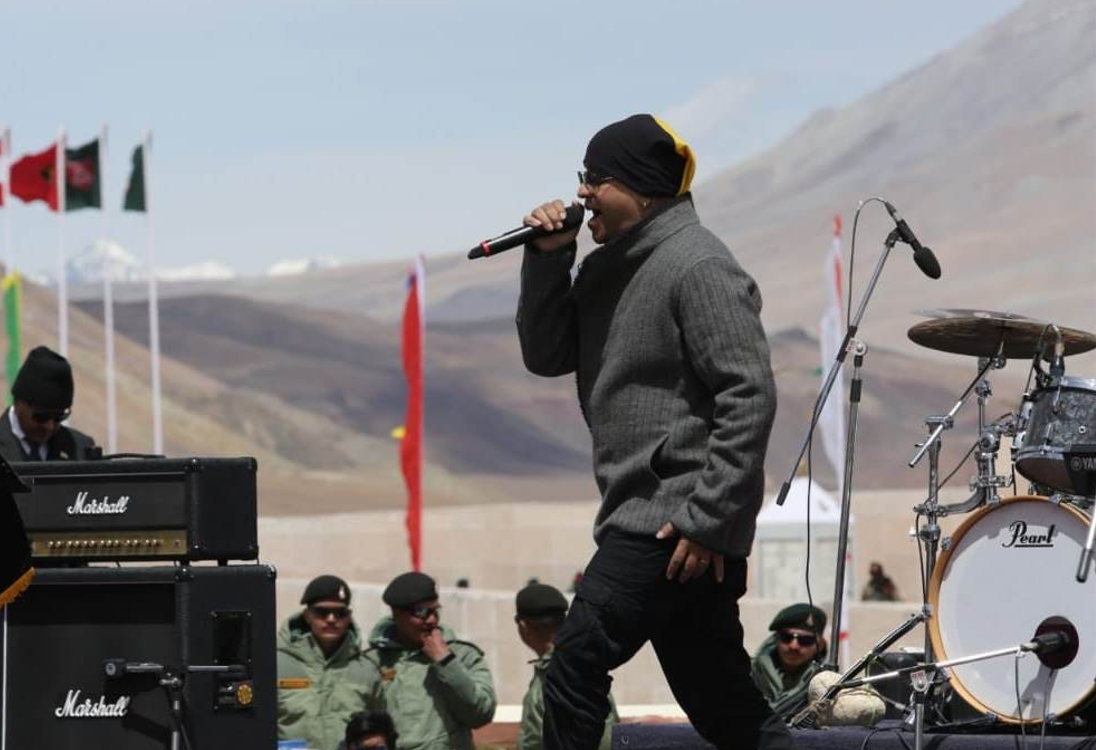 “In the 1962 Indo-China War, 114 Indian soldiers died killing about 1,300 Chinese soldiers while defending this post in Eastern Ladakh.  This site on the LAC [Line of Actual Control] has since become holy for the Indian Army. I came to know about this in a conversation with my friend Sushil Chaudhary at the International Tribal Film Festival on March 22, at Dirang, Arunachal Pradesh,” Barua said, explaining the backstory.

He continued, “While we were discussing our mutual love for the hills and mountains over a cup of tea, the conversation soon veered towards Ladakh, and to the story of Rezang La. In the next two weeks we found ourselves on this exact spot. There were a lot of soul searching conversations, and also discussions with the army which led to the thought of the anthem as well as a festival celebrating the brave-hearts.”

“After a short break we started our journey back to Leh with the Pangong Lake on our left and the frozen Chang La Pass ahead,” he said.

Music bands like the Indian Ocean, Parashara, Tetseo Sisters, Joi Barua and Band, and DJ Anna and Ali Burns were some of the names that enthralled the audience at the festival.

Apart from music, internationally acclaimed Ladakhi designer Jigmat Norbu of Jigmat Couture captured the audience on the second day with his fashion sequence celebrating weaves associated with fertility, mother and child. “A woman’s regenerative abilities are revealed through her weaving; the making of the cloth is regarded as an expression of her reproductive nature. When it comes to men, weaving is considered as an expression of procreative abilities. There are many such stories and myths,” Jigmat shared. “

Everything is related to something in Ladakh and each motif has a deeper significance. At Jigmat Couture, we stick to traditional, age-old production practices. These are seasonal; it all starts in the summer when we begin collecting various fibres like pashmina goat wool, yak hair and sheep wool.” Actor Richa Chadha, who was invited as the guest of honour, closed the first leg of the festival. “This has been a beautiful experience and this festival is such a brilliant initiative for local talent. The people of Ladakh are immensely sweet and innocent, and I’m so grateful for their immense warmth,” she said.

Also read: How Partition and the Borders It Brought Changed Hindustani Classical Music

Geared towards youth engagement, the first half of the festival was a band competition where five to six local rock bands got a chance to showcase their talent. Local Ladakhi bands who performed were Faisal Ashoor Band, Rolyangs band, Da Shugs, Acoustive and Maryul Semyangs to name a few.

Festival director Choudhary, said that the emphasis of this music festival isn’t just on what happens here but what the audience takes from it afterwards. “Festivals can prompt long-term behavioural change, so we are very choosy with our venues. People are open to new ideas, and a festival invites them to have a different conversation. We cause a conscious cultural shift – using less plastic, reducing waste, living sustainably. If these can be achieved on site, they can make a difference long after people have gone home.”