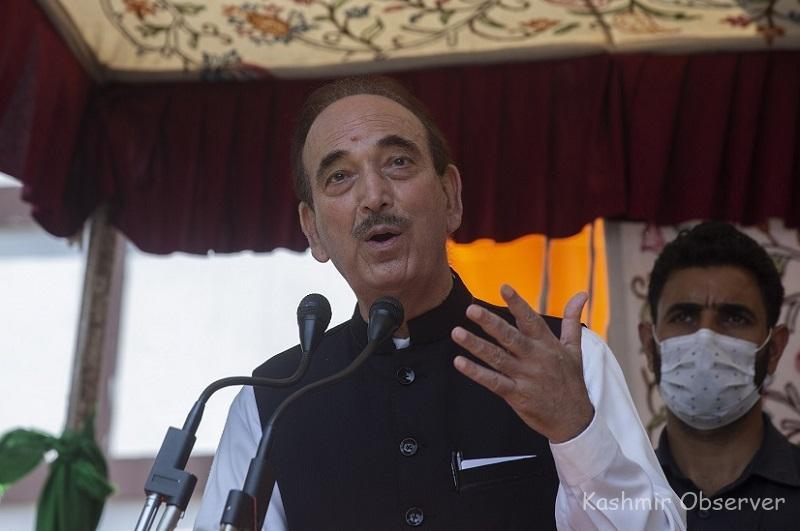 Ramban- The real ‘Jehad’ is to fight against poverty and unemployment, rather than against any leader, party or religion, senior Congress leader Ghulam Nabi Azad on Saturday.

Addressing a public rally here, he reiterated the demand for restoration of statehood of Jammu and Kashmir before assembly elections, saying the bureaucracy is no match to popular rule in fulfilling the aspirations of the people.

He said the people of the country are suffering due to the price hike of essential commodities and the Congress has been fighting over it within and outside parliament.

Jehad (holy war) is not fighting against another religion. The real ‘Jehad’ is to wipe out poverty and unemployment which is our biggest enemy, rather than any leader or party, Azad said.

The former chief minister said that he does not consider any leader or party as his enemy.

There has been a spurt in the prices of fuel and other daily use items including vegetables and pulses. The domestic gas was available to the people for Rs 400 during the Congress rule, but now the price has gone up nearly three times, bringing misery to the commoners, Azad said.

He said he is a less politician and a more reformer as I believe there is a need for reforms to end the evils of discrimination and maltreatment .

Azad claimed the present government is not treating everyone equally and is taking anti-people steps like evicting people from their land which they have been possessing for decades together.

The Congress leader said the people of J&K are suffering as there is no alternative to the democratic government.

The bureaucracy is no substitute for the popular government. We cannot hold them responsible for their failure to mitigate the sufferings of the public. They are not meant to visit far-off places and listen to the public as they are constitutionally assigned the job of working in offices, Azad said.

Raising the demand for early restoration of statehood followed by assembly elections, the Congress leader said the people of J-K need a democratic government and not central rule, which is going on after the fall of the previous government in 2018.