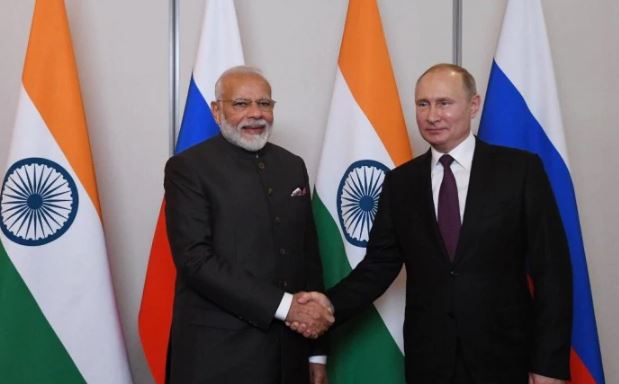 New Delhi: India and Russia are set to ink a raft of pacts to further boost cooperation in key areas of defence, trade and investment, energy and technology at the summit talks between Prime Minister Narendra Modi and President Vladimir Putin Monday, government sources said.

In the summit as well as in the inaugural ‘2+2’ defence and foreign ministerial talks, the two sides are also expected to focus on the situation in Afghanistan and the rising threat of terrorism including from groups like Lashkar-e-Taiba and Jaish-e-Mohammed.

It is learnt that the joint statement to be issued after the summit is likely to reflect India’s concerns over cross-border terrorism and the security implications arising out of the Afghan crisis.

According to the Ministry of External Affairs (MEA), PM Modi and President Putin will begin the summit talks at 5:30 pm and the Russian leader will emplane from Delhi at 9:30 pm.

Ahead of the summit, India has cleared the long-pending AK 203 Kalashnikov rifles deal worth nearly Rs 5,000 crore for production of over five lakh such rifles at Korwa in Amethi by an Indo-Russian joint venture.

The two sides are also likely to wrap up the final phase of negotiations for a logistics support agreement, which is likely to be signed either during the two-plus-two talks or at the summit.

In reflection of their time-tested defence ties, India and Russia are also set to renew for the next decade a framework for military-technical cooperation at the summit besides announcing a joint commission on technology and science.

The two sides may also firm up a number of defence procurement proposals besides deliberating on the long-pending project for joint production of 200 twin-engine Kamov-226T light helicopters for Indian armed forces.

According to sources, India is likely to apprise the Russian side about its position on the eastern Ladakh border row as well as its concerns over various regional developments.

Asked about any possible Russian role in resolving the row, the sources said India always believed in bilaterally addressing issues.

The sources said President Putin’s decision to visit India notwithstanding the current COVID-19 situation in Russia reflected the importance he attaches to the relationship with India.

“December 6 will be a full Russia Day,” said a source referring to back-to-back important meetings.

The day will begin with Defence Minister Rajnath Singh’s talks with his Russian counterpart Shoygu under the framework of the India-Russia Inter-Governmental Commission on Military-Technical Cooperation.

Separately, External Affairs Minister S Jaishankar will hold talks with his Russian counterpart Lavrov. Then the foreign and defence ministers of the two sides will hold the ‘2+2’ dialogue at 11:30 am.

Prime Minister Modi and President Putin will hold a one-on-meeting before the 21st India-Russia summit. A dinner will also be hosted for the Russian leader.

The pacts to be signed will cover a wide range of areas including trade, energy, culture, defence and technology, the sources said.

Besides government-to-government agreements, a number of other pacts are also set to be firmed up on the sidelines of the summit, the sources said.

“Despite global geo-political changes, our relations with Russia have been very steady,” said another source.

On cooperation in areas of defence, sources said the two sides are set to focus on co-production and co-development of military equipment and platforms.

Referring to investment ties, they said the target of USD 30 billion has already been met in 2018 and now the focus is on raising it to USD 50 billion by 2025.

Asked about Russia’s strong opposition to Quad comprising India, the US, Japan and Australia, the sources said New Delhi does not belong to any camp and it has been extending issue-based support on the basis of the evolving situation in the Indo-Pacific.

They said Russia appreciates India’s vision for the Indo-Pacific.

On India-Russia trade, they said efforts would be to diversify trade ties which has till now been dominated by cooperation in the energy sector.

“We are looking at new drivers of growth,” the source said.

The sources said India is also keen on boosting trade relations with the Russian Far East and 11 governors from the region have been invited for the upcoming Vibrant Gujarat conclave.

The last India-Russia Annual Summit was held in September 2019 during the visit of Modi to Vladivostok. The annual summit could not take place last year due to the COVID-19 pandemic.

Both the countries have a mechanism under which India’s prime minister and the Russian president hold a summit meeting annually to review the entire gamut of ties.

So far 20 annual summit meetings have taken place alternatively in India and Russia.