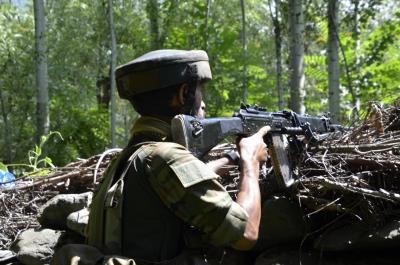 Srinagar, Oct 28 (IANS) A terrorist who was killed in an encounter with the security forces at Cherdari in North Kashmir’s Baramulla district has been identified, police said on Thursday.

“The dead terrorist is a hybrid type, identified as Javed Ah Wani of Kulgam district. He has assisted terrorist Gulzar (who was killed on October 20) in killing of two labourers from Bihar in Wanpoh. He was on a mission to target one shopkeeper in Baramulla,” J&K Police quoting IGP Kashmir Vijay Kumar said.

According to the police, the terrorists fired upon an army and police party which triggered the encounter.

Arms and ammunition, including one pistol and a grenade, was recovered from the possession of the slain terrorist.