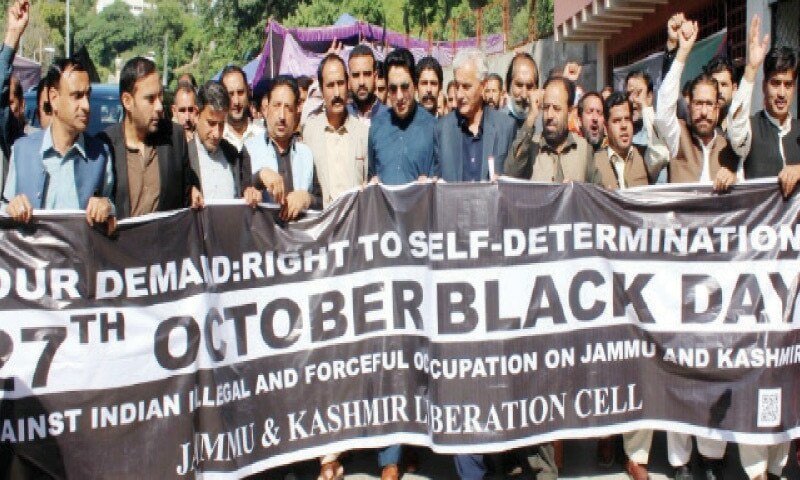 ISLAMABAD: The international community sleeps while three generations of Kashmiris have been victims of atrocities committed by the Indian government.

This was said by speakers during a webinar on Wednesday, organised to commemorate Kashmir’s Black Day. The event was organised by the India Study Centre (ISC) at Institute of Strategic Studies Islamabad (ISSI) in collaboration with the National Defence University (NDU).

The welcome remarks were given by ISSI Director General Ambassador Aizaz Ahmad Chaudhry, who said every year Oct 27 was commemorated as a day that had brought innumerable miseries to the Kashmiris. “Unfortunately, three generations of Kashmiris have been suffering from Indian atrocities. Though India has violated the United Nations Security Resolution nevertheless, the international community is silent on the Indian genocide of Kashmiris,” he added.

In August, 2019 India annexed and colonised Kashmir, he said, adding that it was a matter of concern that Indian atrocities in Kashmir had not been questioned by the international community.

Earlier in his remarks Dr Saif Malik, director of ISC, said though every day was filled with miseries in the lives of innocent Kashmiris, Oct 27 was observed and remembered when India on the same day in 1947, contrary to the aspirations of Kashmiris and against international norms, landed its troops in Srinagar.

Ahmed Qureshi, executive director of International Kashmir Lobby Group (Kashmir Dispute and the Role of International Community and Media) said there had been a global shift in the Kashmir conflict. There has been constant change in perspectives of the world on the Kashmir cause and now the international community sees the Kashmir cause in a different paradigm; this emerging shift goes in Kashmir’s favour, he said, adding that now even if Pakistan stopped speaking on Kashmir there are many archives present globally that have recorded the Kashmir issue.

“Pakistan has to capitalise on the global shift towards the Kashmir cause,” he added.

Dr Asma Shakir Khawaja, Head of Department of Strategic Studies, NDU said that Pakistan never expected that Article 370 and 35-A could be revoked by India.

“Currently, there are many human rights violations happening in Kashmir and Kashmiri students are considered traitors or Pakistanis. The revocation of Articles 370 and 35-A also violated the Shimla agreement signed between India and Pakistan in 1972,” she said.

In his views, retired Maj Gen Dr Raza Mohammad commented about India’s growing military expenditure worth $50 billion for arms sale and purchase of arsenal from the United States, United Kingdom, Russia and Israel.

Retired Gen Ehsanul Haq, chief guest of the event, said the conflict of Kashmir had shifted from a unilateral to multilateral conflict, adding that China’s embroilment in conflict with India in Ladakh, has added complexities for India.

Rallies and demonstrations were held in different parts of Azad Jammu and Kashmir (AJK) on Wednesday to condemn India’s invasion of the erstwhile princely state of Jammu and Kashmir on this day in 1947 on the basis of a false ‘instrument of accession’.

Participants of the rallies who were wearing black armbands and carrying black flags, placards and banners inscribed with anti-India and pro-freedom slogans, called for immediate realisation of the United Nations Security Council (UNSC) resolutions, envisaging a free, fair and impartial plebiscite in the disputed Himalayan region so as to have this long standing dispute resolved in a peaceful manner.

In Muzaffarabad, a rally was taken out from the District Headquarters (DHQ) Complex to the office of UN Military Observers Group for India and Pakistan (UNMOGIP) near Domel, the confluence of rivers Jhelum and Neelum, to mark what has always been regarded by the Kashmiris as ‘Black Day’.

AJK minister for local government and rural development (LG&RD) Khawaja Farooq Ahmad and minister for law and information Sardar Faheem Akhtar Rabbani, who were leading the rally, handed over a memorandum to the UN observers, reminding the world body of its seemingly forgotten responsibility to grant right to self-determination to the Kashmiri people through a UN sponsored referendum.

Earlier, speaking at a public meeting on the premises of DHQ Complex, Mr Ahmad, who alsoheads AJK government’s committee for national events, pointed out that theinvasionofJammu and Kashmirand its occupation by India onOctober27, 1947 was the root-cause of tension and conflict in South Asia.

In his speech, Mr Rabbani pointed out that India had unlawfully landed its troops inSrinagaron the pretext of an ‘instrument of accession’ that was fake beyond doubt and had not been seen by anyone to this day.

“Kashmiris have not accepted India’s occupation of their motherland for a fraction of a second, a demonstration of which was seen by the whole world at the weekend when Pakistan inflicted a humiliating defeat on India in the cricket field of Dubai,” he said, referring to the celebrations in both parts of Kashmir after the Green Shirts clinched match against India in the ICC T20 World Cup match.

Earlier special prayers were made for the deliverance of Syed Ali Geelani and other Kashmiri martyrs.

A photo exhibition along with a protest walk was arranged by Rawalpindi Arts Council (RAC) on Wednesday to mark Kashmir’s Black Day.

Naheed Manzoor was chief guest at the ceremony. It was attended by limited people due to closure of roads in the garrison city.

The photographs depicted brutality of the Indian Army in Indian Illegally Occupied Jammu and Kashmir and difficulties faced by innocent Kashmiris.

Speaking on the occasion, Ms Manzoor said India has subjected the Kashmiri people to the worst state terrorism, but the resolve of the Kashmiris did not waver.

She said the day was not far when Kashmiris will breathe freely. “No one knows the value of independence better than Kashmiris,” she added.

Director of the arts council Waqar Ahmed said India distorted the rights and identity of Kashmiris on Aug 5, 2021. “Oct 27 and Aug 5 will always be remembered as a black day in history,” he said, adding that the Indian army is involved in the genocide of Kashmiris in the occupied valley. — Additional reporting by Aamir Yasin