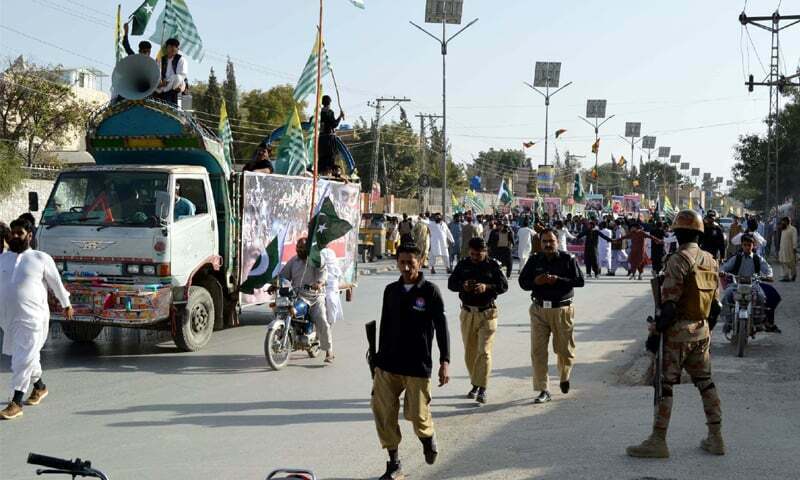 QUETTA: Wednesday was observed as a ‘black day’ across Balochistan to express solidarity with the oppressed people of occupied Kashmir.

Rallies were organised in all 34 districts of the province in which thousands of people took part to condemn the illegal occupation of Jammu and Kashmir by India.

In Quetta, a rally was taken out from the Governor House which marched through main roads and streets of the provincial capital. Led by Commissioner of Quetta Sohail-ur-Rehman Baloch, the participants of the rally carried the national and Azad Kashmir’s flags, and placards and banners inscribed with slogans against India.

The participants chanted slogans in favour of the people of occupied Kashmir who have been struggling to achieve their right to self-determination for the past 74 years. They paid rich tribute to the Kashmiri martyrs and said their sacrifices would not go in vain.

They said that the people of Pakistan would continue to support the struggle of Kashmiri brothers and sisters against the illegal occupation of Jammu and Kashmir by India.

Speaking at the rally, Commis­sioner Sohail-ur-Rehman Baloch said that October 27 is a dark day in the historical context of the Muslims of the subcontinent.

He said the Kashmiri people had been striving for independence from India and “today we express solidarity with the oppressed people of Kashmir and strongly condemn the illegal occupation by Indian forces”.

He said the government and people of Balochistan stood by the people of occupied Kashmir in their war of independence.

At the end of the walk, special prayers were offered for security of the country and for the independence of occupied Kashmir.