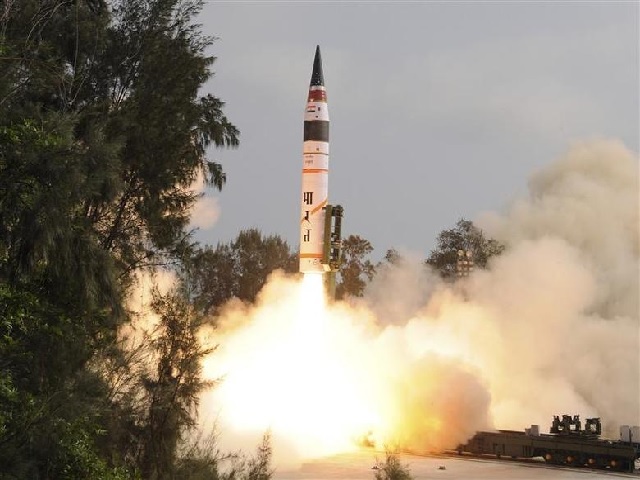 India, in a major boost to its military target, successfully test-fired surface to surface ballistic missile Agni-5 on October 27, 2021. The missile can strike a target at a range up to 5,000 km with a very high degree of accuracy.

The test-firing of Agni-5 was carried around 7.50 PM from APJ Abdul Kalam Island, in Odisha. As per the Defence Ministry, the successful test of Agni-5 is in line with India’s stated policy to have credible minimum deterrence that underpins the commitment to ‘No First Use’.

The successful test-firing of surface to surface ballistic missile Agni-5 has also come in the midst of a lingering border stand-off with China in Eastern Ladakh.

Surface to Surface Ballistic Missile, Agni-5, successfully launched from APJ Abdul Kalam Island, Odisha, today. The missile, which uses 3-stage solid-fuelled engine, is capable of striking targets at ranges up to 5,000 kilometres with a very high degree of accuracy: Govt of India pic.twitter.com/vrAI2y2LhD

• Agni-5, the indigenously developed surface to surface missile, is capable of striking a target at the range of up to 5,000 km. The missile used 3-stage solid-fuelled engine.

• The missile is about 17-metre long, 2-metre wide, and had a launch weight of around 50 tonnes.

• Agni-5, India’s ballistic missile can carry a nuclear warhead of more than one tonne.

• A lot of new technologies that have been developed indigenously were also successfully tested in the first Agni-5 trial.

What makes the Agni-5 missile different?

Unlike the other missiles of India’s Agni Series, the latest one Agni-5 is the most advanced. It has some new technologies that are incorporated with it in terms of navigation and guidance, warhead, and engine.

As per the official, the high-speed onboard computer and the fault-tolerant software along with reliable and robust bus guided India’s Agni-5 missile flawlessly.