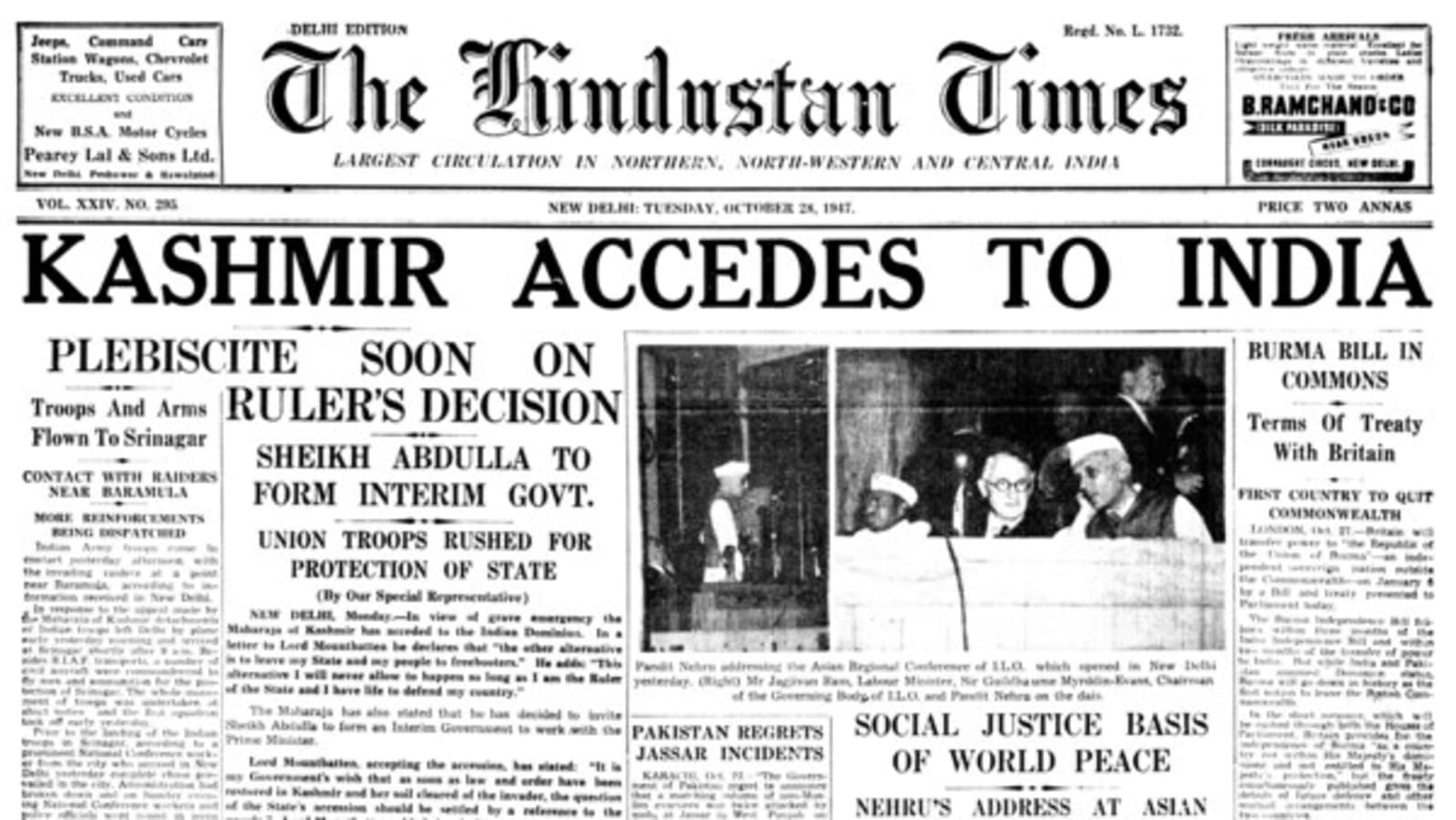 New Delhi- In view of grave emergency the Maharaja of Kashmir has acceded to the Indian Dominion. In a letter to Lord Mountbatten he declares that “the other alternative is to leave my State and my people to freebooters.” He adds: “This alternative I will never allow to happen so long as I am the Ruler of the State and I have life to defend my country.”

The Maharaja has also stated that he has decided to invite Sheikh Abdulla to form an Interim Government to work with-the Prime Minister.

Lord Mountbatten, accepting the accession, has stated: “It is my Government’s wish that as soon as law and order have been restored in Kashmir and her soil cleared of the invader, the question of the State’s accession should be settled by a reference to the people.” Lord Mountbatten added that Indian troops had been sent to defend the State and “to protect the lives, property and honour of your people.”

That Kashmir has been thus saved is the result of quick moves on the political chessboard. Indian troops left by air in batches for Srinagar this morning. They immediately took position at the aerodrome and in the capital of Kashmir and thereafter proceeded to Baramula where they engaged the raiders. It is generally agreed that the troops have shown great enterprise and done, a fine piece of Job.

Mr. Mehrchand Mahajan, Mr. V, P. Menon and Sheikh Abdulla left early this morning for Jammu to see the Maharaja. Mr. Menon returned this evening with the Instrument of Accession duly executed by the Maharaja, and immediately thereafter met the Governor-General, the Prime Minister and the Minister for States. The first news of the accession was announced over the radio and it caused widespread relief since there has been a great deal of anxiety about the safety of the people in Srinagar.

Apparently, the Pakistan leaders have been outwitted. Mr Jinnah’s arrival in Lahore and the Pakistan Defence Secretary visit to Peshawar were timed to coincide with the startling developments in Kashmir.

It is said that the attitude of Sheikh Abdulla and his colleagues and followers of the National Conference has been the most heartening aspect of the situation. The great leader of Kashmiris set his face sternly against the invaders and pledged his party’s full support to the Maharaja to throw out foreigners. He did not bargain in the crisis but placed his services unreservedly at the disposal of the Maharaja.

The Government of India, too, has set a fine example by declaring that even though Kashmir had acceded to the Indian Dominion it would still stand by the wishes of the people. This stand further strengthens its case in regard to Junagadh and Hyderabad and considerably enhances its moral stature.

Considerable surprise is expressed in New Delhi at the one-sided version that is being daily put out by B.B.C. of developments in Kashmir. Even today it stated that the revolt is of the local Muslim population of Kashmir, whereas the emergency has been caused by the attack from outside and as stated by the Maharaja, “the people of my State, both Muslims and non-Muslims, generally have taken no part at all.”