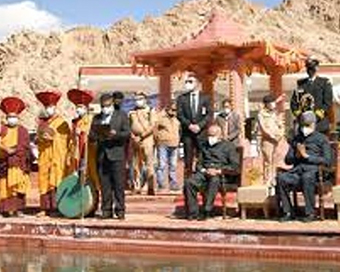 The President of India, Ram Nath Kovind, on Thursday performed Sindhu Darshan puja on the ghats of the Indus river on the outskirts of Leh.

Accompanied by his daughter Swati, Kovind is visiting Leh for the first time after the formation of the Union Territory of Ladakh.

Amid religious chants and drumbeats, the President, along with the Lieutenant Governor of Ladakh, R.K. Mathur, performed the Sindhu Darshan puja at the specially constructed ghat in Shey village, about 12 km from Leh, which is now the designated place for the annual Sindhu Darshan festival.

Earlier on Thursday morning, Mathur had welcomed Kovind at the Leh airfield, where he was accorded the ceremonial guard of honour.

The President is on a two-day visit to Ladakh, where he would celebrate Dussehra with the Army jawans in Drass. He will also pay tributes at the Kargil War Memorial there.