Shershaah continues to make waves after it hit the web last month. The Sidharth Malhotra-starrer has become one of the most-watched films during the COVID-19 era and the spotlight has gone beyond online views, with appreciation from the family of Captain Vikram Batra, the Kargil hero on whom the movie is based. The film was recently chosen to launch the inaugural Himalayan Film Festival as an opening feature film.

Sidharth felt overwhelmed by the experience of inaugurating the film festival. His co-star Kiara Advani too expressed her pride on seeing the film being honoured at the festival.

Sidharth took to Instagram to share pictures from the event where he was felicitated by Union Minister of Information & Broadcasting and Youth Affairs & Sports, Anurag Thakur. The actor extended his gratitude over the honour and sharing the stage with the leader.

Kiara Advani could not make it to the event and wrote that though she was in Mumbai physically, her heart was in Ladakh. Sharing Sidharth’s post about the festival, she also recalled giving the first shot of her debut film Fugly in the ‘beautiful town.’ Stating that Leh would always feel special, she termed the honour for Shershaah as a proud moment. 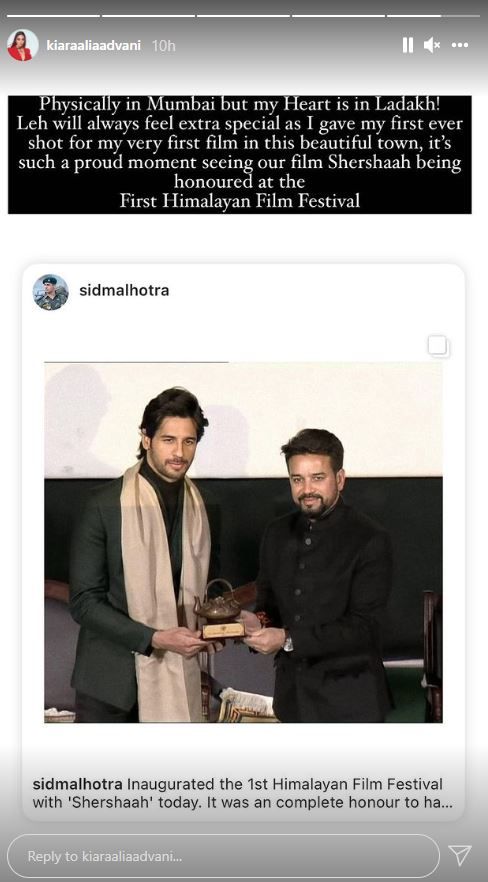 Shershaah, directed by Vishnu Varadhan, traced the story of Captain Vikram Batra’s heroics in the Himalayas during the Kargil War in 1999. The makers of Shershaah too shot in various parts of the region, like Ladakh and Kashmir. They had also met the family of the martyr in Palampur, Himachal Pradesh.

The 2021 Himalayan film festival is set to be held from September 24-28. The event provides an opportunity for filmmakers of the region to showcase their talent to a wider audience. A statement by the Information & Broadcasting Ministry stated,

“The Himalayan region of India attracts filmmakers from all around the globe due to its unique scenic endowment. The unique geography of the region is widely documented along with its indigenous people, traditional skills, and occupations. Film festival in this context presents an opportunity for the local filmmakers to narrate their stories to a wider audience.”