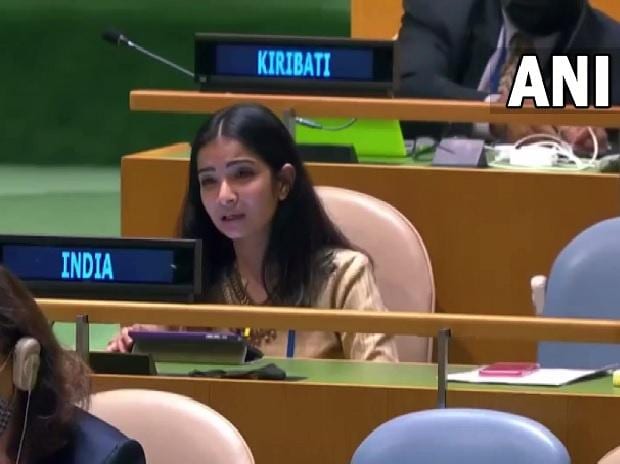 Pakistan, where terrorists enjoy free pass, is an “arsonist” disguising itself as a “fire-fighter”, and the entire world has suffered as it nurtures dreaded terrorists like Osama bin Laden in its backyard, India has said in a blistering retort after Prime Minister Imran Khan raked up the issue of Kashmir in his address to the UN General Assembly.

“We exercise our Right of Reply to one more attempt by the leader of Pakistan to tarnish the image of this august Forum by bringing in matters internal to my country, and going so far as to spew falsehoods on the world stage, First Secretary Sneha Dubey said in the UN General Assembly on Friday.

“While such statements deserve our collective contempt and sympathy for the mindset of the person who utters falsehood repeatedly, I am taking the floor to set the record straight, the young Indian diplomat said, slamming the Pakistani leader for raking up the Kashmir issue in his video address to the 76th session of the UN General Assembly.

“We keep hearing that Pakistan is a ‘victim of terrorism’. This is the country which is an arsonist disguising itself as a fire-fighter. Pakistan nurtures terrorists in their backyard in the hope that they will only harm their neighbours. Our region, and in fact the entire world, has suffered because of their policies. On the other hand, they are trying to cover up sectarian violence in their country as acts of terror,” Dubey said.

Khan, in his nearly 25-minute address, had spoken about the August 5, 2019 decision of the Indian government on the abrogation of Article 370 as well as the death of pro-Pakistan separatist leader Syed Ali Shah Geelani.

In the Right of Reply, Dubey strongly reiterated that the entire Union Territories of Jammu & Kashmir and Ladakh “were, are and will always be an integral and inalienable part of India. This includes the areas that are under the illegal occupation of Pakistan. We call upon Pakistan to immediately vacate all areas under its illegal occupation.

Khan and other Pakistani leaders and diplomats have consistently raked up the issue of Jammu and Kashmir and other internal matters of India in their addresses to the UN General Assembly and other forums of the world organisation.

Pakistan’s attempts to internationalise the Kashmir issue have gained no traction from the international community and the Member States, who maintain that Kashmir is a bilateral matter between the two countries.

Dubey said it is regrettable that this is not the first time the leader of Pakistan has “misused” platforms provided by the UN to “propagate false and malicious propaganda against my country, and seeking in vain to divert the world’s attention from the sad state of his country where terrorists enjoy free pass while the lives of ordinary people, especially those belonging to the minority communities, are turned upside down.”

With the international community marking this month the solemn occasion of the 20th anniversary of the dastardly 9/11 terror attacks, Dubey said the world has not forgotten that the “mastermind behind that dastardly event, Osama bin Laden, got shelter in Pakistan. Even today, Pakistan leadership glorify him as a ‘martyr’.”


“Regrettably, even today we heard the leader of Pakistan trying to justify acts of terror. Such defence of terrorism is unacceptable in the modern world,” the Indian diplomat said.

Categorically emphasising India’s position, Dubey said New Delhi desires normal relations “with all our neighbours, including Pakistan.” However, it is for Islamabad to work sincerely towards creating a conducive atmosphere, including by taking credible, verifiable and irreversible actions to not allow any territory under its control to be used for cross border terrorism against India in any manner.

Asserting that Member States are aware that Pakistan has an established history and policy of harbouring, aiding and actively supporting terrorists, Dubey said the country has been globally recognised as one openly supporting, training, financing and arming terrorists as a matter of State policy. “It holds the ignoble record of hosting the largest number of terrorists proscribed by the UN Security Council.”

“This is also the country that still holds the despicable record in our region of having executed a religious and cultural genocide against the people of what is now Bangladesh. As we mark the 50th anniversary this year of that horrid event in history, there is not even an acknowledgment, much less accountability, she said.

Highlighting that minorities in Pakistan – the Sikhs, Hindus, Christians – live in constant fear and state sponsored suppression of their rights, he said, “this is a regime where anti-Semitism is normalised by its leadership and even justified.

Dubey said that unlike Pakistan, India is a pluralistic democracy with a substantial population of minorities who have gone on to hold highest offices in the country including as President, Prime Minister, Chief Justices and Chiefs of Army Staff. India is also a country with a free media and an independent judiciary that keeps a watch and protects our Constitution.

“Pluralism is a concept which is very difficult to understand for Pakistan which constitutionally prohibits its minorities from aspiring for high offices of the State. The least they could do is introspect before exposing themselves to ridicule on the world stage,” the Indian diplomat said.

In his address, Khan said sustainable peace in South Asia is contingent upon resolution of the Kashmir issue.

He said Pakistan desires “peace” with India, as with all its neighbours. “But sustainable peace in South Asia is contingent upon resolution of the Jammu and Kashmir” issue, in accordance with the relevant UN Security Council resolutions, and the wishes of the Kashmiri people, he said.

He also called on the UN General Assembly to “demand” Geelani’s proper burial and rites.

On Afghanistan, Khan said, “for some reason, Pakistan has been blamed for the turn of events, by politicians in the United States and some politicians in Europe.

“From this platform, I want them all to know, the country that suffered the most, apart from Afghanistan, was Pakistan, when we joined the US War on Terror after 9/11.”

“At least there should have been a word of appreciation. But rather than appreciation, imagine how we feel when we are blamed for the turn of events in Afghanistan, he said.

Khan called upon the international community to strengthen and stabilise the Taliban government in Afghanistan, saying if the world community incentivises them, it will be a win-win situation for everyone.

He said there is a huge humanitarian crisis looming ahead and warned that a destabilised, chaotic Afghanistan will again become a safe haven for international terrorists.