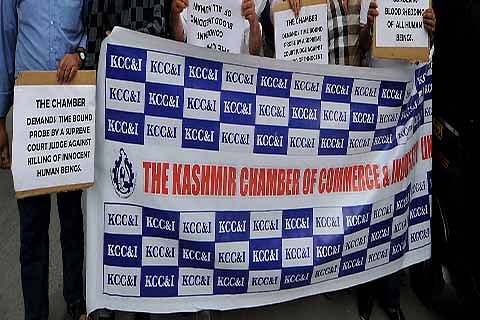 Srinagar: The Jammu Chamber of Commerce and Industry (JCCI) has called for a strike on September 22, to protest against the opening of Reliance Retail stores, alleging discrimination by the ruling Bharatiya Janata Party (BJP).

The call for a ‘bandh” was given by the apex traders body and several other business and trade organisations during a press conference in the winter capital of Jammu. The trade bodies have warned of intensifying protests against the government’s decision to open about 100 Reliance Retail stores in the region.

The traders claim the opening of these stores will affect their business which, according to them, is already facing challenges due to back-to-back lockdowns and political turmoil. The traders’ leaders also held a protest march, raising slogans against what they termed as ‘discrimination’ against the people of Jammu.

“There will be a complete shutdown on Wednesday, and we have support from all the traders and businessmen. These retail stores will generate employment for 500 persons and snatch employment opportunities from over 20,000 people, which will affect their families”, Arun Gupta, president of JCCI, said.

Gupta claimed that the policies introduced by the authorities were disturbing trade in Jammu and that they would allow this to happen. “If our demands are not met, we will call for an indefinite strike in Jammu,” he added.

He said they were willing to negotiate with the political leadership but no discussions had been held so far, which is why traders were facing a crisis.

Notably, many trade bodies had backed the Bharatiya Janata Party-led Central government’s decision to abrogate Article 370 that gave ‘special status’ to the erstwhile state of Jammu and Kashmir, which has now been downsized to a Union territory.

Civil society groups, business community and many Jammu-based political parties believed in BJP’s promises and felt that the decision to revoke Article 370 would end the alleged ‘discrimination’ against the people of Jammu. However, they now allege that their situation has only worsened since then.

At the press conference, the traders claimed that multiple issues had affected trade in Jammu, such as the government’s decision to end the Darbar Move, an annual shifting of the administrative secretariat between Srinagar and Jammu, which, they said, was taken arbitrarily and against their wishes.

“In 1988-89, the Darbar Move was stopped by the then government of Farooq Abdullah, but the decision was reversed after Jammu remained shut for 23 days. Back then, the BJP supported the strike,” Gupta said.

The traders’ leaders added that if BJP wanted to end ties between Kashmir and Jammu, the authorities should further divide Jammu and Kashmir into two separate Union territories, like Ladakh. “All issues and demands of Ladakhis have been addressed, but the people of Jammu are being discriminated against,” they alleged.

The trade leaders, in their statement, also pointed out that the various Central government delegations that visited the Union territories recently did not meet the “real” stakeholders, including businessmen.