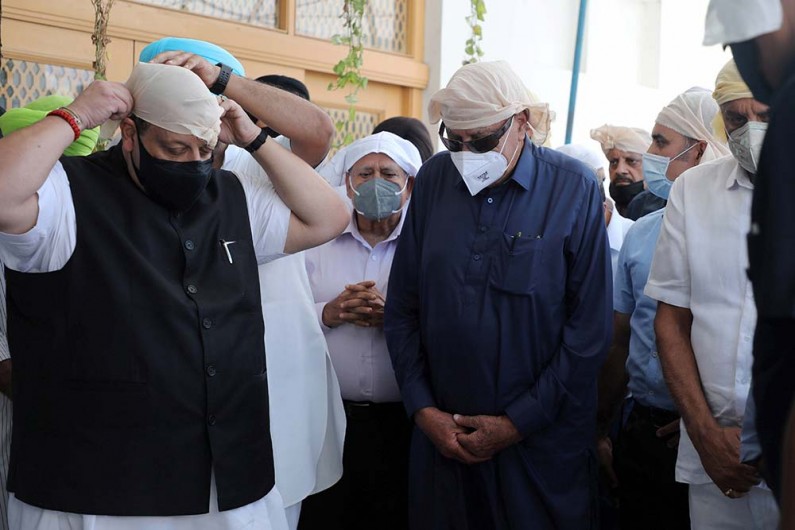 JAMMU, Sept 15: National Conference president Farooq Abdullah on Wednesday visited the Gandhi Nagar residence of senior party leader Trilochan Singh Wazir here to offer condolences to his family.
The highly decomposed body of the 67-year-old Wazir, a former Member of the Legislative Assembly, was found in a flat at Moti Nagar in West Delhi on Thursday last.
Accompanied by party leaders including Provincial president, Jammu, Devender Singh Rana, Abdullah took part in a special prayer meeting for the deceased, officials said.
Rajender Chaudhary alias Raju Ganja, a driver by profession, was arrested and is suspected to be involved in the conspiracy to murder Wazir. Police is looking for two more suspects Harpreet Singh (31) of Amritsar and Harmeet Singh of Jammu.
According to the police, the autopsy report has revealed that the victim had died of a gunshot wound in his temple.
The National Conference has demanded a CBI inquiry into the death of its leader.
“Multiple theories are making the rounds about the death and therefore to bring out the truth, an inquiry by the CBI should be ordered forthwith”, senior National Conference leaders led by Provincial President Rana had said in a joint statement here.
They said the investigations should be carried out on a fast track basis to bring the culprits to justice for the heinous crime committed.
The statement further said the National Conference leaders are meeting Lt Governor Manoj Sinha also to press their demand for a CBI inquiry into the death of Wazir. (Agencies)