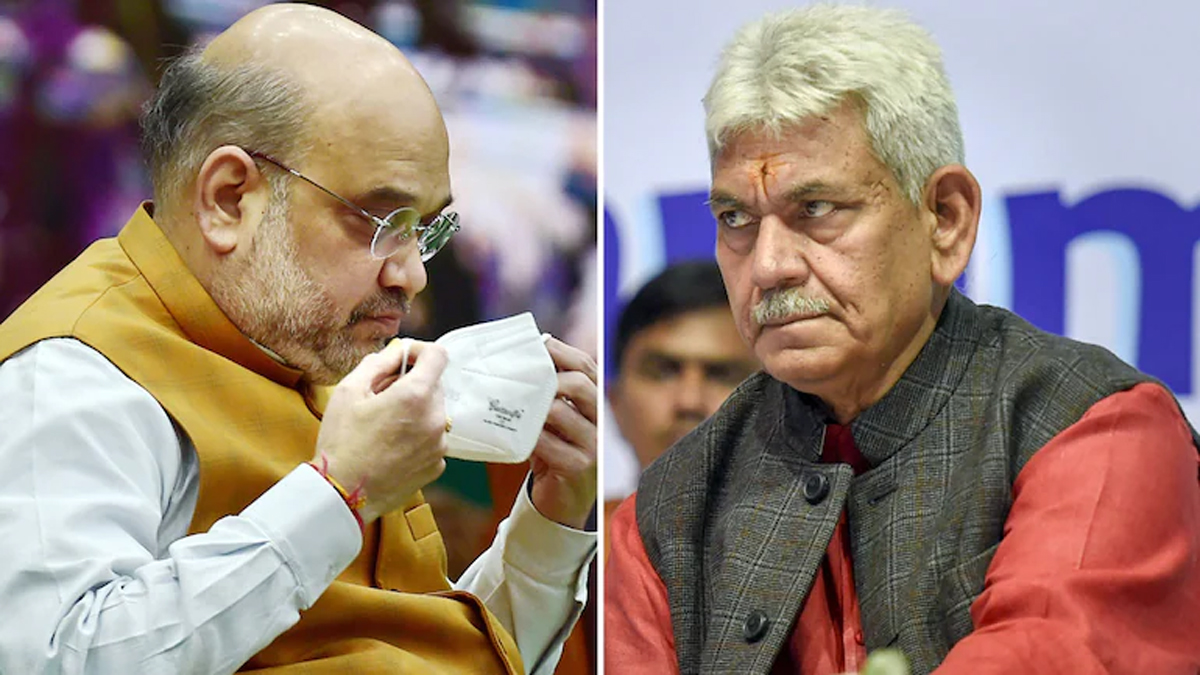 J&K to continue focus on 3 Ps
Book on achievements in 2 years being published
Sanjeev Pargal
JAMMU, Aug 3: Ahead of August 5 and 15 celebrations, Lieutenant Governor Manoj Sinha today met Union Home Minister Amit Shah in New Delhi and discussed with him prevailing situation on security, development and other fronts in Jammu and Kashmir especially during two years of abrogation of special status of erstwhile State of J&K and its bifurcation into two Union Territories.
Sinha’s meeting with Shah lasted more than 40 minutes.
Sinha is in New Delhi on four-day visit of the Union Capital and had yesterday met Road, Transport and Highways Minister Nitin Gadkari, Education Minister Dharmendra Pradhan and Rural Development Minister Giriraj Singh.
While there was no official statement on the Lieutenant Governor’s meeting with the Home Minister, sources said the celebrations and security arrangements for August 5 when J&K will complete two years as a Union Territory and August 15 when India will complete 75 years of Independence were discussed.
Jammu and Kashmir Government will focus on 3 Ps during August 5 celebrations (Peace, Progress and Prosperity), a slogan coined by Lieutenant Governor Manoj Singh for development of Jammu and Kashmir.
“Two years of achievements of Jammu and Kashmir after abrogation of special status including Articles 370 and 35-A and its bifurcation into two Union Territories of J&K and Ladakh will be showcased by the UT Government in the form of a book,” sources said, adding the Government will highlight progress made by J&K in all sectors in two years on August 5.
The booklet, according to sources, will contain progress achieved by Jammu and Kashmir during two years. It is being given final touch by the UT Government, they said.
Sinha is understood to have briefed Amit Shah on security situation and development works undertaken in Jammu and Kashmir during the meeting.
Situation has been quite normal in Jammu and Kashmir with no major incident reported. On the other, anti-militancy operations have picked up after COVID situation eased in the Kashmir Valley and a number of top militants including commanders of Lashkar-e-Toiba (LeT) and Jaish-e-Mohammed (JeM) have been eliminated.
The Lieutenant Governor is also reported to have briefed the Home Minister on various development initiatives taken by the Jammu and Kashmir Government in both urban and rural areas besides the powers being given to the Panchayati Raj Institutions for strengthening democracy at gross-root level and executing works in rural areas.
Security arrangements for August 5 and 15 were also reported to have been reviewed during the meeting. All security agencies are maintaining very high alert for the celebrations especially in the wake of fresh challenge posed by drones which are regularly being spotted in the border areas of Jammu, Samba and Kathua districts.
Sources admitted that though security agencies were braced up to thwart any kind of terror attack, drones remained a major challenge. However, they said, all security agencies were fully geared up to meet the threat and take preventive measures
At some of the security installations, anti-drone technology has been installed. Police had shot down a drone in Kanachak recently which was carrying 5.5 kg powerful Improvised Explosive (IED) device for terror strike in Jammu.
During his meetings with Nitin Gadkari, Dharmendra Pradhan and Giriraj Singh in New Delhi yesterday, Sinha had taken up the issues of road infrastructure development, New Education Policy and road connectivity in rural areas under Prime Minister’s Grameen Sadak Yojana (PMGSY).
The Lieutenant Governor is scheduled to return to Jammu and Kashmir tomorrow ahead of August 5 celebrations.
Sources said celebrations are expected to be low-key affair and will be confined to highlighting achievements of the Government during last two years.
Meeting of Sinha with some more representatives of the Central Government before return to Jammu and Kashmir are not ruled out.