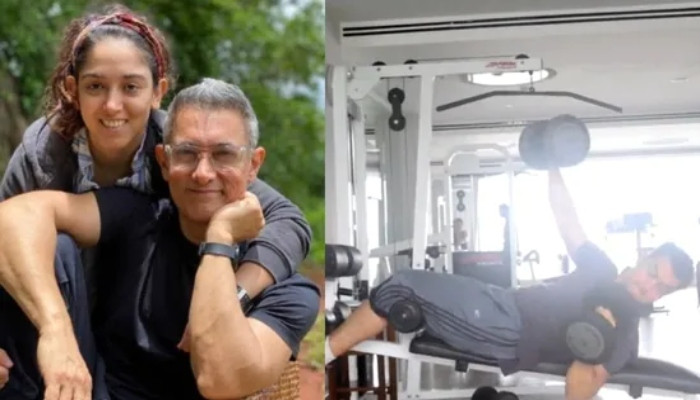 Bollywood superstar Aamir Khan is a known perfectionist and when it comes to adapt the perfect look for the character, he never fails to give his 100 per cent for every role that he plays.

The superstar actor had stunned his fans and movie critiques with his extensive gym trainings for his 2013 film Dhoom 3.

Recently, an old video of Aamir performing the ‘suspended alternative dumbell press’ during the making of Dhoom 3 and it has left his daughter Ira Khan stunned.

In the video, the Talaash actor can be seen working out with dumbells in his hands while his upper body was suspended in the air. The video was shared by an Instagram account called Poznic Training, who describes himself as Aamir’s personal trainer for Dhoom 3 and PK.

Sharing the video on her Instagram Stories, Ira Khan captioned it as, “What is that exercise?”

Sharing the video, the celebrity trainer said, “This exercise is just TOO good for rocking the core on chest day while also working on functional strength. It’s very much a ‘work out like an acrobat’ kind of exercise, so I had Aamir do it regularly during our film prep for his role as a professional acrobat in Dhoom 3.”

Meanwhile, Ira, who is dating fitness trainer Nupur Shikhare, has often shared pictures and videos of them working out at home.

On the work front, the PK star, who had previously stunned fans with his jaw-dropping body transformation, when he had gained weight for Dangal, had reportedly shed 20 kilos to look younger in his upcoming film Laal Singh Chaddha.