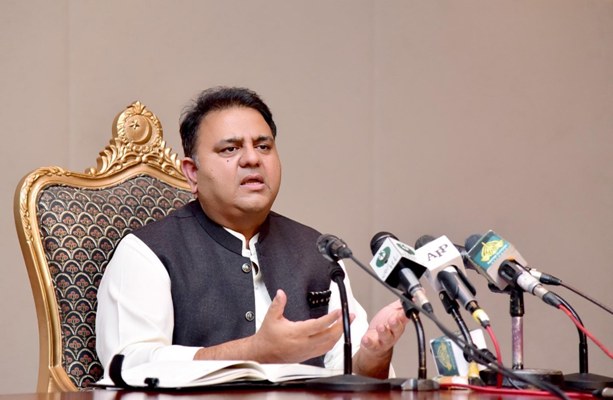 ISLAMABAD: The federal cabinet has accorded approval to distribution of Rs315 billion loans among youth under the Kamyab Jawan Programme (KJP) during the current fiscal year 2021-22.

This was announced by Minister for Information and Broadcasting Fawad Chaudhry while addressing media persons about decisions taken in the federal cabinet meeting held with Prime Minister Imran Khan in the chair on Tuesday.

The minister said about four million youth will benefit from the initiative to establish their own businesses that would resultantly strengthen the country’s economy. He said that young journalists will also be included in this programme.

Fawad said the meeting was informed that vaccination rate in Karachi and Hyderabad is very low as compared to other cities of Punjab and Khyber Pakhtunkhwa. He said the slow pace of vaccination drives in Sindh is creating problems for others. He urged the Sindh government to improve its governance instead of doing politics over the critical pandemic issue.

He said the meeting was also informed that 23 Pakistani prisoners in Saudi Arabia have returned home. He said this became possible as a result of Prime Minister Imran Khan’s special efforts for providing maximum relief and facilities to Pakistanis living abroad.

He said in this regard, Prime Minister Imran Khan has issued clear instructions that the performance of our Foreign Office staff will be linked to the satisfaction of Pakistanis living abroad.

The minister said the chairman Capital Development Authority informed the cabinet about the actions against the encroachments in Sectors E-8 and E-9 of Islamabad. In this regard, the prime minister directed to take every possible step for restoration of green areas in Islamabad.

The cabinet was also briefed on the current economic indicators. It was told that despite the corona pandemic, the country’s economy is moving in the right direction and the industrial sector is booming due to effective government policies. The minister said the inflation rate reduced to 7.4 percent while large-scale manufacturing increased by 14.6 percent.

He said that Minister for Energy Hammad Azhar briefed the cabinet about the current energy situation in the country. It was informed that load shedding during the months of June and July this year increased due to high demand and bad distribution system as previous governments did not focus on this sector.

Speaking about PML-N President Shahbaz Sharif’s recent interview, the federal minister said the leader of the Opposition in the National Assembly’s suggestion to bury the hatchet and move forward was a welcoming statement. “The government is ready to hold talks with the Opposition in the Parliament, but not with its leadership which is outside the Parliament,” Fawad said.

However, he ruled out Shahbaz’s meeting with Prime Minister Imran Khan in the near future.

“Maryam, Nawaz, Fazl, and others do not want the system to move forward,” he said, adding party leaders who are “fugitives” and reside outside the country had no right to lead their parties in Pakistan.

On the Azad Jammu and Kashmir elections, he said the polls were held under the region’s prime minister’s supervision, adding that PML-N suffered a humiliating defeat and later claimed the elections were rigged.

“How will democracy move forward when the losing party claims of rigging,” he said, reiterating that the government and Opposition need to be on the same page on several important matters.