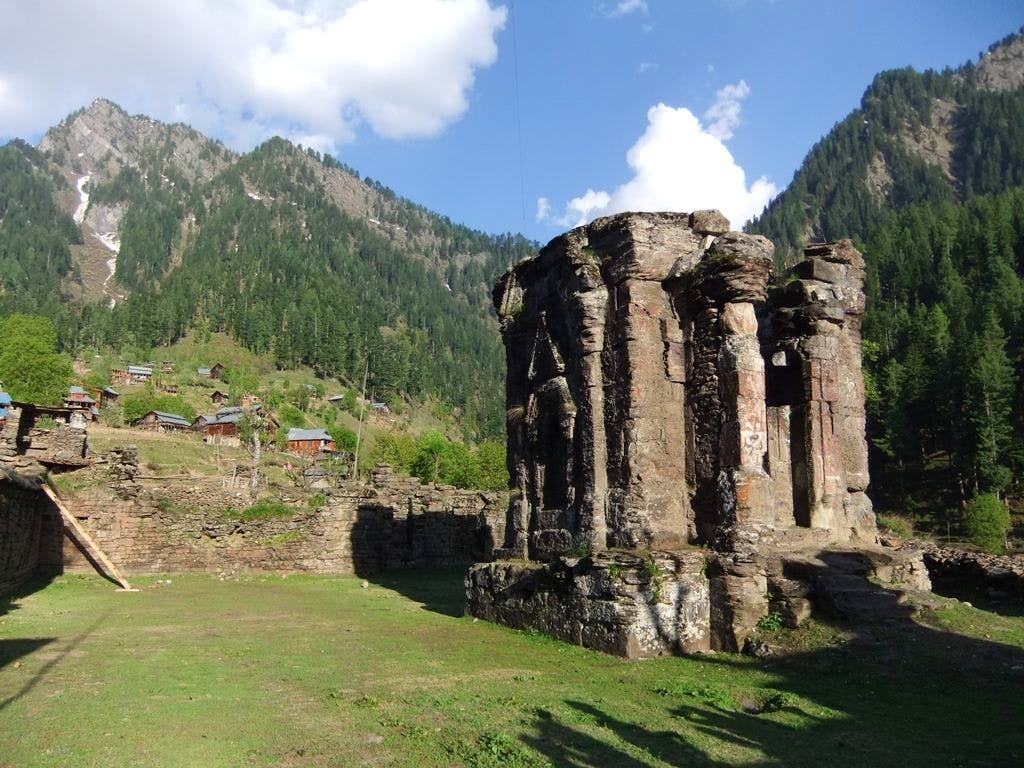 MUZAFFARABAD: Nestled in the breathtaking mountains 221 kilometres (137 miles) away from Muzaffarabad, the capital of Azad Jammu and Kashmir, lies one of the world’s ancient learning centres — Sharda Peeth.

Precariously uneven and hard to climb, the stone slabs stairs lead to a vast courtyard on the edges of the majestic Narda mountain, which once hosted a university and a rich library, like Taxila near Islamabad and Nalanda in India’s northeastern state of Bihar.

In the middle of the courtyard stone’s throw away from Line of Control, the world’s most dangerous and militarised border stands a roofless structure, nearly ruined now due to ravages of time.

The stony structure used to be the house of worship, revered by Buddhists, Jains, and Hindus.

British surveyor Charles Ellison Bated who authored A Gazetteer of Kashmir in 1873 has described that this house of worship was already in ruins when he visited the region in the 19th century.

Historians say that nearly 50,000 pilgrims used to visit the site, on the left bank of roaring Neelam River until the 11th century. The revered Madhumati River, also known as Sharda or Khutchal River, runs on the southern side of the temple.

In ancient times, pilgrims used to bathe in the “sacred” water of the Madhumati River before entering the temple.

According to Rukhsana Khan, the head of the Fine and Arts Department of Azad Jammu and Kashmir University Muzaffarabad, the site was fundamentally revered by the Buddhists as it was their place of learning before it was converted into a Hindu temple.

The 13th and 14th century Muslim Kings of Kashmir would also visit and show respect for the site, she added.

Khawaja Abdul Ghani, a local historian, and author said the house of worship had seen some restoration work in the 19th century during the reign of Hindu Dogra rulers of undivided Jammu and Kashmir.

He said that floods had washed away southern walls of the stony structure a century ago and since then was never repaired.

“In a lukewarm attempt, a mud fence was built on the wall site during the Dogra era but it collapsed soon,” he said.

A unit of the Pakistan Army, stationed nearby takes care of the site, which according to Ghani, has helped to preserve the remnants of this architectural treasure from destruction.

The main structure is approached by a staircase about 9 feet wide, of steep stone steps, some 63 in number, having on either side a massive railing, which is also falling to ruins.

Some historians believe that scholars from far-off places used to visit the place between the 6th and 12th centuries to gain knowledge.

According to historical records in the 4th century, Hsuan Tsang, the Chinese pilgrim-traveller, visited the place and found that it was a flourishing centre of education.

It is believed that this famed university was visited by Hindu seer Adi Sankaracharya who had undertaken the journey to debate with Buddhists to revive Hinduism in the eighth century.

While entering into the stony enclosure, which is said to be a temple set up by Shankaracharya, Ghani took off his shoes. A small-sized room, without a roof, is now left of the sanctum sanctorum.

Speaking to Anadolu Agency, Ghani said the site was fundamentally a house of worship revered by the followers of three religions. He has authored the book Sharda Evolution of History in the Urdu language. But he contests that the site was a full-fledged university.

“It had never been a university or learning place for the common people. Only selected students from the then elite would come here to learn about philosophy, science, and religion,” he said.

Excavators have found precious and sophisticated jewelry, tools, and artefacts representing the pre-historic era and the bronze age during the salvage excavation near the main structure.

According to Khan, who established Sharda Centre Of Learning Archaeology Cultural Heritage at the University of Azad Jammu Kashmir, in 2013, researchers also collected a variety of cultural material, which helped develop the chronology of Kashmir through archaeological findings.

It is believed that the stone slabs used in the construction of the temple had been brought from Narda peak, a contention which Khan said might be true.

“The carved stone slabs used in the construction of the temple are not found in and around Sharda. These kinds of stones are found near Saraswati Lake,” she added.

Whatever the history, driving on a battered road, just before entering Sharda, travellers get mesmerized by the panoramic snow-capped Narda peak. At the first sight, it appears like a woman laying down on the mountain’s summit with her hair untied in long strands.

Ghani said this woman in Hindu mythology is called Saraswati — the goddess of knowledge. He said the mountain hosts three high-altitude lakes whose water is considered holy by Hindus. One of them is Saraswati Lake. Others are Narda Lake — also known after Lakshmi the goddess of wealth and fortune — and Nareel Lake.

“Our region is believed to have been named after that sleeping woman or the lake,” Ghani said.

Khan, however, said that Sharda itself was like Indus River Valley Civilization and other such civilisations across the world.

“It (Sharda) is named after the Sharda script of Kashmiri language used by the inhabitants of that era,” she maintained.

Also, she said it was not sure that three lakes exist on the Narda peak.

“I have visited Saraswati lake. It’s huge, but not at all beautiful. It’s as huge as you require a motorbike or car to circumambulate the lake,” she said.

Ghani said the Sharda has been a cluster of civilisations, which has hosted Hun and Aryan civilizations. But he hastened to add that more research is required to historically endorse this theory.

“If this site (Sharda temple) is restored and conserved, it will attract thousands of Hindus and Buddhists from occupied Kashmir and the rest of the world,” he said.