Actor Aamir Khan’s daughter Ira was amazed to see a video of his father hitting the gym going viral on social media and enquired more about it. The old video was documented from the time when the actor was prepping for his role in the film Dhoom 3. In the video, the actor worked out with dumbells in his hands while his upper body was suspended in the air.

The video was shared by Poznic Training, who describes himself as Aamir Khan’s personal trainer for Dhoom 3 and PK. Ira Khan shared the video on her Instagram Stories with the caption, “What is that exercise?” Sharing the video, the celebrity trainer said, “This exercise is just TOO good for rocking the core on chest day while also working on functional strength. It’s very much a ‘work out like an acrobat’ kind of exercise, so I had Aamir do it regularly during our film prep for his role as a professional acrobat in Dhoom 3.” 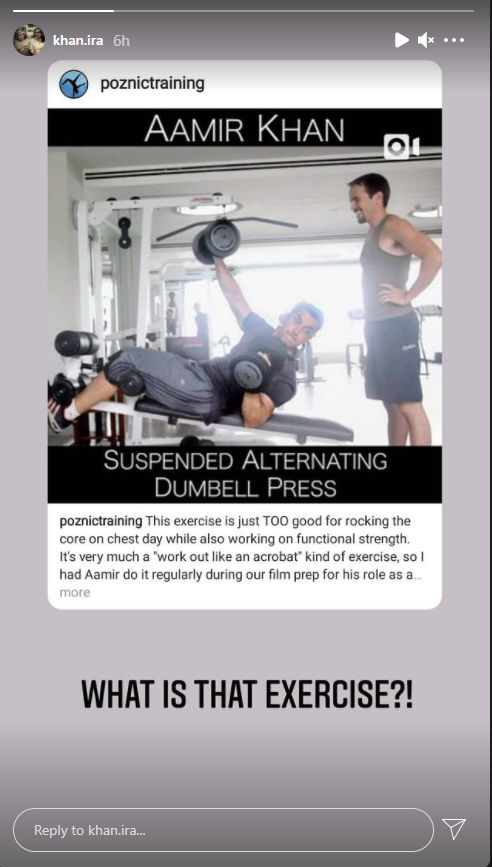 Ira, who is dating fitness trainer Nupur Shikhare, has often shared pictures and videos of them working out at home. Earlier this summer, Ira revealed she was trying to learn kickboxing. Sharing the video, she wrote, “Kick-boxing is clearly not my thing. What are my arms even doing?! Also… dropping Popeye is clearly not my thing either #fail #firstclass #surpriseattack (sic).” Ira and Nupur were recently in Himachal Pradesh while spending some quality time. The couple shared multiple posts from their trip where they can be seen playing with puppies, cycling, climbing mountains, and spending time in a quiet cafe, among other things. Aamir on the other hand, doesn’t shy away from documenting his body transformation for his roles in various films. The actor had gained weight for Dangal and had reportedly shed 20 kilos to look younger in his upcoming film Laal Singh Chaddha.

Meanwhile, on the work front, Aamir Khan is shooting for Laal Singh Chaddha, which is the Hindi remake of the acclaimed Hollywood film Forrest Gump. The actor recently shot for the film in Kashmir and Ladakh. The film also stars Kareena Kapoor and Mona Singh in pivotal roles.