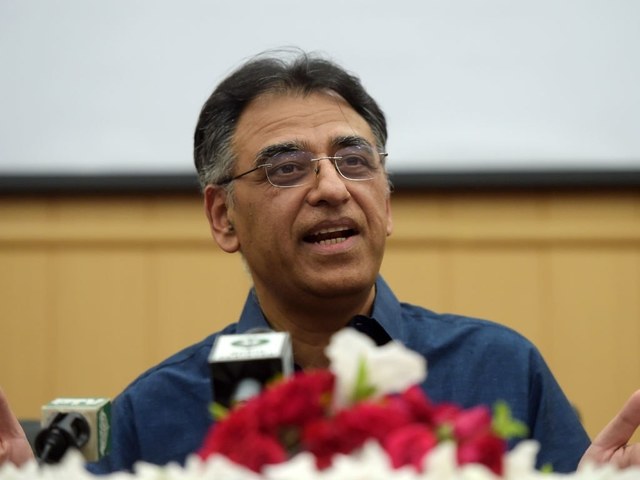 ISLAMABAD: National Command and Operation Centre (NCOC) Chief Asad Umar, on Monday, while announcing revised Covid-19 restrictions in major cities, has said that the aim to impose these targeted restrictions is to contain the spread of the coronavirus, as its fourth wave continues onslaught in the country

Addressing a press conference after a meeting of the NCOC, Umar said the government had taken “targeted and staggered” decisions to curb the virus’s spread after much deliberation in order to minimise the impact on the poor sections of society. He added that people’s livelihoods needed to be taken care of, as well as, their health.

Describing the current Covid-19 situation, he said that the virus had spread rapidly in the past week, with cases, positivity ratio and hospitalisations all witnessing a spike.

According to the minister, the latest decisions taken with the permission of Prime Minister Imran Khan would include: (i) Scaling back market closure timings from 10pm to 8pm, (ii) Closure of indoor dining; outdoor dining (till 10pm), takeaway and delivery will continue, (iii) Resumption of 50 per cent work-from-home policy, (iv) Public transport to operate with 50pc occupancy, and (v) Two days in a week to be observed as safe days which the provinces are free to choose.

The new restrictions, which will last from August 3 to August 31, will apply to Rawalpindi, Lahore, Faisalabad, and Multan in Punjab; Peshawar and Abbottabad in Khyber-Pakhtunkhwa; Karachi and Hyderabad in Sindh (after the current partial lockdown in Sindh ends on August 8); Islamabad; Muzaffarabad and Mirpur in Azad Kashmir; and Gilgit and Skardu in Gilgit-Baltistan.

Explaining the rationale for restrictions such as on indoor dining, Umar, said: “Unfortunately the permission we had given for indoor dining, mandating that only those who are vaccinated [would be allowed], it wasn’t being applied and compliance and implementation was very weak.”

“Our administration was also saying that it was not possible to go and check in every restaurant whether only vaccinated people were being allowed; that is why indoor dining is being banned.”

The new restrictions come after the Sindh government instituted a province-wide partial lockdown on Friday from July 31 to August 8 due to the rising number of coronavirus cases.

The fourth wave of the pandemic has continued its upward trajectory in Pakistan, with 5,026 cases reported on Sunday in a 24-hour period, which is the highest number of daily cases in the country since April 29, when 5,112 infections were reported.

The latest surge is blamed on the Indian Delta variant that emerged a few months ago, along with lax social attitudes, and increased activity around Eid ul Azha.