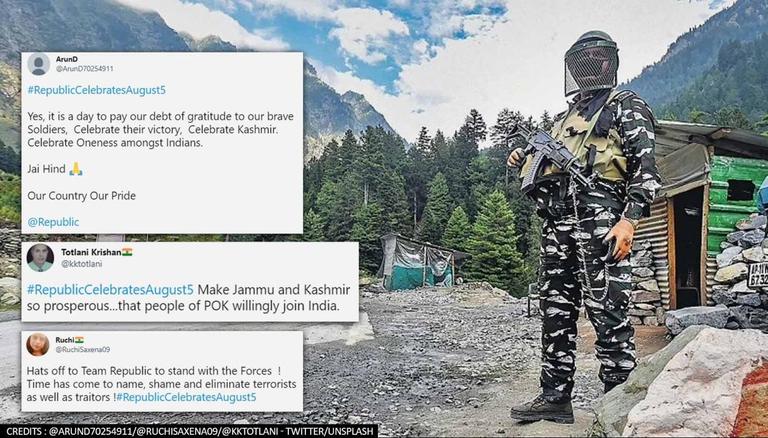 Three days before the second anniversary of the abrogation of  Article 370- an article that stood as a barrier between the complete integration of the of Jammu and Kashmir with India, a ‘toolkit’ of Pakistan was unearthed by the Republic Media Network. In the said toolkit, the Imran Khan-led Nation has chalked out its plan to mobilize global forces and lobby an anti-India agenda worldwide through the use of candle marches, protests outside Indian embassies across the world, and a massive Twitter storm in protest of the abrogation of Article 370 India.

Even as Pakistan attempts to peddle its own relevance to the topic, Republic Media Network on Monday launched a campaign that will bury that of the neighbouring country. Republic’s campaign calls for the celebration of the second anniversary of Article 370’s abrogation as a day of the full integration of India. It calls for the celebration of the entire country finally coming under the aegis of one Constitution and one National Flag, and the removal of the artifact of the past and its consignment to the rubbish bins of history, as the union territory and its neighbour Ladakh usher in a new era.

The Kashmiri people deserve this can’t wait for August 5

This is a big day for Kashmir @republic #RepublicCelebratesAugust5

We owe a lot to our brave Soldiers. Kashmir is a sacred place. Let there be Peace and Reverence of Life. Let there be a celebration of Oneness.
One Nation and One Constitution. Jai Hind 🙏🙏@Republic

#RepublicCelebratesAugust5 Abrogation of article 370 , is a gift by Narendra Modi. Nationalists in Kashmir are happy. Celebrate this day , the 5 th of , August. Some terrorists , in , in Kashmir, sympathises with ‘’ Taliban ‘’ , of Afghanistan. Development , in Kashmir can begin.

*Stone pelting reduced by 87%
*Terrorist activity reduced to 40% since 2020
*Develpoment projects underway .
* No (rogue )Porkistan flags
* #KashmiriPandits being rehabilitated back …. many more !

What was the now abrogated Article 370?

Article 370 of the Indian Constitution was a ‘temporary provision’ that granted autonomous, special status to the state. In 1947, the provision was drafted by Sheikh Abdullah, who was appointed as the Prime Minister of Jammu and Kashmir by Maharaja Hari Singh and former India PM Jawahar Lala Nehru.

Under part XXI of the Constitution that looks at ‘Temporary, Transitional and Special provisions,’ the state was accorded with the special status under Article 370. All the provisions of the Constitution applicable to other states were not applicable to Jammu and Kashmir until the abrogation of the said article by the Narendra Modi government on August 5, 2019. Along with Article 370, article 35 was also abrogated by the two houses of the Parliament, which defined who are permanent residents of the state, and barred citizens from the rest of the country from settling or buying property in the said region.