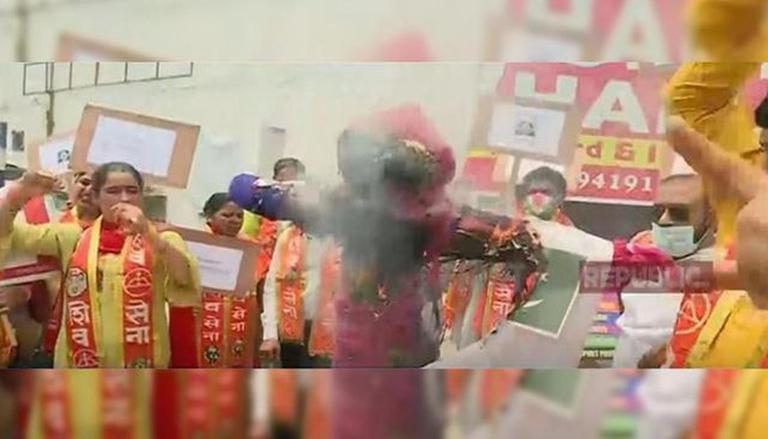 Protests have erupted in Jammu over Pakistan Government’s conspiracy to contest a cricket league in Pakistan Occupied Kashmir (PoK). People have hit the streets in Jammu against Pakistan’s attempt to hide the atrocities of its government on people in PoK by way of organising a sham cricket league. Shiv Sena has burnt the effigy of Pakistan PM Imran Khan and the flag of Pakistan as a mark of protest against the sham PoK league organised by Pakistan.

Moreover, people from across the country have called out Pakistan’s sham on social media while cricketers such as Monty Panesar have withdrawn their names from the league that is nothing more than a sham to be played on the land that has been illegally occupied by Pakistan.

Speaking on the development, Lalit Ambardar said, “The agenda is not just India centric. Pakistan is also losing the Pashtuns. The Pashtun Tahafuz Movement is becoming stronger day by day. Pashtuns across the Durand Lines (between Pakistan & Afghanistan) refuse the existence of the Durand Line as it has divided the Pashtun nation. So Pakistan is likely to lose Pashtuns. Rebellions are going on. In PoK, you saw how people are raising slogans in favour of India. So to distract the people of Pakistan, they are trying to consolidate Muslim opinions in the name of Islam and the name of Kashmir.”

Ambardar also took a pointed shot at the liberal lobby, which will wade into the issue and support Pakistan more than India. “No Indian will ever fall to this propaganda, of course, there are some left-liberals, but no nationalist Indian will ever support it. And even Pakistan people have begun to realise their propaganda and the failure of Rawalpindi and Islamabad. Pakistan is heading towards disintegration. It can only survive in the name of Islam and Kashmir. So these are desperate measures to prevent disintegration.”

What is ‘Kashmir Premier League’?

Pakistan’s sham ‘Kashmir Premier League’, the first edition of which will be played between five teams representing cities in Pakistan-occupied Kashmir (PoK) and one team representing ‘overseas’ Kashmiris, was announced in December 2020. Shahid Afridi has been named the captain of Rawalakot Hawks, confirming the league’s geopolitical mischief quotient. The other teams in the franchise tournament will be represented by international Pakistani cricketers such as Shoaib Malik, Imad Wasim, Shadab Khan, Muhammad Hafeez, and Fakhar Zaman. All matches in the competition are scheduled to be played between August 6 and August 16 in Muzaffarabad Stadium in PoK, while other former international players like Tillakaratne Dilshan and Monty Panesar have also been roped in. However, Panesar has now withdrawn his name from the league.

The following development comes after South Africa’s former cricketer Herschelle Gibbs accused India’s Cricket board of threatening him against participating in a sham cricket league Pakistan has planned in PoK. Following that the Pakistan Cricket Board (PCB) in its official release had threatened the Board of Control for Cricket in India (BCCI) to raise the matter in the ICC. However, the BCCI rapped the PCB and said that they are ‘welcome to go to ICC’

According to Herschelle Gibbs and Monty Panesar, the BCCI has warned the international players against participating in the league, or else there will be consequences if the warning is not taken seriously. According to them, the BCCI has said if the international players participate in Kashmir Premier League, they will be allowed to participate in any cricketing activity in the future. While speaking with Republic Media Network, Monty Panesar warned other players of the consequences of participating in Pakistan occupied ‘Kashmir Premier League’.