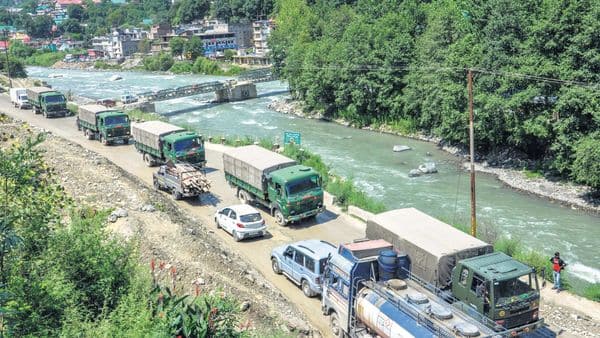 India and China on Monday said their senior military commanders had constructive talks on their lengthy border standoff but an anticipated breakthrough on the pullback of troops from two contentious areas did not happen.

According to a joint statement – that came after the 12th round of talks between the senior military commanders of India and China on Saturday – the discussions were “candid” and the two sides had an “in-depth exchange of views on resolution of remaining areas related to disengagement along the Line of Actual Control (LAC)” in Ladakh.

“The two sides noted that this round of meeting was constructive, which further enhanced mutual understanding. They agreed to resolve these remaining issues in an expeditious manner in accordance with the existing agreements and protocols and maintain the momentum of dialogue and negotiations,” it said.

In the interim, the two sides agreed “they will continue their effective efforts in ensuring stability along the LAC in the Western Sector and jointly maintain peace and tranquility,” it added.

According to two people familiar with the matter who spoke separately, the talks had seen some forward movement but some issues were still to be resolved. Neither gave any reason why an expected breakthrough on the pullback of troops from Gogra and Hotsprings areas in Ladakh – that had been anticipated – did not happen.

So far India and China have pulled back their troops from only one of many contentious areas. The disengagement of troops from Pangong Tso happened in February and was expected to provide the momentum for further cutbacks of security personnel. But that has not happened and an estimated 50,000-60,000 troops, from either side, are facing off against each other along their borders in Ladakh.

Deepender Singh Hooda, a former northern army commander said that the fact that a “high level” military meeting took place after a gap of more than three months is a “good sign.”

“However there are obvious differences between the two sides on how the disengagement should proceed. India would obviously like all the remaining areas to be addressed in one go. The Chinese are unlikely to accept this at the present moment,” he said.

Hooda was referring to two other contentious areas Depsang and Demchok in eastern Ladakh. The Depsang Plains is significant as it is situated 30 kilometres from the strategically important Daulat Beg Oldie military post with a landing strip – regarded as one of the highest in the world. It lies near the Karakoram Pass which separates India from China’s Xinjiang province. Daulat Beg Oldie is also close to the Aksai Chin area, which India and China both claim. Demchok lies south of Aksai Chin where the Chinese have reportedly erected tents on the Indian side of the LAC.

Former Indian ambassador to China, Gautam Bambawale said that it appeared “quite obvious that China is unwilling to vacate its military aggression in Eastern Ladakh and restore status quo ante. India must understand this Chinese mindset and approach the India –China relationship accordingly.”

“India needs to have its guard up and be ready for every eventuality,” he said.

Meanwhile, in another development, the Indian Navy announced on Monday that a Task Force from the Indian Navy’s Eastern Fleet would begin an “Overseas Deployment to South East Asia, the South China Sea and Western Pacific from early Aug 2021 for over two months.”

“The deployment of the Indian Navy ships seeks to underscore the operational reach, peaceful presence and solidarity with friendly countries towards ensuring good order in the maritime domain and to strengthen existing bonds between India and countries of the Indo Pacific,” the Indian Navy statement said.

“Further, they would also participate in multilateral exercise MALABAR-21 alongside the Japanese Maritime Self Defence Force, Royal Australian Navy and the United States Navy in Western Pacific,” it said. The four countries make up the Quad that calls for a free and open Indo-Pacific and a rules based order – seen as calling out China’s aggression in claiming all of the South China Sea for itself.

“These maritime initiatives enhance synergy and coordination between the Indian Navy and friendly countries, based on common maritime interests and commitment towards Freedom of Navigation at sea. Besides regular port calls, the task group will operate in conjunction with friendly navies, to build military relations and develop interoperability in the conduct of maritime operations,” the Indian Navy statement said.