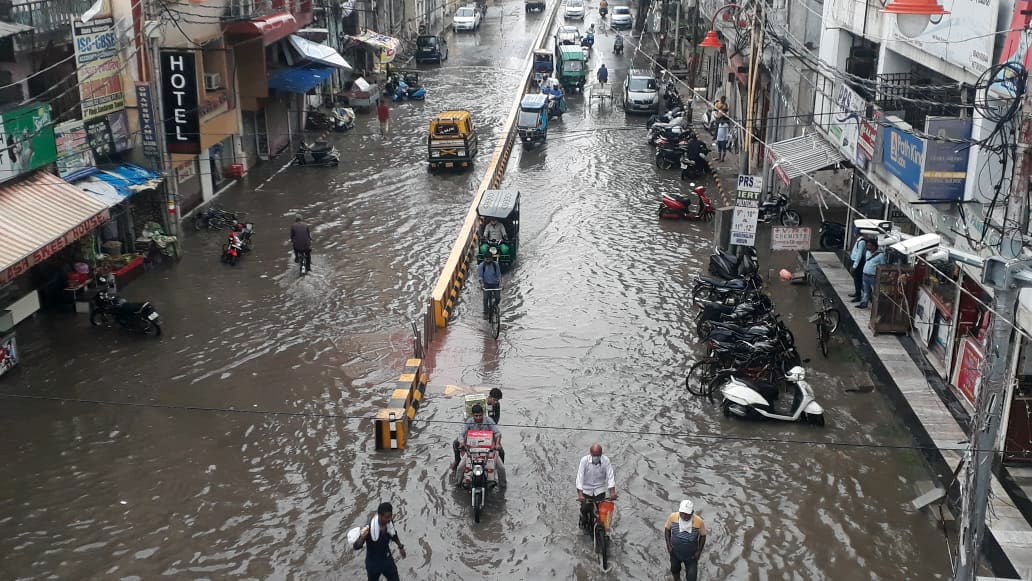 There was widespread light to moderate downpour across parts of north Indian plains and Madhya Pradesh on Monday, with the India Meteorological Department (IMD) predicting rainfall during August-September to be on the higher side of normal.

Defence aircraft were flown in to rescue people in some flooded villages in Shivpuri district of Madhya Pradesh as heavy rains lashed large parts of the state. Sixty people stranded in a flooded building in neighbouring Sheopur district were rescued after they got stuck as floodwaters entered the premises.

Rajasthan, meanwhile, has moved from deficit rainfall category to that of normal rainfall in a week, with 14 out of its 33 districts receiving normal downpour and 10 witnessing excess rains. Among other states in the region, Uttar Pradesh recorded moderate to heavy rains accompanied by thundershowers at many places.

In its forecast for the second half of the four-month monsoon season, the IMD said west Madhya Pradesh and adjoining Rajasthan, some parts of interior Maharashtra, Jammu and Kashmir, Ladakh, some parts of Punjab and Himachal Pradesh are likely to receive below normal rainfall in August.

For Delhi, the IMD said that after witnessing uncharacteristically heavy rains and an irregular weather pattern in July, the national capital is likely to receive normal rainfall in August.

The city recorded 18.1 mm downpour at Palam till 5.30 pm on Monday, and is likely to witness a light spell of rainfall on Tuesday, it said.

Rajasthan was under the deficit rainfall category last Monday but heavy to extremely heavy rainfall during the past few days has improved the situation.

The normal rainfall in Rajasthan from June 1 to August 2 is 263.08 mm. This year, the state has recorded 262.57 mm rainfall during this period, according to a report of the Water Resources department.

With 61.02 per cent more rainfall, Sawai Madhopur is under the abnormal rainfall category, while no district has come in the scanty rains category.

Baran district is facing a flood-like situation where the Parvati river is overflowing due to incessant downpour. The district administration has issued an alert in view of the torrential rains there.

In Jaipur city, many roads were submerged on Monday due to constant rains.

The Met has issued an alert for heavy to extremely heavy rainfall at some places in eastern Rajasthan districts during the next 48 hours.

The Met department has forecast rain and thundershowers at few places over on Tuesday.

In Madhya Pradesh, the Met issued red and orange alerts for 25 districts.

The orange alert warning of heavy to very heavy rainfall, thundershowers and lightning strikes has been issued for isolated places in 17 districts.

Both alerts are valid till Tuesday morning.

The Met also predicted rain or thunderstorms at most places in the districts falling under 10 divisions, including Bhopal, Indore and Jabalpur.

In Maharashtra, 18,751 families in Mahad and Poladpur talukas of Raigad district were affected by flooding and other rain-related incidents on July 22 and 23, a district official, quoting a survey.

With heavy rains causing deluge in parts of the state, Chief Minister Uddhav Thackeray said there was a need to devise a “permanent solution” to the frequent flood crisis.

Thackeray reached the flood-hit Sangli district in western Maharashtra where he visited Bhilwadi, Ankalkhop, Kasbe-Digraj and various other areas to take stock of the situation.

In Odisha, incessant rainfall in the catchment areas of the Subarnarekha river system in the past three days has caused a flood-like situation in two blocks of Balasore district.

The river’s water level crossed its danger mark of 10.36 metre at Rajghat in Jaleswar.

Ten gates of the Chandli barrage and a gate of the Galudihi barrage were opened following heavy rainfall at Jamsedpur in Jharkhand. This caused flash floods in areas near the lower course of the river, officials said.