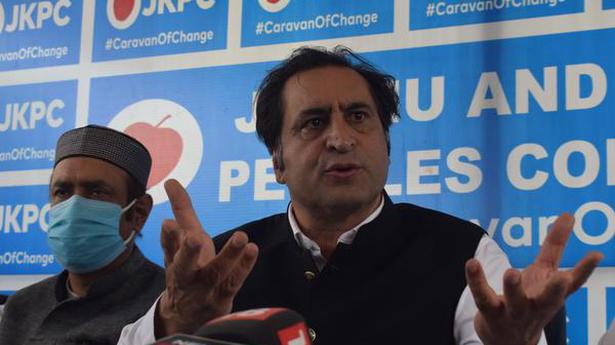 Political parties from Jammu and Kashmir on Monday condemned the government’s move to deny passports and jobs to people with “adverse police report”, especially to protesters and stone-throwers, and termed it against the spirit of Prime Minister Narendra Modi’s speech made during the all-party meeting on June 24.

“An ‘adverse police report’ cannot be a substitute for being found guilty in a court of law. A year and a half ago, the J&K police were able to create an ‘adverse police report’ to justify my detention under the Public Safety Act that would never have stood up to legal challenge. An executive order cannot replace a court of law. Guilt or innocence must be proven in court and not based on vague unproven police reports,” National Conference vice-president and former chief minister Omar Abdullah said.

Sajad Lone’s Peoples Conference (PC) termed the fresh order of the Criminal Investigation Department (CID) as a move “to give arbitrary powers” to the sleuths of the Special Branch of the CID and “appoint it as judge, jury and executioner”.

“It’s in contravention of the spirit of the speech made by the Prime Minister at the all-party meet (on June 24) where he said the distance of hearts between Delhi and Srinagar needs to be decreased. Such orders will certainly increase the alienation of the people towards the institutions of government and the psychological distance,” PC spokesman Adnan Ashraf Mir said.

Also read: Mehbooba denied passport after CID report, High Court says ‘no directions can be passed on this’

Mr. Mir said the move will pulverise the career prospects of Kashmiri youth and push them away from the mainstream of the country.

Without naming any officer, Mr. Mir said, “These officers will leave Kashmir like tourists. People scripting these laws need to look beyond two to three years of their tenures. It is our earnest appeal to the bureaucracy that they should not sow seeds of anger and poison for our future generations,” he added.

“We are undergoing a process of reconciliation wherein it is intended to absorb everyone who earlier felt alienated or disenchanted. The latest order is totally in contradiction to the promises and vision of the Prime Minister and Union Home Minister,” Mr. Bukhari said.

He said there were many cases where people have been booked for the first time under the law and order cases. “Don’t they deserve a second chance? This impatient obduracy to finish off their careers is definitely not in the national interest rather it appears to be a conspiracy to fuel a new controversy in Kashmir,” he added.

Mr. Bukhari urged the Lt. Governor Manoj Sinha to take a serious cognizance of the matter. “Keeping the changing political scenario of J&K into consideration, people thought that the FIRs would be withdrawn against the youth who are the first-time offenders. But such mindless and unwarranted decisions tantamount to rubbing salt to the injuries,” Mr. Bukhari added.

The Hurriyat, headed by Mirwaiz Umart Farooq, described the order as “autocratic”.

“After the unilateral decision of the August 5, 2019 regarding J&K, more laws are being continuously enforced. They are not only anti-Kashmir but also undemocratic,” the Mirwaiz said.

In a latest order, the J&K Police has decided to deny security clearance to those “involved in crimes prejudicial to the security of the state, including stone-pelting”. The move is likely to impact hundreds of families in Kashmir that witnessed frequent street protests in the past. Officials have listed around 20,000 protesters between 2008 and 2017.