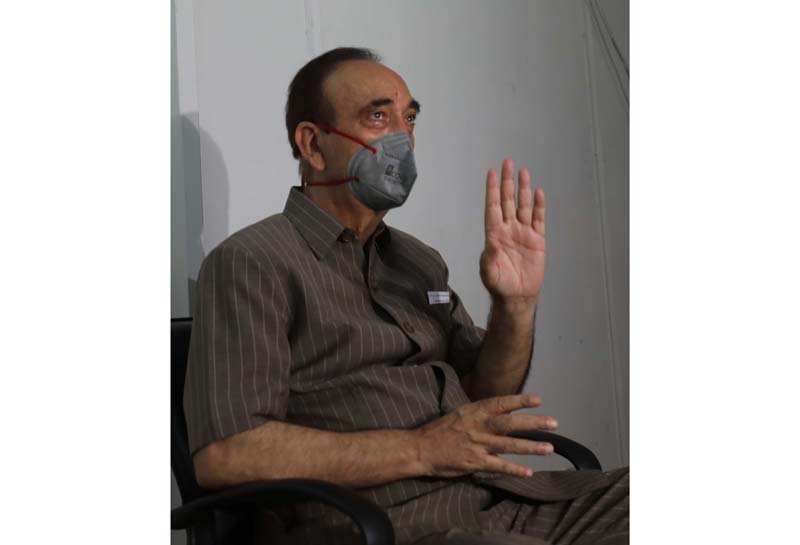 ‘PM must fulfill assurances given in All Party Meet’

Gopal Sharma
JAMMU, Aug 2: Former Union Minister and senior All India Congress Committee leader, Ghulam Nabi Azad today said that BJP led Government at the Centre must restore Statehood to Jammu and Kashmir before holding Assembly elections here for seeking good participation of people and all the political parties in this democratic exercise.

Click here to watch video
Addressing a press conference here before leaving for New Delhi today, Azad said the Government has launched Delimitation process at present. It must complete this exercise as early as possible and wind it up for the next step. Immediately after this, the next step should be to restore Statehood to Jammu and Kashmir and then hold Assembly elections here.
Justifying his point, Azad said there is strong resentment among the people of J&K against BJP led Government for breaking this historic State into two Union Territories. Some political parties have already raised voice not to participate in the elections till Statehood is restored. Moreover, this is the commitment of the Prime Minister and the Home Minister on the floor of the Parliament. Therefore, for seeking good public participation in this much awaited democratic exercise, New Delhi must restore Statehood before going for elections, Azad pleaded.
Reminding Prime Minister of his assurances during recently held All Party Meeting at Delhi, Azad said the BJP led Government must fulfill all its assurances given to the leaders of various political parties at the earliest. He said the people of J&K who are suffering a lot in the absence of public representatives in J&K, are looking towards New Delhi with great hope. He said as per assurances, the Union Government should also take appropriate steps for the return of Kashmiri Pandits to Kashmir valley and rehabilitate them properly.
Expressing serious concern over delay in addressing public issues, Azad said any form of Government can never be better than an elected popular Government by people. He said during his three day stay in Jammu, he listened to nearly 110 delegations from 37 Assembly constituencies of 10 districts in Jammu region. He met people from Congress and cross section of society and received good feedback about the issues of public including COVID preventive measures, problems they faced, vaccine issue, unemployment, economic crisis, condition of roads, water supply, electricity, education and other development related issues. The people have general complaint that mostly officers are not available for listening to their grievances. They told that for the last four years, they have been suffering in the absence of elected popular Government.
Azad pointed out that addressing people’s miseries and their burning issues, is more important than holding delimitation or democratic exercise right now. The people of J&K are suffering even before abrogation of Article 370, breaking it into two UTs. COVID also added to their miseries. There is no one to listen to their woes. They have no easy access to the officers/ bureaucrats. This is the tragedy here.
Replying to a question, Azad said development deficit has added to the miseries of the people. Many projects have been abandoned and others shelved. “The only difference between the development during our time and now is that, now a days, only proposals are made and announced in the public and during our regime, works were executed on ground,” he added.
While referring to the Peagasus snooping issue, Azad said this issue is being taken up vigorously by all the opposition political parties in Parliament and outside. Some people have also gone to the court. The spying issue is not new. Not through agencies only, the Government itself does so. He tried to downplay the issue and said he was not much influenced with it. The Government has not denied when asked by other parties. It has rather maintained silence on spying issue.
When asked about the sharp hike in the prices of diesel, petrol and fuel and no impact of protests by Opposition Congress, Azad said,” This (BJP) Govt has turned insensitive to the public issues. It is not only petrol and diesel or cooking gas, every commodity has gone out of reach of the common man. Every body knows what was the rate of diesel and petrol during Congress regime and what it is now. The Congress, other opposition parties besides members of civil society are protesting against inflation, economic crisis, unemployment but this Government is least bothered about the public sufferings. This has proved the most insensitive Government. They have nothing to do with public sufferings even if diesel crosses Rs 100 mark,” Azad asserted.
When asked whether he would lead the party during coming Assembly elections in J&K if asked by the high command, Azad said he was doing so not in J&K but in many other states for the last 40 years of his career in the party. It will not be new thing for him.
He said tourism, handicraft , horticulture Industry has been badly shattered in Kashmir and in Jammu Industry has been totally ruined. Over 7500 units were closed during last 3-4 years and huge population lost employment. Development works have stopped. There is urgent need to revive development activity, tourism and industry, provide employment to the youth and restore full normalcy in the J&K, Azad maintained.