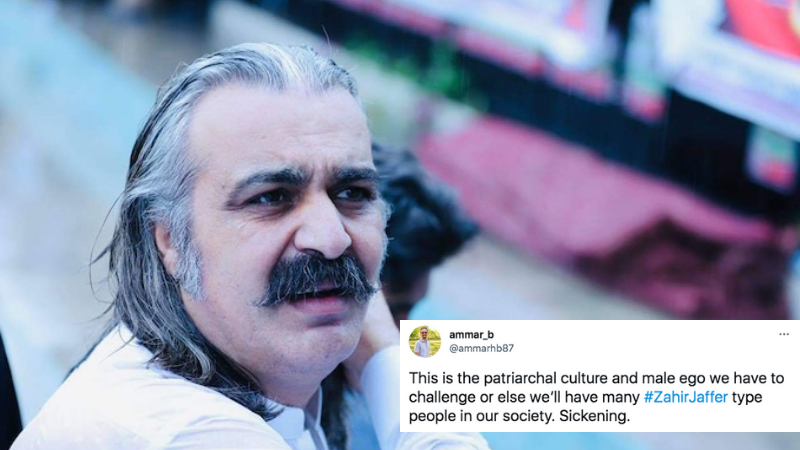 At a time when Pakistan is still reeling from a series of vicious acts of violence against women, we have yet another sexist statement against a woman to add to the string of such remarks by politicians. Federal Minister for Kashmir Affairs and Gilgit-Baltistan Ali Amin Gandapur has taken aim at PML-N Vice President Maryam Nawaz and fired off a series of sexist remarks, including claims that she has had plastic surgery worth millions.

Speaking at a public rally in Kashmir, Gandapur called Maryam a “daku rani [queen of thieves]” and claimed she had plastic surgery done worth Rs80 million and that he would “reveal her real face”.

“I have a lot more to say but I will only say this to her (Maryam) that if we come to slap then you will get slapped so much that your [real] face will be uncovered from the Rs80 million [cosmetic] surgery you have done from our [tax] money.”

The federal minister railed against her, saying, “Your grandfather’s [blacksmithing] shop in Gawalmandi didn’t have as much iron as the 32-kilogramme jewellery you were wearing when your father [PML-N supremo] Nawaz Sharif invited Modi for a wedding.”

This isn’t the first time he has made sexist remarks about Maryam. In November 2020, he spoke at a rally in Gilgit-Baltistan where he said, “She is beautiful but she spent millions on her surgeries from the taxpayers’ money”. He also said that if he picked anyone from the crowd and spent just a little from the taxpayers’ money on their surgeries they would look handsome like Hollywood actors Brad Pitt and Tom Cruise.

A video clip of the minister’s speech was shared on Twitter and led to widespread outrage.

Lawyer Reema Omer posted the video and said that the PTI should know that as long as Gandapur remains a federal minister, its claims of its “commitment” to women’s human rights and equality will ring hollow.

Users called on Federal Human Rights Minister Shireen Mazari and Foreign Minister Shah Mahmood Qureshi to take notice of the speech, given that they had tweeted earlier about the murder of Noor Mukdam and the safety of women in Pakistan.

Several journalists also took to Twitter to call him out for his deeply sexist views.

Users likened Pakistan’s politicians to inter-fighting goons. “Somebody hand them their pacifiers inko mulk chalanay k lye kyun rkha hai [why have we kept them to run our country?”

Some users went after the incumbent PTI government and said misogyny cannot be justified “on the account of economy when people feel uncomfortable even in their own homes.”

One user said this patriarchal culture must be challenged lest it produces more Zahir Jaffers. Jaffer is the man who has been arrested on charges of murdering Mukadam.

Former senator Ayesha Raza Farooq said the minister must be held accountable for this.

ANP’s Samar Bilour Haroon urged Maryam to rise above the “vile narrative” and reminded everyone that women across the country are feeling especially threatened in light of the recent acts of violence against women.

Pakistan has a culture of violence against women, said one user.

As women across the country mourn the insecurity they face, Gandapur chooses to make vile public threats against a female politician, said academic Ammar Ali Jan.

Gandapur’s words aren’t surprising, nor are the countless tweets and comments in support of his statement. The blinders are off and Pakistan — and its women in particular — have come to realise that there are people in this country with deeply sexist and deeply violent attitudes towards women.

Regardless of your politics, saying sexist things against any person is wrong. Politics has devolved into little more than glorified name calling in the past couple of weeks and it’s troubling to see people supporting Gandapur’s misogynistic statement. At a time when the country is crying for protection for its women, we have a federal minister inciting hatred against a female politician and being unbelievably sexist. If you want to call her out for her alleged corruption, do that, but why must you bash her appearance and resort to character assassination?

Pakistanis are calling for the creation of a safer space for women and you, Ali Amin Gandapur, are still making sexist statements at a public rally. Read the room, minister.