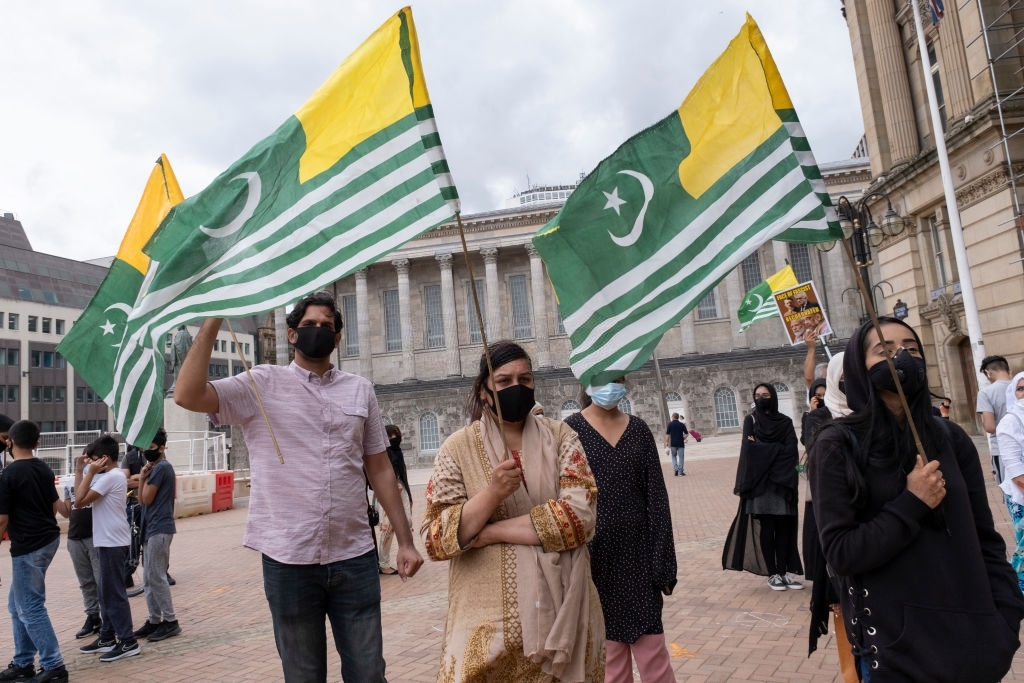 BIRMINGHAM: Thousands of miles away from Muzaffarabad, the capital of Azad Jammu and Kashmir, the election fever has taken over the Kashmir diaspora living in the United Kingdom as well.

Over 3.2 million voters in AJK are going to elect the 53-member assembly for a five-year term on Sunday (tomorrow).

Supporters of candidates and political parties contesting elections in AJK are equally aggressive in their poll campaigns far away in the UK. The reason is that there is a provision of reserving a seat for overseas nationals.

After the direct elections to 45 seats, the new assembly will vote for eight reserved seats that include five for women and one each for technocrats, religious scholars, and overseas Kashmiris.

Most Urdu-language television channels and newspapers published in the UK are full of statements and articles about the AJK elections.

Social media is abuzz with comments for and against the participating parties. It is estimated that nearly 100,000 people mainly from Mirpur city of AJK are settled in Birmingham, some 204 kilometres (127 miles) away from London.

Speaking to Anadolu Agency, Sheraz Khan, a UK-based Kashmir-origin television anchor, said the practice of giving representation to overseas Kashmiris in the assembly was started in 1985.

“It is a useful democratic exercise and it makes the political system credible and empowers the people,” he said.

But he hastened to add that the system needs reforms to make it transparent.

Back at home, there is considerable resentment against these reserved seats.

“These seats have never been filled on merit. By and large, they are distributed by the political parties as a gift to their loyalists or as a bargain to the allies’, no matter the nominees (for these seats) fulfil the criteria or not,” said Tariq Naqash, a Muzaffarabad-based political commentator and senior journalist.

He said that these seats were created by the then-government led by Prime Minister Sikandar Hayat of the Jammu and Kashmir Muslim Conference to increase his strength in the assembly.

“He (Hayat) had formed the government with the help of the then military ruler, Gen. Muhammad Zia-ul-Haq. He was having difficulties in maintaining the majority in the assembly, so he added these seats to increase his strength,” said Naqash.

Founded in 1931, JKMC is the oldest political party of the undivided Jammu and Kashmir.

The UK houses the largest Kashmir diaspora population because many people displaced from the construction of Mangla Dam near Mirpur district on Jhelum River in the 1960s took advantage of then liberal visa regime to earn livelihood in Britain.

The dam was constructed after the World Bank and few world powers brokered a water agreement called Indus Water Treaty between India and Pakistan in 1960.

These displaced people were mainly settled in Birmingham, a major city in England’s West Midlands region.

Despite being UK citizens, they have kept their roots intact and are actively involved in AJK politics, by extending support to a particular political party back home, said Khan.

But Shaukat Iqbal, a Muzaffarabad-based analyst, said while these seats were created to ensure representation to overseas Kashmiris to address the problems that they face back at their home, these seats were being used as gifts to preferred people.

“Either the hosts of the political leaders (in the UK) or their nominees get these seats,” he said.

Naqash said a wealthy hotelier from Birmingham, Javed Iqbal, a loyalist of the then Pakistani Prime Minister Nawaz Shari was nominated on the seat in the 2016 elections.

“These (overseas) big businessmen and personal friends have no interest in local politics. They want the seat to just come here for picnic and to maintain a protocol,” he said.

For other reserved seats as well, Naqash said, little-known personalities are nominated.

He cited the case of the wife of a politician from northeastern Punjab province, who was nominated on a seat reserved for women by the then ruling party to reciprocate her husband’s support to the ruling party in 2011.

Similar criteria are adopted for seats meant for technocrats and religious scholars as well, where instead of merit personal connections and family background matter.

Contrary to Pakistan, where candidates for the reserved seats are announced ahead of the elections, they are decided after the elections AJK.

Shaukat Iqbal, another Muzaffarabad-based analyst, said the reserved seats are used to build ties with allies in case of a hung assembly.