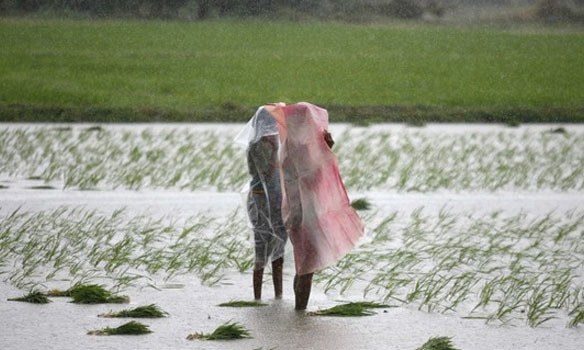 LAHORE: As the second monsoon spell wears out and the third one enters the country next Monday, farmers and water planners have reason to rejoice: showers have eliminated water shortages, helped substantially fill both major dams and benefited the entire crop cycle (rice, sugarcane, and maize).

The two spells so far have ended water scarcity that had reached close to 30pc, but provinces are now getting 26pc more than their requirement. On Friday, Sindh was getting 160,000 cusecs, Punjab 135,000 cusecs, Balochistan 14,000 cusecs and KP 3,100 cusecs. According to the Indus River System Authority (Irsa), the overall (April 1 to July 20) water shortage has come down to 12pc.

During these weeks, the Tarbela Lake rose by 57 feet; it stood at 1,431 feet on July 1 against 1,488 feet on Friday. Even more significantly, Mangla Lake jumped by 23 feet during the same period: from 1,153 feet to 1,176 feet. Both lakes, however, are still far behind their planned levels: Tarbela’s 35 feet and Mangla’s 60 feet. But Irsa considers this a much better position than what it was facing three weeks ago, and pins hopes on the next spell from Monday.

Khalid Idrees Rana of Irsa explains how the authority is caught between hope and despair. “The current situation is much better than what it was at the beginning of the month. On Friday, the authority had an inflow of 424,900 cusecs against the 312,000 cusecs it released in the system. However, the situation is not as good as it was hoped for or predicted by the Meteorological authorities. They forecast a peak of 300,000 cusecs in both rivers Jhelum and Chenab during the spell that has just ended. But what we actually got was a peak of 150,000 cusecs in Jhelum and 139,000 cusecs in Chenab. For River Indus, it hoped for a 375,000 peak flow, whereas the river did not go beyond 288,000 cusecs. We are keeping our fingers crossed for the next spell,” he said, adding that the situation had eased a bit and a lot would depend on how the next spell, expected to start on Monday night, panned out.

With no signs of shortage and instead water available in surplus, farmers, especially in the upper parts of Punjab, are happy. All three major crops under various stages of their life cycle are expected to benefit from the rains.

“Those who have sown maize early (to be followed by wheat or potatoes) would certainly see their crop turning healthy with soil cooling down and showers supplementing water requirements,” says Raja Lutfullah, a grower in the suburbs of Gujranwala.

Water is always good for rice, but with the quantum that the current spell has provided (the district received over 310 millimetre rain) the farmers may not have to switch on their tubewells for another two to three weeks. Similarly, cane crop would not need tubewells for at least two weeks. All these are water guzzlers and have their ‘one watering’ taken care of.

“Since it was sporadic, the benefits have not been evenly distributed,” Abad Khan tells his side of the story. “We (in Chichawatni) did get a shower in the city, but not even a drop in the surroundings. This has been the case in many areas, where one part received a heavy shower, but it was completely dry beyond a kilometre. In an ideal situation, it should have rained widespread, benefitting all. However, that remains a wish for the last spell.”