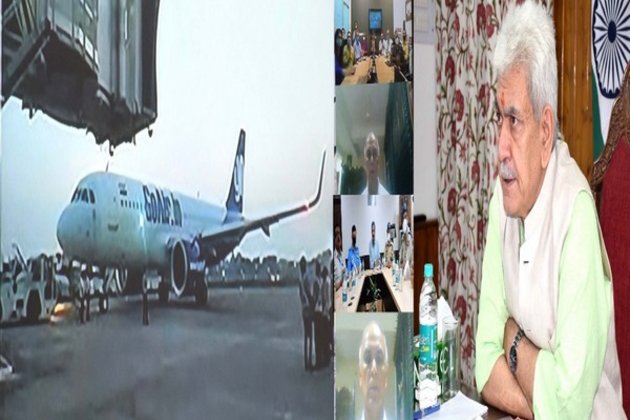 Jammu (Jammu and Kashmir) [India], July 23 (ANI): A much-awaited facility of night flight operations at the Jammu Airport was inaugurated by Jammu and Kashmir Lieutenant Governor Manoj Sinha on Friday.

Lt Governor virtually flagged off the first late-night flight of Go Air from Jammu to Delhi to mark the occasion.

As per an official statement from the administration of the union territory, he acknowledged the support of the Government of India and different agencies for coordination and ensuring the fulfilment of various procedural and on-ground facilities imperative for the start of night operations.

Sinha observed that the much-awaited facility will give relief to the passengers and in turn, will have a long term positive impact on the economy of the region.

“The commencement of the night flight operations will give impetus to the local economy, investment by enhancing the aerial connectivity and increasing tourism footfall in the region. It will also provide much-needed flexibility for residents of the Jammu division to travel to the national capital and beyond,” he added.

Pertinently, the move will also benefit the farmers of the region as the UT government has recently inked an MoU with Go Air for subsidised air transportation of vegetables and fruits from Jammu and Kashmir, with the first consignment of Srinagar cherry and Jammu lichi being dispatched to Dubai and Mumbai, respectively. The formal inauguration of the cargo facility is expected soon.

As per airport authorities, the re-carpeting work of the runway has been completed and the runway approach lighting system, which includes a series of light bars with strobe lights have already been installed and put in operation.

Accordingly, night operations have been started with all others facilities like Instrument Landing System (ILS), CAT-1 lights, PAPI, etc. as they are already installed and commissioned at the Jammu airport.

It was also informed that the extended runway of 1300 ft length has merged with the existing one, and all allied works shall also be completed by August 31, 2021.

Even though the Jammu airport had extended its operational timings in early 2019, the night flights facility in Jammu had remained a distant dream due to unwarranted delays in runway expansion work and other allied procedures that have gathered speed in the past year, read the release.