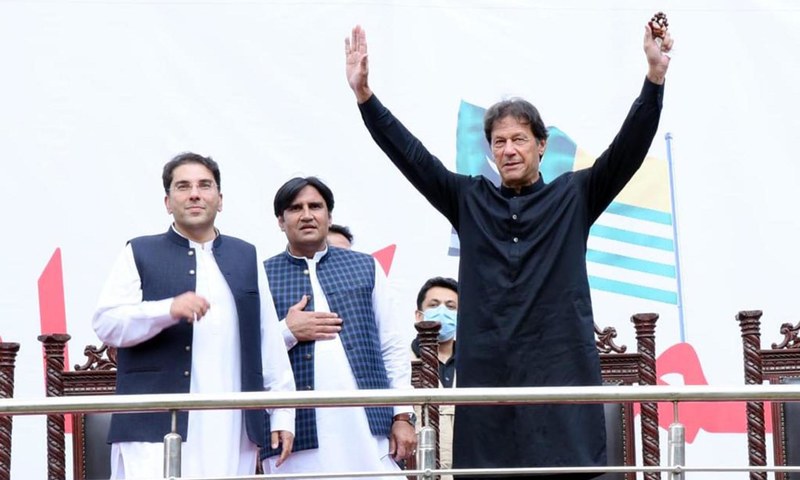 MUZAFFARABAD: Reit­e­ra­ting an earlier commitment to the Kashmiris, Prime Minister Imran Khan on Friday twice assured them that Islamabad would grant them the right to live as an independent nation if they decided to do so even after acceding to Pakistan through the United Nations-sponsored plebiscite.

Speaking at two big election rallies in the towns of Tarar Khal and Kotli on the last day of election campaign, he brushed aside allegations by his opponents that he wanted to convert Azad Jammu and Kashmir (AJK) into a province and said he did not know as to where this idea had stemmed from.

Paying tribute to the Kashmiris for their more than a century-old struggle for emancipation, he said the unprecedented sacrifices rendered by them would not go in vain and they would exercise their right to self-determination and decide to accede to Pakistan and not India through a UN-sponsored referendum.

“Afterwards, we will hold another referendum whereby Kashmiri people will be asked to decide whether they want to live with Pakistan or as an independent nation,” he said at both places in almost identical words, amid rounds of applause from the charged gatherings.

He said a nation that had waged a struggle for more than 150 years had a right to get what it wanted. “Remember, the decision has to be made by the Kashmiris themselves… And the day is not far when you will decide about your future status of your own free accord.”

He said the struggle of the Kashmiris was not for land but for their fundamental human and democratic rights to decide about their fate.

He said although the people of occupied Kashmir were going through the most difficult times of their history at the moment, he foresaw that soon India would be compelled to honour its pledge about plebiscite. “However brute force India may employ it will fail to quell the Kashmiris’ quest for freedom.”

Describing himself as an ambassador of Kashmiris, Mr Khan promised that he would raise voice for them at all international forums as well as before the world leaders and international media.

The prime minister then said to the crowd that they should put two questions to the people from the “two old parties” visiting them these days and begging for another chance (to form a government in AJK). “You should ask what they did to ameliorate the lives of people and how much fight they put up for Kashmir cause in the outside world during their respective governments,” he said.

Rather, they had befriended Narendra Modi, notwithstanding the fact he had unleashed the worst-ever atrocities on Kashmiris, added the prime minister while referring to the terrorism unleashed in occupied Kashmir and persecution of India’s minority communities by the Hindutva-driven government in New Delhi.

“I ask how many times Asif Zardari and Nawaz Sharif have taken the name of the RSS. How many times they have condemned what has been happening with the Indian Muslims. How many times have they raised their voice against the RSS ideology crushing the Muslims and other minorities.”

About Mr Sharif, he said not only had he begged attendance of Mr Modi in a wedding in his family, he had also declined to meet Hurriyat Conference leaders during a visit to India to attend Mr Modi’s swearing-in ceremony.

The prime minister referred to two books by foreign authors and asked the audience to Google them to know for themselves why Mr Sharif and Mr Zardari would not speak against India and Mr Modi.

Stating that no politician with ill-gotten money stashed in foreign lands could go against the diktats of the Western countries, PM Khan claimed that Benazir Bhutto had struck a deal with Gen Pervez Musharraf for this very reason.

Similarly, he claimed that Mr Sharif, who had thrice agreed to boycott [2008] polls, reversed his decision after receiving an order from a country where he had stashed illegitimate money that he did not want to lose.

Referring to the US drone attacks during the PPP and PML-N governments along the country’s western borders, he said though publicly Mr Zardari and Mr Sharif would condemn the attacks but in effect they had themselves allowed the US for these attacks.

“We should not blame the US. It was our own people who had allowed it because otherwise they feared the loss of their illegitimate wealth in Western countries,” he said, adding that both the leaders were not speaking against the Israeli atrocities in Palestine for the same reason.

He claimed that his government would leave no stone unturned to accomplish its mission of working for welfare of the poor and said they would get direct subsidies to buy cheap food supplies.

Rubbishing allegations by the PML-N that the AJK polls would be rigged, he asked as to how PTI or the central government could rig the polls when the government in AJK was still being run by the PML-N which had itself appointed the Election Commission and its staff.

“Everything is under their control, but rigging will be done by us,” he remarked with a smile.

The premier said his party had been asking the opposition for a year to discuss electronic voting machines. “This technology helps you get the results of polls in no time and there will not be any need for manual counting of votes and moving of the polling bags from one place to another…,” he said. “But the opposition is not willing to listen to us,” he added.

Asking people to vote for PTI in Sunday’s elections to change their fate, he said his government intended to bring people out of poverty the way China had done so over the last 30 years.

Among other things, he also promised that the government would push for exploitation of rich tourism potential in AJK so that the local youths did not need to go abroad for jobs.