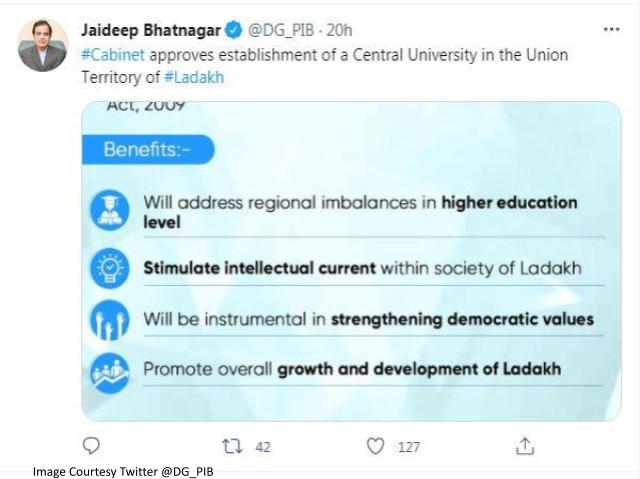 The Union Cabinet has approved the proposal to set up a Central University in the Ladakh Union Territory. The decision was taken in a meeting conducted by the Prime Minister. The decision to set up a Central University has been made with an aim to address the regional imbalances in the Higher Education level and also stimulate intellectual current within the broader society of Ladakh.

Principal Director General of the Press Information Bureau – Jaideep Bhatnagar in a tweet has stated that the Cabinet has approved the establishment of a Central University in the University of Ladakh. The bill has been introduced for amending the Central Universities Act 2009.

According to media reports, the cabinet has also approved the introduction of the – Central Universities (Amendment) Bell 2021 in the Parliament which will increase access and quality of higher education in Ladakh and also act as a catalyst for the other educational institutions in the region thereby promoting avenues for Higher Education and Research facility for the people of Ladakh.

Reports also state that the Central University in Ladakh will target the regional imbalances at the Higher Education level and stimulate the intellectual current within Ladakh and strengthen democratic values and promote the overall growth and development of Ladakh.

In the meeting conducted the cabinet has also approved the change of nomenclature & mandate of North Eastern Institute of Folk Medicine (NEIFM) as North Eastern Institute of Ayurveda & Folk Medicine Research (NEIAFMR) and a continuation of the National AYUSH Mission as a Centrally Sponsored Scheme from April 1, 2021, to March 31, 2026, with financial implication of Rs. 4607.30 crore.