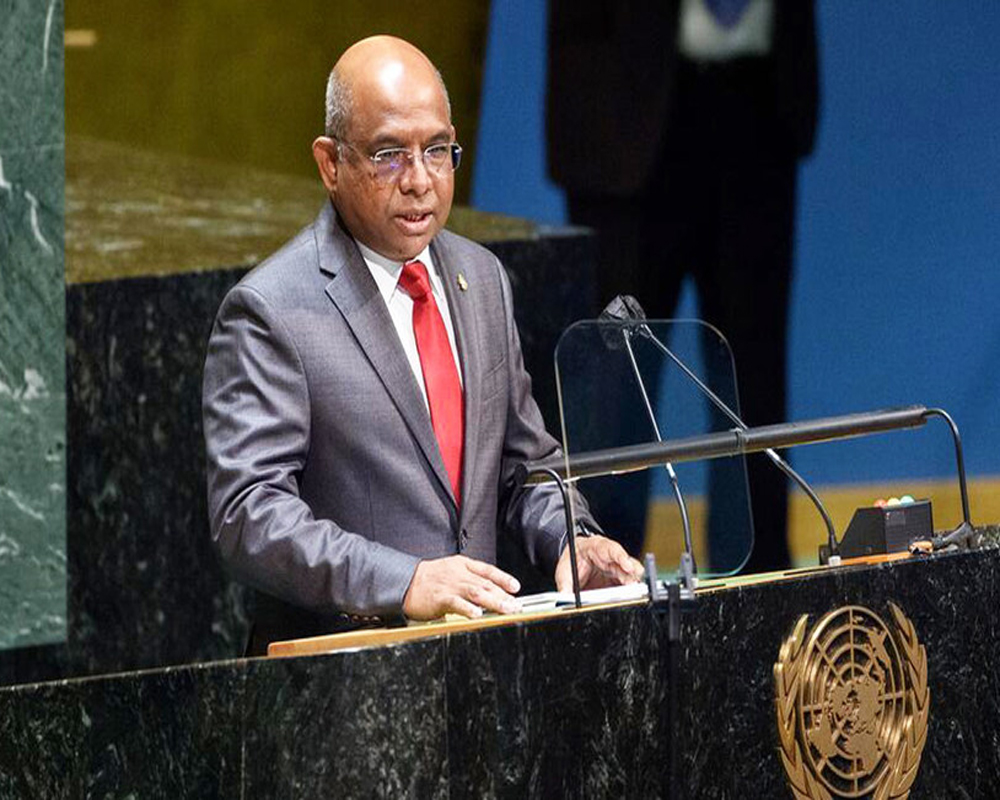 In facing the scourge of terrorism, the United Nations and the international community need to start speaking in “one voice” and demonstrate a “visible” political will by completing the ongoing work relating to dealing with the challenge, President-elect of UN General Assembly Abdulla Shahid said on Thursday.

Shahid, the foreign minister of the Maldives, told PTI in an exclusive interview that as the president of the 76th session of the UN General Assembly, he will focus on expediting work towards a convention against terrorism and even rued that a definition of terrorism was yet to be reached.

“The United Nations and the international community need to start speaking in one voice in facing the scourage of terrorism. We need that united political will and it should be demonstrated by completing the work that has been ongoing at the UN on the convention against terrorism,” he said.

“We have still not been able to reach a definition of terrorism,” he said, hoping that the work at the relevant committee dealing with the issue expedited so that much-needed unity in confronting the scourge at the political level will be visible.

Such a step will make the terrorists realise that they have no place in the civilised nations.

Shahid arrived in India on Wednesday on a three-day visit. India is the first country that he is visiting in his official capacity as the President-elect of the UN General Assembly after he was elected to the post on June 7.

Referring to various aspects of the coronavirus crisis, he described the emerging “vaccine nationalism” as “worrying” and said the UN and all its 193 members should come together to address it.

“If we fail to bring down the vaccine nationalism, we not only fail our people, we also fail the humanity because the enemy that we are fighting against is the virus. We cannot fight the virus if we start fighting ourselves,” he said, amid growing concerns over the widening gap between developed and poor countries in the availability of COVID-19 vaccines.

He said the rate of vaccination in developed and developing countries are so different and that was a need to make sure that vaccines reach all the countries.       “Because it is so clear that no one is safe until everyone is safe. That is what the pandemic has taught us.”

Referring to the evolving situation in Afghanistan, Shahid said exuded confidence that the current government in Kabul will work with all its international and regional partners to ensure that the progress achieved during the past several years will be maintained and peace and security will prevail in that country.

Asked whether he was worried about the growing friction between India and China in the wake of the border standoff in eastern Ladakh, the UNGA President-Elect said the countries should always resort to peaceful resolution of disputes and that both countries have great leadership.

“You have seen many times, there have been flare-ups on the border. But the leadership has always acted very reasonably and with great responsibility,” he said.

To a question on concerns over violation of human rights in various parts of the world, Shahid said “respecting the rights of all is one of the five ‘rays of hope’ that I am bringing in.”

“Because I believe that human rights is very important to get the trust of countries and also the people in multilateralism. The UN human rights council in Geneva and the General Assembly in New York have a complementary role,” he said.

Asked about long-pending reform of the UN Security Council, Shahid said as President of the UN General Assembly, his role will be to facilitate the member countries to build a greater consensus on the issue.

“It is a member-driven process and, therefore, I would urge the members to make sure that not only the pace of the process is increased but also greater consensus-building takes place,” he said. India has been a serious contender for a permanent seat in the UN Security Council.

“Maldives was among the initial 10 countries way back in 1970 which requested for the inclusion of an agenda in UN on the reform of the Security Council. The Maldives continues to support India for the membership of the UN Security Council,” he added.

Asked about India’s role as a regional and global power, Shahid said it is a very “special country” which has outstanding relationships not only in the region but across the globe.

“It is seen with great respect and as a country that takes its responsibility very seriously. It reaches out so generously to every part of the world which was most recently seen by how generously it has given away vaccines to so many countries when things were not very easy for India itself,” he said.

“India is a very generous and responsible country which has great respect,” he added.

On the relationship between India and the Maldives, Shahid said it has never been “better”.

“This is the highest level of relationship that we have had since President (Ibrahim Mohamed) Solih came into office. So many projects are taking place, so many contacts are being established. I think we are on the right track,” he said.