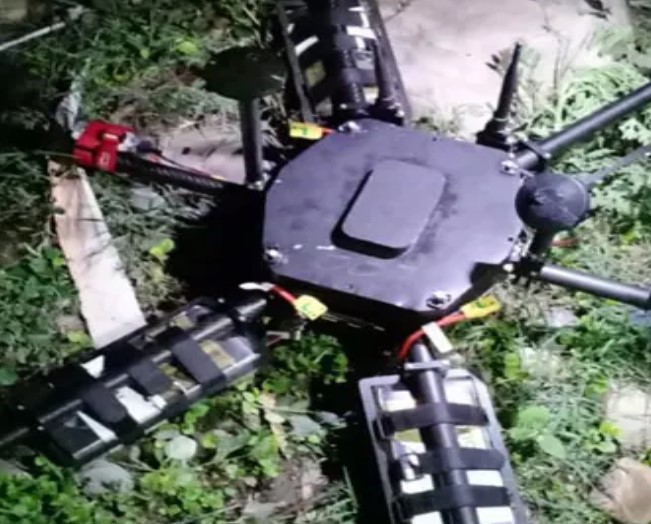 In another incident, two Lashkar-e-Taiba (LeT) terrorists were killed in an encounter at Warpora village in Sopore, Baramulla on Friday.

News agency ANI reported that the drone was shot six kilometres inside the Indian border. The drone has been identified as a Hexacopter.

According to the police, around 5 kg of explosives has been recovered from the drone.

An anti-drone system was deployed by the NSG following a drone attack on the Jammu Air Base last month. The Air Force has also taken measures to prevent any such attack on the air bases in Jammu and other parts of the country.

Following the attack on the Jammu Air Base, the number of drone sightings has increased drastically. On Wednesday, a suspected drone was spotted in the Satwari area, while earlier on July 16, a drone that was seen operating around the Jammu Air Base was picked up by the radars of the anti-drone system deployed by the National Security Guard (NSG) there.

“Terror outfits are continuously attempting to use drones for terrorist activities,” DGP Dilbag Singh was quoted by news agency PTI as saying.

Meanwhile, two Lashkar-e-Taiba (LeT) terrorists were killed in an encounter at Warpora village in Sopore, Baramulla on Friday.

Police have seized arms and ammunition from the slain terrorists.

“Both the terrorists who were killed in the encounter belonged to the LeT outfit,” Inspector General of Police (IGP) Kashmir, Vijay Kumar was quoted as saying by news agency ANI.

The IGP said that one of the terrorists has been identified as Fayaz War, who was involved in several attacks and killings of civilians and security personnel.

He was the last perpetrator of violence in north Kashmir, the IGP added.

Police further said that a top terrorist commander along with an associate was trapped in a house in Warpora village where the police and security forces launched an operation. The operation was launched on Thursday evening following specific inputs.