India has one of the strongest armies in the world. It uses many types of vehicles for combat. Among them is the Main Battle Tank. Tanks are heavily armoured mobile platforms for land weapons. They are equipped with a large-caliber tank gun mounted in a rotating gun turret. This is supplemented by machine guns or other ranged weapons including anti-tank guided missiles or rocket launchers.

They use powerful engines and tracks. These provide good mobility on various terrains and in various conditions including mud, snow and ice, where a wheeled vehicle would not be able to perform as efficiently.

The Indian army uses various types of tanks. Let’s have a look at the various tanks that our army possesses currently.

The Russian T-72 main battle tank was produced at the Malyshev HMB Plant in Kharkov, Ukraine, and at UKBM Nizhny Tagil, Russian Federation and produced under licence in a number of countries. The T-72 first entered production in 1972 and an estimated 50,000 have been built. The T-72 has been exported to Algeria, Bulgaria, Cuba, the Czech Republic, Slovakia, Finland, Hungary, India, Iran, Libya, Myanmar, North Korea, Poland, Romania, Syria and Yugoslavia.

The T-72 is powered by a V12 liquid-cooled, four-stroke multi-fuel diesel engine that develops 840 hp. It has a planetary transmission with hydraulic servo-control system, running gear with RMSH track and torsion bar suspension with hydraulic shock absorbers. The tank has a road speed of 60 km/h and 35 km/h on dry earth roads. Its range on roads with the main fuel tank is 500 km. The tank can negotiate fording depths to 1.2 m without preparation and snorkels can be fitted for fording to a depth of 5 m. It has an overall length of 6.91 m, overall height of 2.19 m and overall width of 3.58 m.

In the 1970s, the Indian Army wanted to replace its Centurion and Vijayanta main battle tanks. The Soviet-built the T-72 tank was selected after many trials. In 1978, India ordered 500 T-72, T-72M, and T-72M1 tanks directly from USSR. In the 1980s the production of the same started at Heavy Vehicles Factory, Avadi, Chennai.

There are more than 2,000 T-72 tanks (in three versions) in service in the Indian Army. The Ajeya comes in two versions:

Ajeya MK1 – This is the Indian-built version of the T-72M1, which was built at Avadi.

Ajeya MK2 – Indian version of the T-72M1 with ERA and banks of 6 smoke grenade-launchers on each side.

Indian-built T-72 Ajeya tanks are equipped with a 125 mm 2A46 smoothbore tank gun, which can fire all types of anti-tank rounds including APFSDS. The Ajeya tank also has a 12.7 mm NSV anti-aircraft machine gun. Additionally, the tank comes with a 7.62 mm PKT machine gun fitted alongside the barrel for targeting enemy infantry soldiers.

In the India China Standoff in Ladakh, the Indian Army has deployed T-72 Ajeya and T-90 tanks: The T-90 is a third-generation Russian main battle tank. It is manufactured by Uralvagonzavod in Nizhnyi Tagil, Russia. It is a modern variation of the T-72B and comes with a 125 mm 2A46 smoothbore main gun, the 1A45T fire-control system, an upgraded engine, and gunner’s thermal sight. Standard protective measures include a blend of steel and composite armour, smoke grenade dischargers, Kontakt-5 explosive-reactive armour and the Shtora infrared ATGM jamming system. It was designed and built by Uralvagonzavod, in Nizhny Tagil, Russia.

In February 2001, the Indian Army signed a contract for 310 T-90S tanks. 124 of these were built in Russia and the rest were imported as CKD kits, which would be assembled in India. India selected the T-90 as it a development of the the T-72 that India was already manufacturing. The T-72 and T-90 share 60% of their parts making it easier to maintain.

The first 42 complete Indian tanks, designated T-90S, came with older cast turrets of the early series and powered by the V-84 engine that produced 840 hp. The next year another 82 vehicles were delivered. These came with new welded turrets and the V-92S2 engine that put out 1,000 hp.

In October 2006, another contract was signed to manufacture 330 T-90S in India by Heavy Vehicles Factory at Avadi, Tamil Nadu. 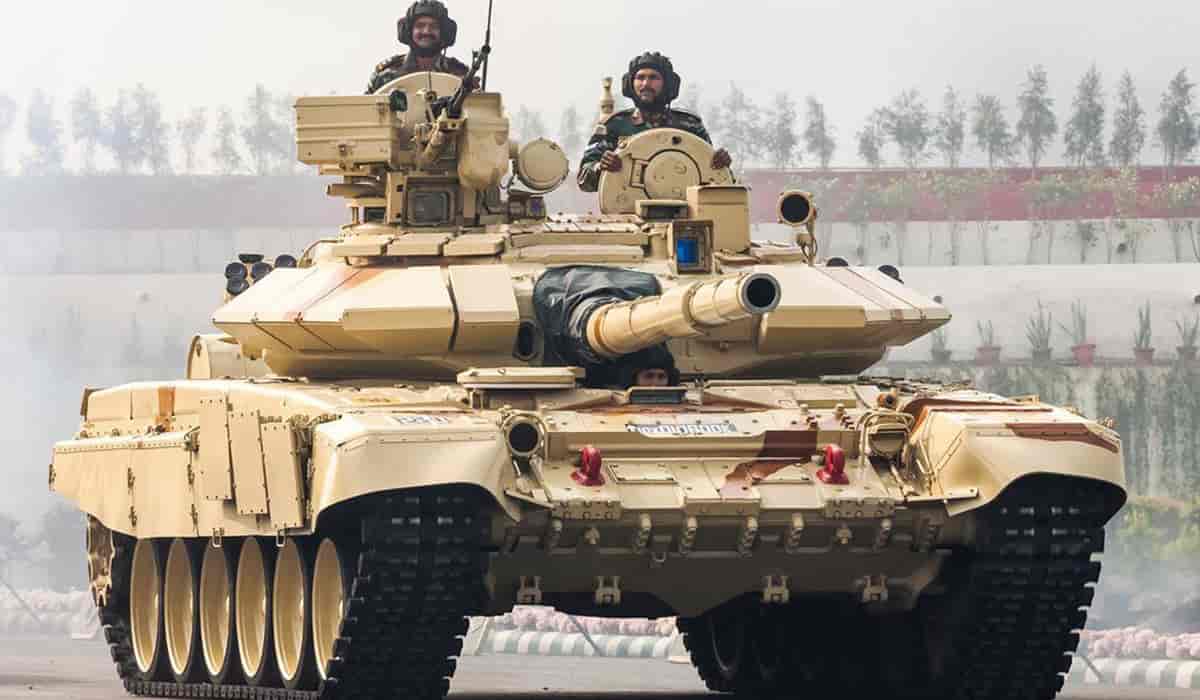 The T-90S has been codenamed Bhishma. It has been developed with assistance from Russia and France and equipped with the French Thales-built Catherine-FC thermal sights and Russian Kontakt-5 K-5 explosive reactive armoured plates. and Kontakt-5 ERA in addition to the primary armour which consists of laminated plates and ceramic layers with high tensile properties.

T-90S tank measures 9.63 m in length, 3.73 m in width and 2.22 m in height. It weighs around 46 tonnes. The tank is fed by automatic loader which deletes the need for a manual loader in the tank. The crew consists of 3 individuals including the commander, gunner and driver. In December 2007, a third contract was signed for 347 upgraded T-90M tanks. Most of these would be assembled by Heavy Vehicles Factory at Avadi, Tamil Nadu. The first batch of 10 licence built T-90M was inducted into the Indian army on August 24, 2009.

The T-90M features the ‘Kaktus K-6’ bolted explosive reactive armour (ERA) package on its frontal hull and turret-top (the T-90S has ‘Kontakt-5’ ERA), is fitted with an enhanced environmental control system supplied by Israel’s Kinetics Ltd for providing cooled air to the fighting compartment, has additional internal volume for housing the cryogenic cooling systems for new-generation thermal imagers like the THALES-built Catherine-FC thermal imager (operating in the 8–12 micrometre bandwidth). The Arjun has a 120 mm rifled main gun that can fire 8 rounds per minute. The tank also uses one PKT 7.62 mm coaxial machine gun, and a NSVT 12.7 mm machine gun. It is capable of firing several types of ammunition including indigenously developed armour-piercing fin-stabilized discarding sabot (APFSDS) and a dual purpose high explosive squash head (HESH). It can carry 39 APFSDS and HESH rounds in blast-proof canisters with blow out panels.

The Gunner’s Main Sight consists of a day-sight, thermal sight, a laser range finder and a stabilized head common to all the three channels. The common sighting head mirror is stabilized in elevation and azimuth. The day-sight provides dual magnification. A thermal imager provides night vision facility to the gunner and the commander to observe and engage target in total darkness and in the presence of smoke, dust, haze and light camouflage. Integral with the main sight is the laser range finder by which targets can be ranged accurately.