With the two armies again in a face-off at multiple points, there is apprehension of renewed clashes, reports Ajai Shukla. 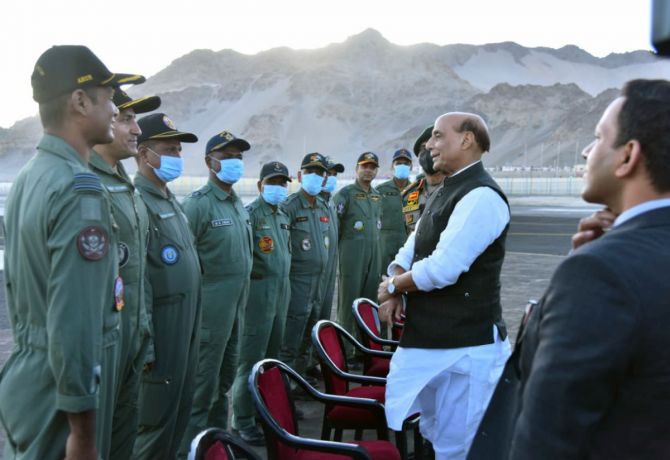 After a winter lull, Chinese troops have again crossed the Line of Actual Control in Eastern Ladakh at several places, government sources say. And there has been at least one clash between the two sides.

The altercation took place on the Galwan river, close to where 20 Indian soldiers were killed on June 15 last year. It is not known whether any casualties occurred this time.

Like in the June 2020 clash, there was a confrontation when People’s Liberation Army soldiers set up a tent at the bend in the Galwan river, near PP14. India demanded it be removed, as it was in the buffer area that both sides had agreed to.

During winter 2020-2021, the PLA had thinned out or withdrawn from many of the positions it had occupied on the Indian side of the LAC in the summer of 2020. But the freeze of winter gave way to renewed confrontation in the first week of April 2021, when Chinese drones began entering Indian airspace in large numbers, say ministry of defence sources.

In May-June, Indian patrols in Demchok and Chumar, in southern Ladakh, reported an increased presence of PLA men in civilian clothes.

In mid-May, without Indian provocation, the PLA began re-occupying many of the positions that had been vacated, boosting tensions and triggering counter deployments by the Indian Army.

With the two armies again in a face-off at multiple points, there is apprehension of renewed clashes.

Military sources say the PLA has deployed at least one, and probably two, regiments of S-400 air defence missiles, which would drastically erode India’s superiority in air power. These potent Russian missile systems have the capability to shoot down aircraft up to 400 km away, which means they can shoot down Indian aircraft anywhere in Ladakh.

There is increased PLA troop activity and deployment of modern equipment and artillery on the north bank of Pangong Lake, especially at Sirijap. Indian assessments suggest there are three PLA battalions stationed here. About three dozen new artillery pieces have also been spotted here.

The PLA has apparently flouted the February 2021 demilitarisation agreement, which had envisioned a mutual withdrawal of troops in the Pangong sector. However, in traditional PLA modus operandi, it has sent back troops to re-occupy key positions.

Indian ground reports say that in the year since June 2020, China has strengthened several of its positions, especially Rutog, which is just south of the eastern tip of Pangong Lake.

The PLA has deployed radar on tactically dominating positions, and constructed helipads, sites for surface-to-air missiles, and places for armoured vehicles. This area is well connected with roads to Ngari prefecture.

Deeper inside China, troop accommodation, including underground bunkers, has been constructed for the PLA at several locations along G-219, including Xaidullah, Kangxiwar and Dahongliutan. Each significant PLA location has a helipad and several helicopter units have been seen.

A big build-up of Chinese soldiers is in the Depsang-Daulat Beg Oldie sector at the foot of the Karakoram Pass — India’s northern tip. This sector was patrolled by Indian soldiers until spring 2020. But since April last year, the PLA has blocked Indian troops from going to their Patrolling Points (PPs) 9, 10, 11, 12 and 13.

New Delhi assesses that Depsang is the central Chinese objective. It provides Indian soldiers with a route to Road G-219 — China’s sensitive western highway that connects Tibet with Xinjiang.

It also provides the PLA and the Pakistan army with complementary thrust lines on which they can simultaneously advance and link up. This would cut off India’s northern tip, including the Karakoram Pass, Daulat Beg Oldie and the Siachen Glacier sector.

The PLA has built motorable roads from the Aksai Chin, extending deep into Indian territory. In any race to build up forces, the Chinese would win, since Depsang is India’s remotest sector, reachable only after a long journey on the newly-built Darbuk-Shyok-Daulat Beg Oldie road.

To outnumber and outgun India’s troops in the sector, the PLA is holding positions 15 km deep inside India’s border. The PLA has already brought up its newest and most modern tanks, artillery and air defence systems on its own side of the Line of Actual Control.

In the Galwan river sector, the terms of disengagement, which the two armies negotiated on June 30, 2020, regard the LAC as running through the so-called Y-Nallah Junction. This is actually a full kilometre inside India, compared with the LAC’s historical alignment next to PP-14, which the Indian Army has patrolled for decades. Now PP-14 effectively falls inside China’s ‘buffer zone’.

By measuring all distances from the Y-Junction, rather than from the traditional LAC alignment west of PP-14, the Y-Junction has been effectively regarded as the LAC point.

In the Gogra/Hot Spring sector, South of Galwan, the PLA has refused to withdraw since the time it crossed the LAC here in May 2020. Chinese troops remain deployed in the vicinity of India’s sensitive Gogra Post and are still deployed in numbers near PP 17A, half a kilometre inside Indian-claimed territory.

There is a massive Chinese build-up across the LAC from Gogra, extending from PP17 to PP23. These Chinese troops, artillery, air defence weaponry and heavy vehicles can move deeper into Indian territory at very short notice.

Meanwhile, on the South Bank of the Pangong Lake, Chinese troops have reportedly reoccupied the positions on the Kailash Range, such as Black Top and Helmet, which they had vacated. This pre-emptive step has made it extremely difficult for India to re-occupy the dominating positions it held on the Ladakh range.