‘Galwan has turned everything.’
‘The casualties on both sides alerted the Chinese to the fact that Indians are not going to take it lying down.’ 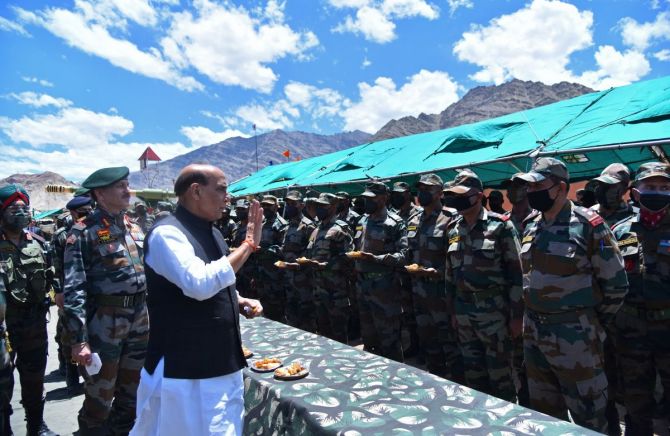 “The alacrity with which they (China’s People’s Liberation Army) disengaged in Pangong Tso is not being seen at Hot Springs or Gogra.”

“The Chinese are gaining time to build up infrastructure. They will continue to put as much pressure on India as they can,” says Lieutenant General Sanjay Kulkarni, (retd), PVSM, AVSM, SC, SM, VSM.

The General commanded a brigade and a division on the Line of Actual Control and was decorated with the Shaurya Chakra for leading his platoon to unfurl the Tricolour in Bilafondla on the Siachen Glacier.

The former chief of staff of the XIV Corps responsible for the border with China, Pakistan and the Siachen Glacier, he retired as director general, Infantry.

Recently, the PLA showed banners against the Dalai Lama’s birthday celebration around the Demchok area. What is the Chinese intention behind such actions?

There is very less water sometimes in the Indus river in that area which makes it possible for people to walk across.

Even I have seen banners by the Chinese in Demchok when I was posted there. They used to come in vehicles, show the banners and go away.

This is not alarming, but we should be vigilant.

It should not be seen in the context of intrusion or clashes.

Tibetans from the other side do come across when there is some festival. There has always been some kind of interaction. It is nothing alarming.

The one thing that really upsets and worries the Chinese is the Dalai Lama. His Holiness is a thorn in China’s side.

Over the years, the Dalai Lama has gained in stature, and goodwill not only in India but the world over.

There is a positivity around him; he is known as a good human being. People love, respect and hold him in high esteem.

The Dalai Lama does not say that Tibet is not part of China; but holds the view that Tibetans want their own identity.

Meanwhile, China has already done a ‘Han-isation’ of Tibet. The Han population is being settled and rehabilitated in Tibet.

The Chinese are building roads, schools, hospitals and infrastructure to lure the Tibetans. China feels that Tibet is not fully in their grip as Xinjiang.

In the garb of improving Tibet, they are also improving infrastructure for the PLA. It serves a dual purpose.

Tibet has 3 men per square kms and look at the volume of Chinese investment in Tibet — a railway line up to Lhasa, international standard highways, etc. These are to tell the Tibetans that China has arrived and is the centre of the universe.

By putting up banners they are showing something that has been engrained into their psyche. The people who showed the banners must have been Hans, most probably, ex-conscripts who have settled and been rehabilitated there.

They are known to get concessions in housing, shopping, health, education etc.

Given the continued deadlock on the LAC, what do you think of the situation in Ladakh right now?

The article by Ajai Shukla and tweet thereafter by Rahul Gandhi was bothersome. It was not based on truth. In a country like ours where travel is free if any clashes or intrusions had taken place, it would have been visible.

Intelligence agencies in other countries would also have picked up this information and disseminated it.

In 1984 when I was posted in Siachen, there were clashes between Indian troops and the Pakistanis in Bilafondla on June 23. The news about the clash was broadcast by the BBC on June 24 at 6.20 am!

Nobody in India knew what was going on in Siachen at that point of time, but the BBC reported that one Indian soldier has been lost in the clash with Pakistan.

If the news could be broken at that time when communication was poor, do you think such kind of news can be kept hidden in today’s time of advanced communication?

I think such an article was uncalled for and the MoD has issued a rejoinder.

Why does the Indian Army not hold regular press briefings about what is going on in Eastern Ladakh to keep the country informed? There were daily briefings during Kargil.

Kargil was a no holds barred conflict that took place on mountain heights on a daily basis.

India and Pakistan both lost soldiers.

In a war, the people of the country have to be briefed.

The Ladakh standoff is not Kargil. The situation on the LAC in Ladakh has to be managed; we don’t want to let it go out of hand.

Whatever official information is being put out is coming from the foreign ministers of both countries. I think there is no need for a daily press briefing.

There are certain things that are at the need-to- know basis and managed at the level they are being managed.

If our aim is to transform India to a modern, secure country then national security strategy must not be left to everybody. It must have a guarded, unified, and synchronised approach.

We should not give a chance to the adversary to take advantage of our democratic system as opposed to knowing nothing about them [China]. The foreign ministers of India and China met in Dushanbe recently. Do you see any forward movement to break the existing stalemate?

The alacrity with which they disengaged in Pangong Tso is not being seen at Hot Springs or Gogra.

The Chinese are gaining time to build up infrastructure. They will continue to put as much pressure on India as they can.

The meeting of two FMs may lead to the 12th round of talks (between Indian and Chines military commanders), but I don’t think anything will emerge out of it.

The Chinese have always believed that you must suck the enemy’s morale. They want to create an environment to weaken the adversary and create conditions for a resolution of conflict in their way.

They are looking at the 1959 claim line — slowly and steadily they are coming closer to it.

Galwan has turned everything. The casualties on both sides alerted the Chinese to the fact that Indians are not going to take it lying down.

They also understood that it is not going to be easy to fight them at that altitude.

The man behind the machine is of absolute importance. The Indians have a very big advantage because they are deployed right there whereas the PLA are coming from miles away to fight.

It takes a lot of time to get used to those harsh conditions. That is why the Chinese have conducted so many exercises in the last 6-12 months. These exercises are meant to familiarise and acclimatise their troops so that they can withstand the blizzardous, sub-zero tempertures and low visibility.

The commander of the Chinese western theatre command that is in charge of India reports directly to Xi Jinping.

While on the other side, the Chinese western theatre commander can pick up the phone and talk directly to man who matters.

That is one major difference.