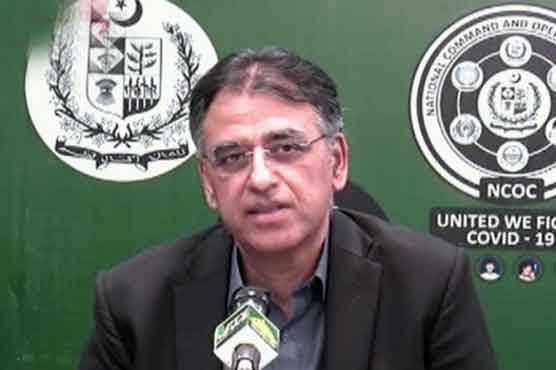 The NCOC session held with Federal Minister for Planning, Development and Special Initiatives Asad Umar in chair where the meeting reviewed implementation of standard operating procedures (SOPs) on Eidul Adha and spread of the pandemic in Karachi and Gilgit-Baltistan.

The forum was briefed that instructions have been issued to the provincial administrations of all federating units to ensure implementation of SOPs pertaining to Eidul Adha.

The forum expressed satisfaction over additional steps taken by Sindh government in view of COVID-19 outbreak.

The forum was informed that keeping in view the surging disease spread, some 500 oxygen cylinders and 30 ventilators were added in Gilgit-Baltistan.

The forum was briefed on capacity building of vaccination facilities. “At present, over half a million COVID-19 vaccines are being administered daily in the country,” the forum was informed.

The forum announced that the vaccination centers across the country would remain closed only on first day of Eidul Adha.

The forum was told that huge stocks of Moderna vaccine were provided to vaccination centers for inoculations of individuals and students going abroad.

In this regard, instructions have been issued to the administrations of all the provinces to ensure implementation of SOPs.

Earlier in a tweet, Asad Umar said that complete restrictions could only be lifted in the country until a major portion of the population fully got vaccinated against COVID-19.

“The number of people administered vaccine in a single day crossed 600,000 mark yesterday (Monday) for first time in the country”, the minister who also chairs meeting of National Command and Operation Center (NCOC) wrote.

However he said although the rising number of inoculated people is an encouraging sign but it needed further boost so that all type of restrictions in every field of life were lifted as soon as possible.

Asad Umar said the UK was an excellent lesson of vaccination minimizing health impact of COVID.

Sharing graphs in his tweet, the minister pointed out that the cases had risen in current wave in UK at about the same rate as previous wave, but number of people needing hospitalization was much less due to high rate of vaccination achieved.