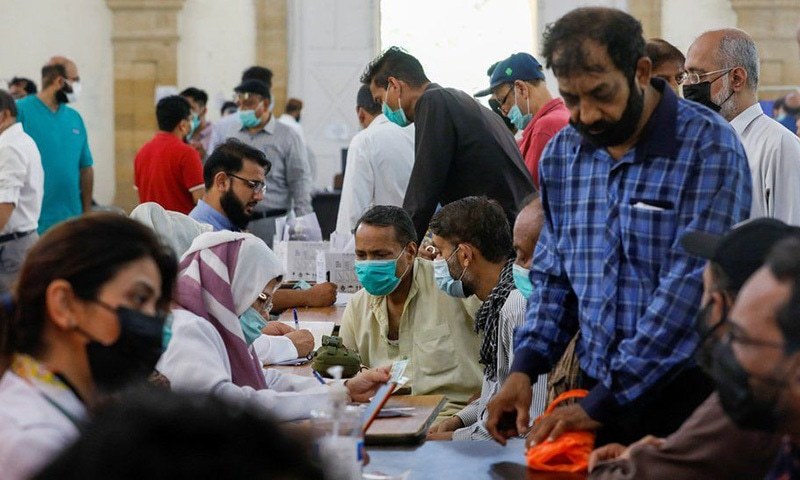 The spread of the coronavirus Delta variant is reaching alarming levels in Karachi on the eve of Eidul Azha as public and some private sector hospitals are reaching capacity and have started refusing patients, medical officials said on Tuesday.

The Sindh government said on Monday that the Covid-19 situation in the city is becoming serious, and warned people that ignoring precautionary measures during the three-day Eid holiday could make matters worse.

During the past 24 hours, the coronavirus positivity rate in the metropolis increased to 25.7 per cent, nearly five times the national rate of 5.25pc.

“Government hospitals have reached saturation point, something not witnessed during previous waves, and even some private hospitals are refusing patients,” said Dr Qaiser Sajjad, secretary general of the Pakistan Medical Association.

“God have mercy on us as people are not taking this pandemic seriously. Such irresponsible behaviour on the Eid festival will make matters worse,” Sajjad told Reuters.

The Delta variant could spread during the holiday as people travel from cities like Karachi to their home towns.

According to the Centre for Chemical and Biological Sciences at the University of Karachi, there is 92.2pc prevalence of the Delta variant in the city.

Dr Seemin Jamali, executive director of Jinnah Hospital, Karachi’s biggest, told Reuters that 77 out of its 90 coronavirus beds were occupied and it was planned to add more.

“We did not face such a capacity situation during previous waves,” Jamali said. “The situation is getting pretty bad.”

The Eid holiday and upcoming elections in Azad Jammu and Kashmir on July 25 could prove to be super spreader events, as government and opposition are busy holding big public gatherings, the two doctors warned.

Editorial: Pakistan is lucky not to have plunged into an all-out disaster yet, but Delta variant can take us there

Delta variant has ‘spread across Karachi’

“The Delta variant is highly contagious and has spread across the city,” said Associate Professor Dr Ishtiaq Ahmed Khan at the Jamilur Rahman Centre for Genomics Research at KU.

He regretted public behaviour and said people were not taking the Delta variant seriously.

“They are thinking that the fourth coronavirus wave won’t affect them as has happened during the past Covid-19 episodes. But, unfortunately, this might not be the case this time,” he said, calling for strict enforcement of SOPs.

Last week, Minister for Planning, Development and Special Initiatives, Asad Umar, said hospitals were seeing a rapid build-up in the influx of Covid patients. He had earlier warned of a fourth wave if precautionary measures were not followed.

First identified in India in March, Delta variant has spread to more than 90 countries and is also the most dominant variant in India, the United Kingdom, Russia, Israel, Singapore and more than a dozen other countries.

The variant, scientists say, has features that allow it to evade some of the body’s immune system defences. Plus, it has the highest transmissibility of any variant so far, a dangerous combination.